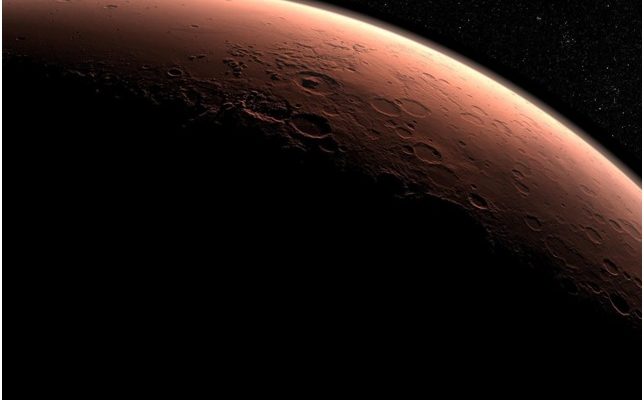 Mars has been a spot of attraction for everyone on Earth recently.  Humans are planning to go to Mars within this decade and this rejuvenated the space race among all the nations around the world once again. But the question is that, once we get there, how are we going to survive long-term?

The red planet’s atmosphere is mostly carbon dioxide (95%). The surface is very cold and the gravity is only 38% of that of Earth.  Not to mention how the surface is bombarded repeatedly by space radiation due to the absence of a magnetic field, unlike Earth. Thus, it has all the conditions that are unfavourable to human life.

How do we plan to survive on Mars? 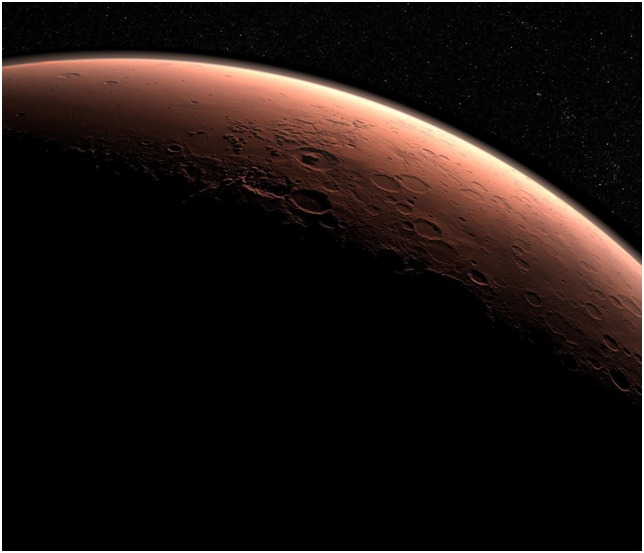 Before we answer that question, we must understand what happened to Mars in the first place. Scientists believe that Mars initially had sustainable conditions for life, with water flowing on its surface. The molten iron convecting in the planet’s core generated a powerful dynamo sending waves of magnetism out into space; creating a magnetosphere that protected it from solar radiation.

It had volcanic activities which built up an atmosphere similar to that of early Earth. The heat trapped would allow the moisture to cycle around the planet, creating the potential for life. However, over a period of time, this magnetic generation stopped due to the cooling of the planet’s core, and the planet’s surface was left vulnerable to the never-ending barrage of the Sun. The atmosphere was stripped away leaving the surface barren. The water retreated below the surface and to the polar ice caps, making Mars the planet we see today.

But scientists have a model to bring back the planet’s lost magnetism. It is one of the hardest ways, but it is the only one that is plausible with the technologies coming up within the next few decades. Mr. Jim Green, a NASA scientist proposed the idea of creating a magnetic shield around Mars to recreate its lost atmosphere, during the NASA Planetary Science Vision 2050 workshop in 2017.

The idea was to place a magnetic device at the Lagrange point (L1) of the planet. The Lagrange point is a point in space where the gravitational forces of two large body systems counterbalance one another.

Thus, objects placed at the Lagrange point tend to stay put with respect to time. On placing a large magnetic device at Mars’s L1 point, the competing gravity of the Sun and the other planets will counterbalance one another locking it into a stable position between the Sun and Mars. If enough magnetism can be generated at this point,  it will help shield Mars from a big portion of the solar radiation and space weather. 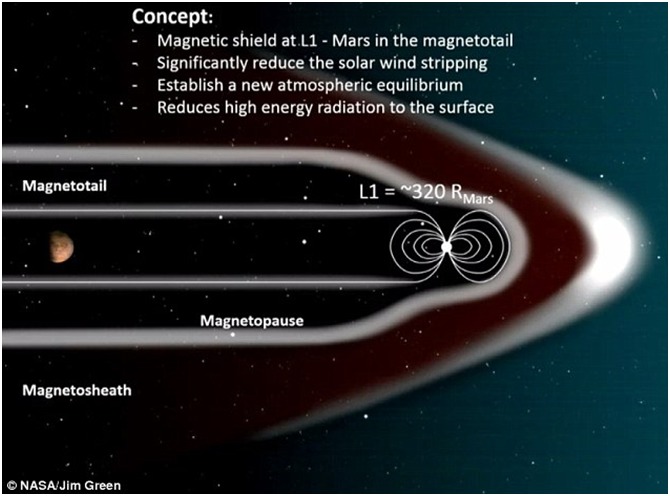 Mars will be lying at the magnetotail of this device, hence will remain protected. As the surface of Mars will no longer be stripped off by radiation, the atmosphere will start to recover and the natural outgassing from the Martian crust will be able to build up the atmosphere in a few decades.

As the planet’s atmosphere thickens, it will be able to trap heat within it hence reducing the extremes of temperature on the Martian surface. The water from the polar ice caps and below the surface will rise and fall on its surface through the process of the water cycle. This idea promises to return nearly 1/7th of the total volume of the ancient Martian ocean.

Though this idea will take care of several problems of the astronauts, it still will not be able to support human life. However, this is still not enough for life to exist on Mars.

The atmosphere on Mars will still primarily be made up of carbon dioxide hence not making it suitable for humans. Another problem will be the atmospheric pressure. We are accustomed to Earth’s atmospheric pressure of 101.3 kPa hence exposing ourselves to the 0.6 kPa of the Martian surface will be extremely dangerous resulting in instant death.

By NASA’s idea of a magnetic shield, we might be able to restore a thick atmosphere to Mars, but in order to bulk it up and make it contain the ingredients for life, we will need to supply them to the atmosphere. This is where the tough part comes up:

How to supply these ingredients?

There have been theories about supplying oxygen, out of which some have been practically successful like NASA’s Perseverance Rover which has successfully completed experiments on producing oxygen and fuel on Mars using MOXIE to convert carbon dioxide into carbon monoxide and oxygen.

However, if we look at this from a planetary scale, this method will take ages to stuff up the atmosphere and make it suitable for humans. Another theory suggests mining asteroids having large water content like Ceres. These mined resources can then be strategically aerobrake into the Martian atmosphere. As these resources burn up, the water will split into hydrogen and oxygen. The hydrogen will escape away while the oxygen will be trapped by the atmosphere.

Earth’s atmosphere is made up of 80% nitrogen, which is not only a good bonding agent but essential for the growth of plant life on the surface. This makes it the next priority on the Martian atmosphere ingredients list. Another theory suggests carrying nitrogen from nitrogen-rich space resources like Saturn’s Moon Titan. However, the technology for this scale of planetary resources transport has been left for future generations to figure out. 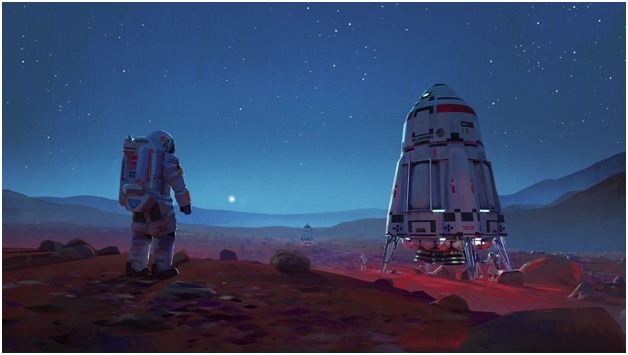 NASA has already announced its plan of sending humans to Mars by 2030 and SpaceX plans to do so by 2024 only. There is no doubt that in the coming years, we will see the first person on Mars, and soon a colony. The technologies will be more advanced and might even change our existing limitations. But one thing is certain – a bright future for human space exploration. As Carl Sagan rightfully said,

“ Exploration is in our nature. We began as wanderers and we are wanderers still. We have lingered long enough on the shores of the cosmic ocean. We are ready at last to set sail for the stars.” 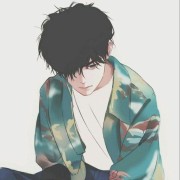