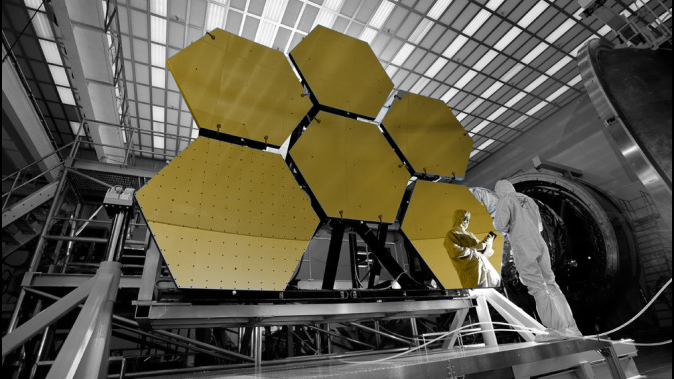 Image made through Photoshop by Palak

If you consider yourself a part of the science community but you’ve been living under a rock for the past 5 months and don’t know JWST enough to be considered ‘Webbers’, no worries! Your chain of hysterical searches has landed you at the perfect place. The significance of Sir James E. Webb can be found here. Let’s talk science, shall we…

The James Webb Space Telescope (JWST) is the finest, most advanced space telescope recently launched into space on the 25th of December, 2021. It is meant for Infrared astronomy, which is observing/studying the universe with electromagnetic radiation in the range of 600nm (visible red) to 28,000nm or 28m (mid-infrared). This is a range rather narrower and far ‘redder’ than what Hubble can observe and does not include much of the visible spectrum but this range is just right to observe: 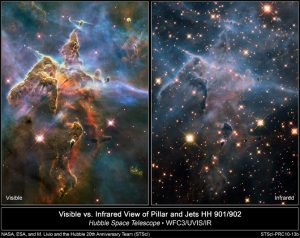 We want to peer deep into the emptiness to look further in space and hence backwards in time to the formation of the very first stars and galaxies. Due to the expansion of the universe, the light emitted from these ancestor stars is redshifted by the Doppler effect.

Visible light observations do not account for the dust clouds that generally block the object of interest. Most of the higher frequency light coming from the object gets scattered by this dust but most of the low-frequency light gets through hence observing in the ‘redder’ part of the spectrum allows one to look through the dust clouds expanding the boundaries of the research.

In comparison to stars which outshine their orbiting planets in the ultra-violet and visible region, exoplanets and even some objects in our solar system (objects in the Oort cloud) are very faint and cool enough to radiate heat in the infrared range.

Numerous challenges, some unfortunate and some fortunate events over the years came down to the telescope finally being fully crafted in October 2021. Before counting down, with the interest of the non-webbers in mind, we look into some of the engineering marvels of this piece. 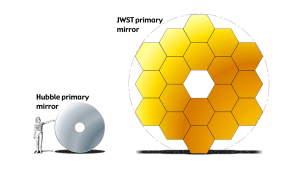 To put this into perspective, 1/10,000th thickness of a hair is approximately 7nm which means the misalignment only has a margin of 50 atoms or so. That is an amazingly reflective (shiny) surface, smoother than any telescopic non-segmented mirror so far. 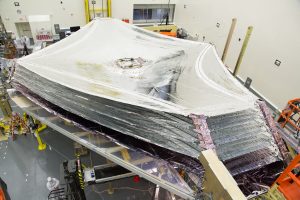 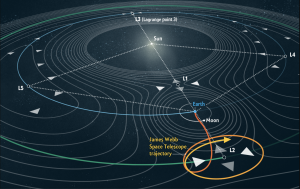 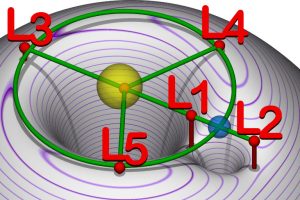 There are 4 main instruments onboard. The 3 near-infrared (NIR) instruments will work under 40K temperature, passively cooled by the sun shield and the Mid-infrared instrument (MIRI) will operate at an astounding temperature of <7K, for this, it has an active cooling mechanism.

Each detector in the NIR instruments has about 4 million pixels.

The NIRISS will be most useful in detecting exoplanet atmospheres and transits using Aperture Masking Interferometry.

As much of an engineering marvel as this telescope is, it not only has to survive the thrust and vibrations of its launch into space but also navigates to L2, unfolds automatically and survives and operates for 10 further years with no possibility for repair missions. On the 25th of December 2021, its fate was sealed. To know what happened after T-minus 2 months, tune in tomorrow for the next part!