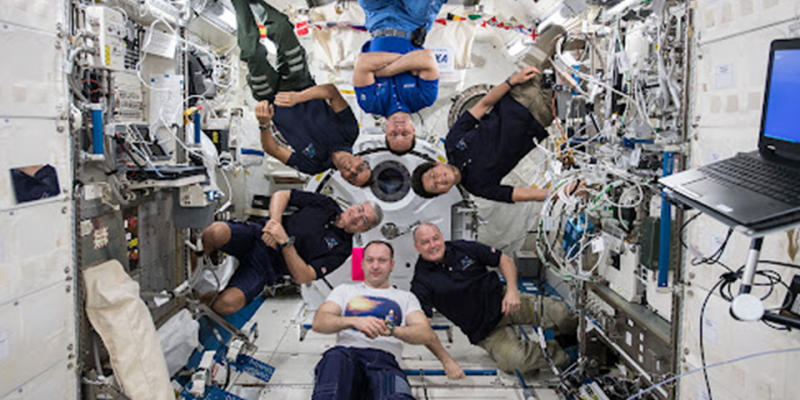 Life on a rock floating through space is hard enough as it is for some of us; throw weightlessness into the mix and voilà we have the daily life at the International Space Station.

Given the risks involved, it doesn’t come across as a huge surprise to one that the astronauts have their entire day structured (breaks are scheduled too!) to avoid any untoward accidents. While their needs are similar to ours on earth, the activities are adapted to in dramatically different ways owing to the fact that the ISS is orbiting at about 400 kilometres from the Earth. Here’s an insight into all that unravels up above the skies!

According to a 2004 report from NASA, an astronaut’s workday is from approximately 6 a.m. to 9:30 p.m. Greenwich Mean Time which includes three meals and 2.5 hours of exercise to maintain muscle tone and fitness.

The astronauts have to plan their day within this time period and also be able to face any unprecedented situation efficiently. One tricky fact is that these astronauts do not have an unlimited supply of resources meaning astronauts have to conserve resources such as water and food and waste needs to be kept to a minimum.

A typical morning in the ISS is like any other morning on Earth-only microgravity comes into play here. In other words, unlike on Earth, there is no weight pulling things downward making everything float around in Space. Once an astronaut receives a wake-up call, they set out with their personal hygiene kit to carry on with their day. 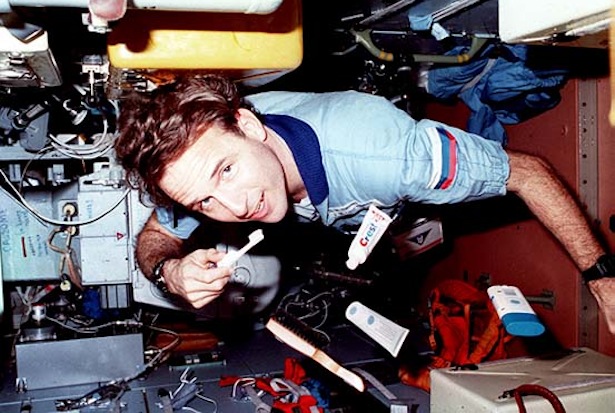 First things first, the process of brushing is slightly different in Space. Astronauts use edible toothpaste where the toothpaste can be swallowed after brushing (with a closed mouth to prevent spillage) following which a wet wipe is used to clean up.

Shampoo baths get a little interesting in Space! ‘Rinseless shampoos’ are employed to help prevent shampoo particles from floating around. Given the lack of showers, astronauts comb this shampoo through their hair. Finally for the burning question: potty breaks.

Astronauts have a personal urinal funnel that is attached to the hose’s adapter that sucks air and urine through it ending in a wastewater tank. On the other hand, they may also be required to position themselves on the toilet using leg restraints and good aim based on their requirements. The toilet works like a vacuum cleaner to suck air and waste into the commode. A feat, indeed.

Progressing into the day, the astronauts set to work duties. The astronauts aboard the ISS have a variety of tasks their job description entails them to achieve-ranging from partaking in day-long science experiments and biological experiments to watch over the reactions of their bodies and how they are acclimating to the Space environment,  overviewing scientific processes by feeding the right input and observing ground-controlled projects.

Of course, the maintenance of the ISS as a task of paramount importance goes without saying, it-it is the responsibility of the crew members to overlook the functioning of the ISS and perform regular maintenance checks. Tasks may also be assigned by the Mission Control Center which sends instructions via email or voice message to the astronauts each day about any work that may need to be done around the Space Station after monitoring the ISS from the ground.

If we were to judge how exhausting a spacewalk is from just pictures and videos, it is obvious that it is no easy feat. In other words, astronauts require a lot of strength and stamina to endure it all; which brings us to the much-anticipated subject of food and exercise in space.

Astronauts are scheduled to eat three meals a day- the usual breakfast, lunch and dinner but a variety of factors determine their quantitative intake. Meals are designed to accommodate the weightlessness in space and cater to the calorie requirements of the astronauts. In addition, there are certain foods that have to be mandatorily consumed by astronauts to help their bodies adjust in Space.

While there is no cleaning up involved because of the disposable packages space food comes in, prep time varies depending on the food type. Quick snacks like fruits can be consumed directly whereas food that requires water and heating before consumption takes relatively more time since the food is dehydrated.

Astronauts have an array of options to choose from these specially treated low mass foods as long as they meet the approved 2800 calorie requirement of the day.

Outside of diet, it is imperative for the astronauts to stay fit by exercising regularly. Having accustomed to Earth’s gravity field, the sudden lack of it in a weightless atmosphere can prove to be harmful to the human body by resulting in muscle and bone loss. 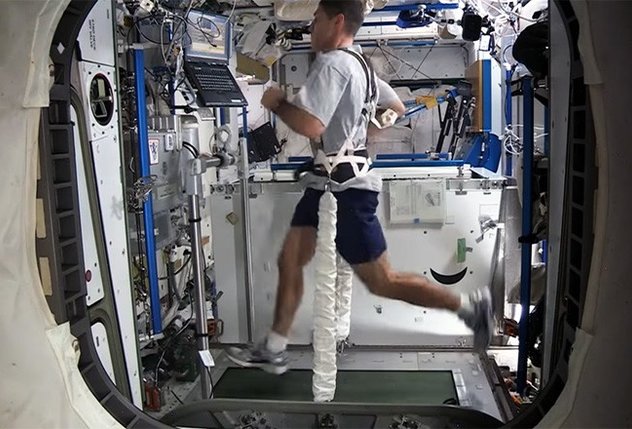 Given how laborious spacewalks are, astronauts are expected to exercise for about 2 hours every day to help stay in shape. Astronauts do some cardio using a treadmill or bike or lift lots of weight given how easily things can be lifted in space’s weightless environment. 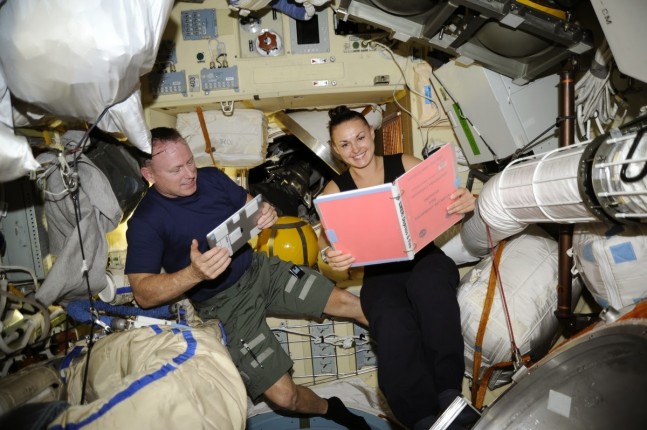 After all, all work and no play makes Jack a dull boy, doesn’t it? Apart from serious space work, astronauts spend their scheduled free time by either reading a book, watch movies, playing games with each other or simply look out their window-marvelling at the sight of the spinning earth or at the arresting sunrises and sunsets that they get the privilege of watching every 45 minutes above the earth’s atmosphere. Of course, they get their weekends off to unwind and relax after a week-long hustle. 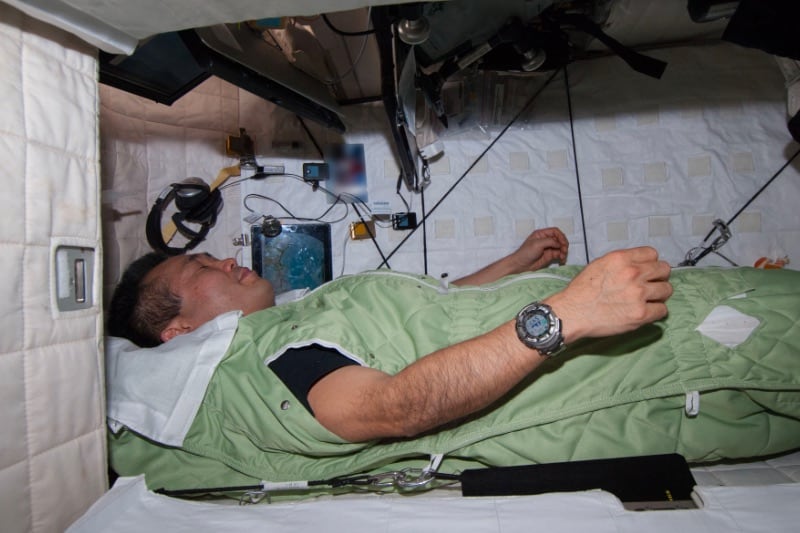 Lastly, I’m sure none of us wants to float around while trying to get a good night’s rest- the astronauts don’t either. Astronauts cocoon themselves in their sleeping bags attached to the wall (to secure the astronauts in place) located in their personal crew cabin to get some much-needed sleep for we all know that a good night’s sleep is key, especially if you’re in Space carrying out crucial studies and operations. Like us back on Earth, astronauts are usually scheduled for eight hours of sleep at the end of each mission day.

And there you go, we have a peek into the daily life of one of the most sought after jobs on the planet. Clearly, it’s equal parts daunting and thrilling- to be up there on a mission, especially given the risks involved and one can simply not admire it all. Well, I’m about to go practise sleeping in a bag because who knows how long it will be before we set civilisations up on Mars?