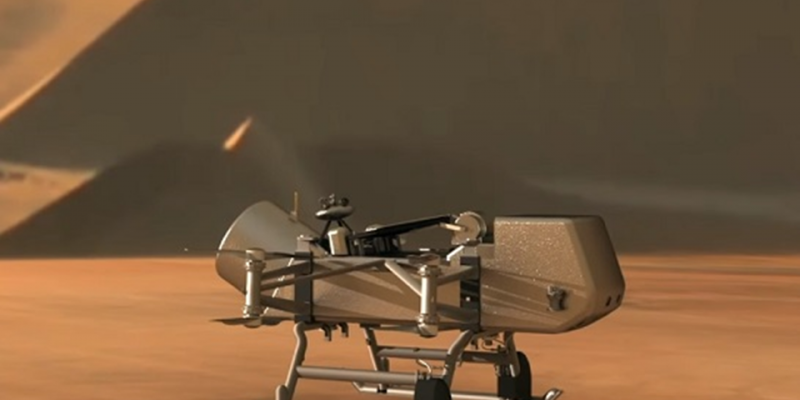 “We have at last glimpsed the surface of the fabled world, Titan, Saturn’s largest moon and the greatest single expanse of unexplored territory remaining in the Solar System today,” ~ said Carolyn Porco, leader of the imaging team of the Cassini mission after the Huygens probe reached the surface of Titan. Dragonfly mission is a dual-quadcopter (octocopter) drone that aims to explore Titan to determine conditions, organic compounds, and chemical reactions relevant to the genesis of life on Earth. It also aims to assess the possible origins and the search for ‘life as we don’t know it’ and the habitability of this organic-rich moon of Saturn.

It is scheduled to launch in 2026-2027 and will reach Titan after 8 years in the year 2034. This will be the second robotic explorer to fly on another planetary body after Ingenuity on Mars. Powered by nuclear fission, this multi-mission operation to explore multiple sites separated by many kilometres will last for two years.

The rotorcraft has four rotors on each side, making it eight so that the loss of one can be tolerated. It has two skid legs for landing and sampling. Indeed, the presence of water on the surface strengthens our search for ancient, extinct, or present life on any extraterrestrial body. However, this notion about habitable zones is highly misleading in the search for life in our Solar System.

Far away from the Sun, Saturn’s moon Titan is the only planetary body to host vast bodies of flowing liquid on its surface, which is interestingly not water, but huge seas and lakes of liquid methane and ethane.

Although interesting, we might reason about the astrobiological relevance of this moon, as it does not contain flowing liquid water on its surface. However, this organic-rich moon of Saturn is similar to the conditions which existed on the primitive Earth.

Organic compounds condense to form clouds and rain down on this moon, giving rise to a haven of interesting prebiotic chemical reactions relevant to the origins of life on Earth to take place continuously.

Studying Titan will yield valuable insights about how specific abiotic organic hydrocarbons interact with each other to possibly give rise to biologically relevant complex compounds like lipids, carbohydrates, nucleic acids, and amino acids that are important for the origins of life on Earth.

Biosignatures (evidence of ancient or present life) of ‘life as we know it’ or unique life forms which use hydrocarbons as a solvent might be present on this exotic moon. Although there’s no water on its surface, it is also an ocean world, as a huge salty ammonia-rich ocean lies beneath the rock-hard icy crust.

The dragonfly mission will utilize a wealth of data obtained mainly by the Cassini-Huygens mission and others like Voyager 1 and Pioneer 11. 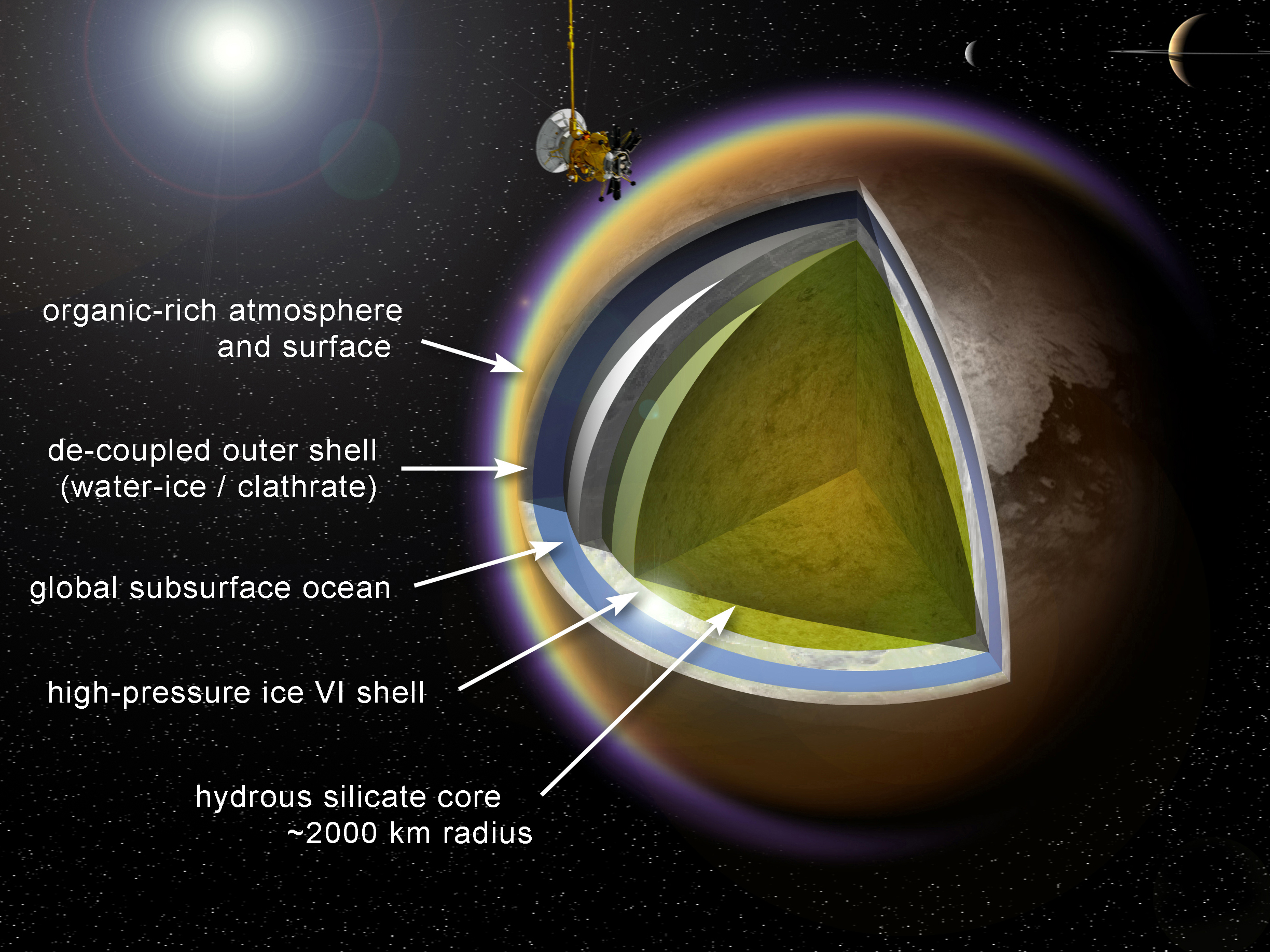 Objectives of the Dragonfly mission:

To understand the methane cycle on Titan

“On Titan, the molecules that have been raining down like manna from heaven for the last 4 billion years might still be there, largely unaltered, deep-frozen, awaiting the chemists from Earth”- Carl Sagan in the book, Pale Blue Dot.

Similar to the water or hydrological cycle on Earth, Titan has methane or ‘methalogical’ cycle, where methane from the surface condenses to form methane clouds and rain due to high pressures and low temperatures.

However, methane present in the atmosphere is broken down by solar radiation rapidly. This suggests that the methane lost by photolysis should be replenished by some biotic or abiotic processes, or else this cycle cannot be sustained.

Unexplained seasonal fluctuations of methane on Mars are observed and might be a possible biosignature. Hence, it might be replenished by methane-producing organisms unique to Titan that we are not aware of.

Studies suggest that methane trapped deep inside during the formation of Titan might be released from cryovolcanoes (ice volcanoes emitting water instead of magma), a phenomenon unique to many ‘ocean worlds’ in our solar system.

Water from the ocean beneath erupts in the form of these volcanoes, bringing interesting molecules up to the surface, which are otherwise inaccessible. Impacts from asteroids also might facilitate the same process. Dragonfly aims to determine how this methane cycle works.

These organics rain down on the surface to form bodies of liquid methane and ethane at the poles and organic dune fields at the equator. Due to low sunlight exposure, the liquids do not evaporate at the north pole whereas heaps of organics form dunes similar to sand dunes on Earth at the equator. 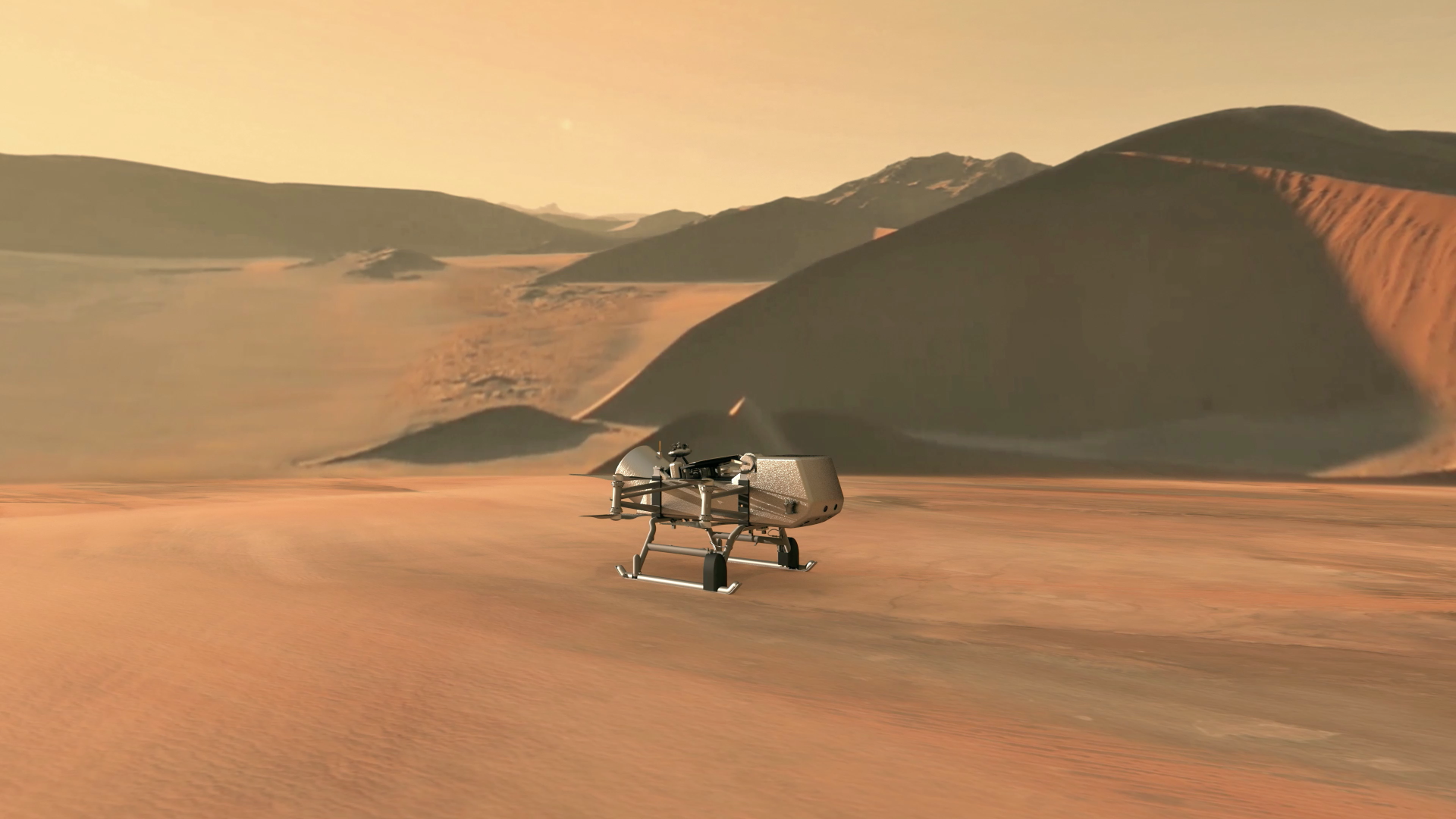 To determine the formation of organic molecules: 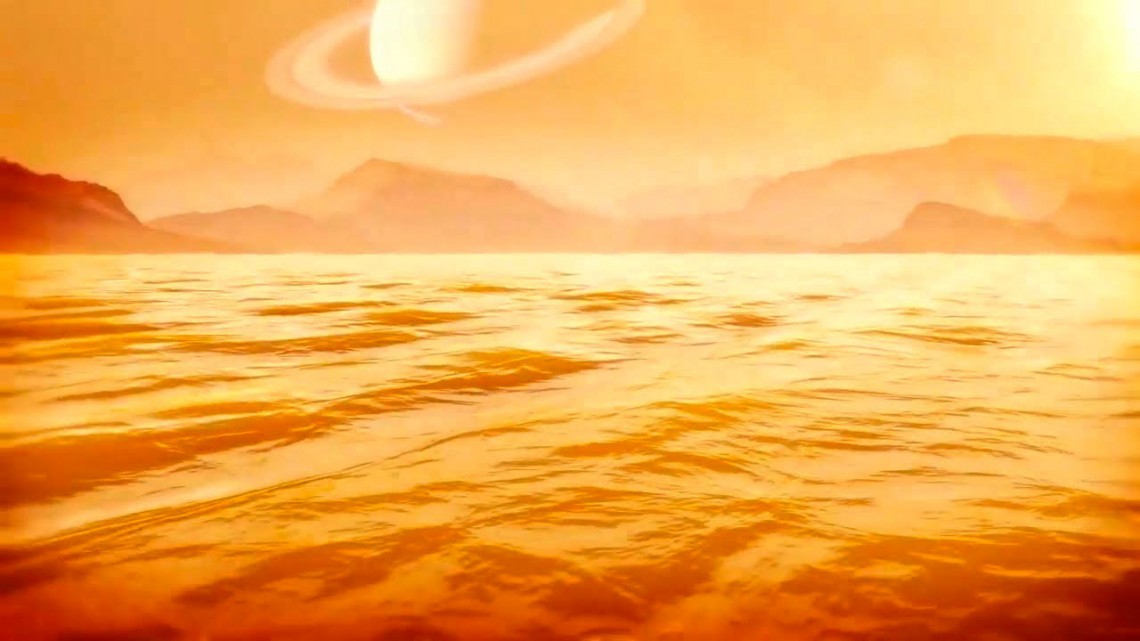 The thick atmosphere of Titan is comprised mostly of nitrogen, methane, and many organic molecules formed due to photochemical reactions.

Atmospheric data at each and every location is required to determine the sites having the highest potential for prebiotic chemistry at the surface to take place, which Dragonfly aims to conduct. 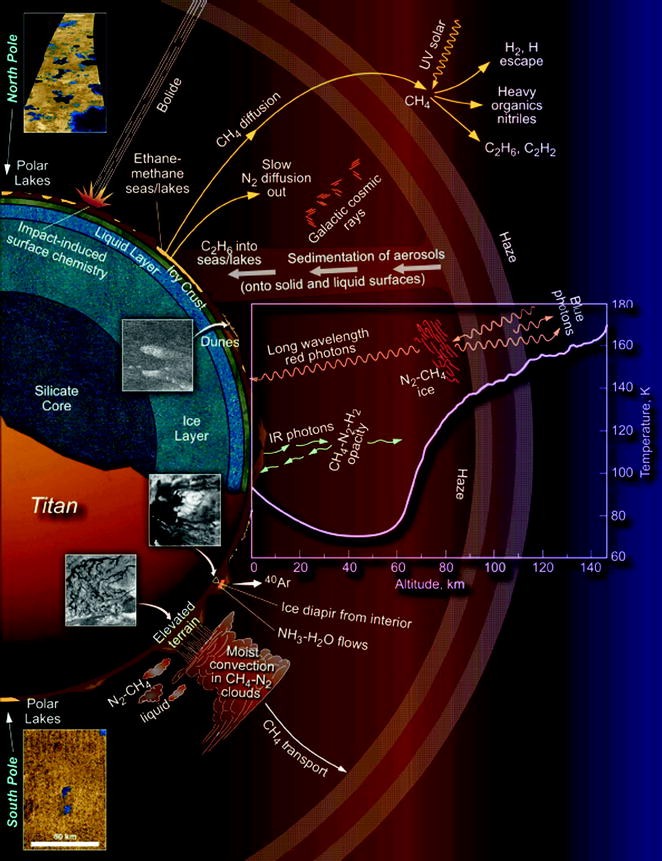 Investigation of the subsurface ocean and water-organic interactions on the surface:

Although much is known about the atmosphere of Titan due to the Cassini-Huygens mission, there is limited data about the geological and chemical processes on the surface. The atmosphere is so thick that it completely obscures the surface beneath. Imaging at certain wavelengths only has revealed a few surface features till date.

Cryovolcanoes bring up subsurface contents along with water and impact craters might contain ice melts and higher temperatures than their surroundings. Thus, they are perfect niches for this kind of chemistry to happen.

After the first powered flight by Ingenuity on Mars, Dragonfly will be the second mission to do so on Titan, though it will be much easier. Titan’s thick atmosphere and low gravity offer the lift required to fly much more easily with less energy consumption than the thin atmosphere of Mars and Earth.

This is a critical advantage for scientific exploration missions on any planetary surface, as it offers the possibility to analyze multiple distant diverse locations during its mission duration, something which is not possible using a rover.

The diversity of organic chemistry and surface materials on Titan as a whole can be adequately understood if various geological settings far apart from each other can be analyzed by Dragonfly. Dragonfly aims to explore the Shangri-La organic dune fields which also contain the Selk impact crater and possible cryovolcanoes in the equator.

Organic lakes and seas will not be accessible in this mission as they are only present at the poles. Moreover, exploring the depths of those organic bodies would require a dedicated submersible, a concept which is proposed by NASA, called TiME (Titan Mare Explorer). Landing, site exploration, and flight to another location by dragonfly (Credit-NASA)

The search for life beyond Earth and its study has been mostly focused on Mars. However, there is an immense unexplored real estate present far away from the Sun, where enigmatic organic ocean worlds like Titan, Enceladus, and Europa exist that are waiting to be explored.

Methane, a prominent biosignature, is present in huge abundance on Titan as compared to both Earth and Mars combined. These reserves of liquid methane might one day be utilized for the production of rocket fuel, where Titan might act as a refuelling station or outpost for deep space exploration.

Huge stores of organic molecules are present in Titan whereas it is extremely difficult to search for a few moles of the same molecule on Mars. These factors should make us wonder whether it’s time to shift our perspective to visualize Mars only in terms of astrobiology and explore beyond.

Thus exploring this biggest natural prebiotic chemistry lab is a matter of extreme importance as we continue to search for answers to questions like, “How did life originate on Earth?” and ponder upon the possible origins of life elsewhere in the cosmos.

Suggested Reading: What if you were born in outer space?

Objects of Antimatter may Be Lurking in the Milky Way