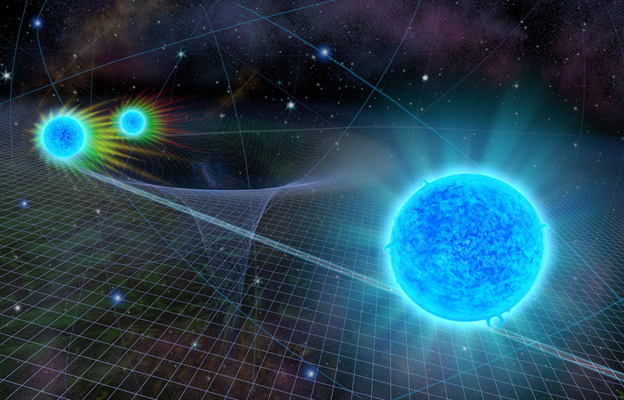 Saying that gravity is not a force seems to raise more questions than it answers. To truly understand the title, you can take a semester-long course on Misner, C. W., Thorne, K. S., Wheeler, J. A., & Kaiser, D., I. (2017). Gravitation. Princeton University Press. Or spend 15 minutes reading this.

Everything genius in this world starts with Einstein, of course, and here we are talking about his one specific thought which he did say was his most beautiful thought ever. His famous epiphany was that a person falling off of a tall building is one hundred per cent scientifically the same as that person floating in free space. In ‘physics’ terms he said both of them are inertial observers.

I suppose we all are well familiar with the term ‘inertial’ observers, but there’s no harm in dedicating a paragraph or two to going through it again.

Inertial frames can be a name given to any frame of reference where the laws of physics apply and remain the same that means if two people are said to be inertial observers then there can be no way either of them can know the difference between their frames. There is no acceleration, no pseudo-forces, their clocks tick the same way and both of them will record parameters of some 3rd frame, to be exactly the same. If you are in that inertial frame, you have no forces on you, hence you don’t feel a push or pull or weight in any direction, if you leave a ball next to you, it won’t move and if you give the ball a little nudge, it will move in a straight line in the direction of the nudge.

A non-inertial frame is a frame of reference in which you will feel being pushed or pulled or weight in a particular direction, maybe even multiple. If you leave a ball right next to you, the ball will appear to move in a direction and if you push that ball, there’s a high chance you’ll see the ball following some sort of parabolic path, which with no other frame of reference around to compare, will appear absurd to you. This does sound familiar, doesn’t it? We’ll get to that. These absurd movements can be explained by any one of the two perspectives, one where we are covering some distance per unit time squared or accelerating under a force field, one where we were supposed to be stationary but our vessel is covering a certain distance per unit time squared or accelerating and bumping into us causing us to move, making us feel we are in a force field.

The former of the two cases is what Newton assumed, based his laws upon and what was the notion until Einstein. Einstein proposed the latter to be the baseline assumption and what soon became a proven fact. Newton said that there’s a force field around every mass and/or energy which affects every other form of mass and energy. This force causes acceleration in a particular direction to whatever it is affecting. Therefore earth and all the masses in the universe have a gravitational force field around them and a person falling from the top of a tall building accelerates at 9.8  due to its mutual gravitational attraction with earth. So until the 1900s, everyone assumed a falling person or a person in the gravitational field to be in a non-inertial frame of reference since they are accelerating with respect to us, and our frame of reference was assumed to be inertial same as that to a person floating in free space. Nobody realised the basic difference between them until Einstein said that it is actually the other way around. The person falling is in an inertial frame same as the person in free space and the people stuck to earth are in a non-inertial or accelerating frame of reference, and now that we think about it, it makes sense. The person falling is weightless same as the person floating in free space. If the falling person leaves a ball beside it, it will remain at rest with respect to the person, if he gives it a nudge it will move in a straight line with respect to that falling person just like what would happen to the guy in free space away from all the forces. Now that we have proved that a person in freefall and free space are both in the same inertial frame of reference, what is in a non-inertial frame? People stationary on the surface of the earth are.

This is another perplexing thought. First, let’s redefine acceleration. Anyone with basic knowledge in physics knows that this (referring to figure 1) is the good old displacement-time graph, a straight line in that graph represents either a stationary or a uniform velocity motion and a curve in that graph represents acceleration, be it in any direction. We need to remember this, a rather simpler definition of acceleration, it is just a curve on the displacement-time graph. With this, another thing we need to remember is that everything in this universe wants to follow a path of least action meaning that every movement and every process will happen in a way that minimises wastage of energy. That path taken by anything will be the path where the change of energy from one form to another will take the least time, it may not be the shortest path but it will take the least amount of time possible.

If you look at figure 3 closely, you’ll notice that because space-time is curved in some fashion, just existing through time demands movement in space in the case of figure 3, A and B come closer together just because they are existing through time. Vertical movement in that figure spontaneously causes a change in coordinates of the horizontal axis and why do A and B have to take that very path? Because that is the path of least action and requires the least amount of time. Here’s the thing about topology, if you follow the rule of least action or try to find a path that is the least time-consuming, the path may not be a straight line or even the shortest path. Such a path of shortest time yet not the shortest distance is called a geodesic of that curved surface.

All of this explains why a falling body and a body in free space are in the same inertial frame and why we seem to attract each other in curved space-time which till now we all thought was a force. But how is a person standing still on earth, a non-inertial observer? How are we accelerating? If we are considering a body in free fall to be inertial or non-accelerating then the vessel around it should right? Us, people stationary on earth and the whole earth itself from the perspective of the falling body is accelerating upwards and also mathematically what does staying stationary on the surface of the earth means, it means our distance with respect to each other doesn’t change. That basically means in this (referring to figure 4), we draw a straight line perpendicular to the displacement (horizontal) axis. If we pause and ponder a little bit on that  (referring to figure 4) image, we realise that drawing a perpendicular to keep the distance stationary causes the line to bend towards the time axis because of the curvature and as we discussed a curved line with respect to the time axis is acceleration.

It took about 200 years of researches from Newton to Einstein and a mind able to see things from different perspectives to realise this. Till now though the general theory of relativity is still an eighty per cent proven theory, this theory is being proved to match all our experimental observations as our technology advances. Theoretically too, this theory fits our mathematical model and seems to make things easier or rather explains everything, that Newton’s theory could and couldn’t, more elegantly. Here’s to letting our minds look through things from different perspectives.