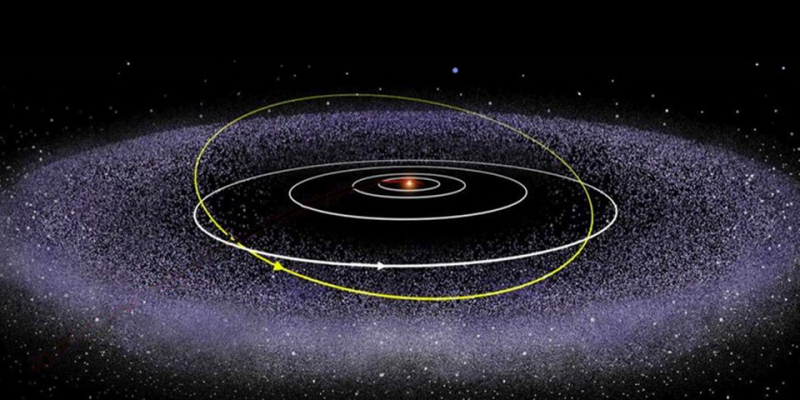 As long as humanity has been civilized, our understanding of the Universe has changed drastically with the advent of more powerful instrumentations.

Carl Sagan once wrote: There are four Cosmic questions:

The understanding of each of these questions is several decades of work, and all this work eventually concentrates on the last question.

Humans have always looked at the sky and wondered about the nature of the objects seen in the night to satisfy their curiosity. It perhaps explains why space exploration has been pursued. Moreover, this has led to significant discoveries, and one such remarkable observation ever made was the unveiling of the Kuiper Belt.

What is Kuiper Belt?

The Kuiper Belt is a vast astronomical area in our Solar System beyond the orbit of Neptune. It is also called the Third region of the Solar System or Trans- Neptunian Region. It is named after the astronomer Gerard Kuiper, who, in 1951, proposed that a belt of icy bodies might lay beyond Neptune to solve the baffling mystery of comets. The first of these strange bodies, Kuiper Belt Objects (KBOs), came to light in 1992, when finally discovered by Dave Jewitt and Jane Luu, who didn’t believe the outer solar system was empty. That discovery marked our first glimpse of “1992 QB1”– a KBO.

The belt occupies an enormous volume in our planetary system. It is stretching from30 A.U. to a point of 55 A.U. away from the sun. In many ways, it resembles the asteroid belt between Mars and Jupiter, but in contrast, the Kuiper belt is 20 times as wide and approximately 100 times as massive.

The objects that inhabit it may have a lot to tell us about the solar system’s origin. For this reason, let’s dive deep into understanding the Kuiper belt.

For the most part, it is made up of small bodies (rocks) debris of material left after the formation of the solar system. Unlike the asteroid belt objects, celestial bodies (debris, which are named Planetesimals and Asteroids) in the Kuiper Belt consist, for the most part, of volatile elements like methane, ammonia, and water.

Also, as they originate far away from the sun, so they are very icy. There may be hundreds of thousands of icy bodies larger than 100 km (62 miles) and an estimated trillion or more comets within the Kuiper Belt with at least four officially confirmed Dwarf Planets in this area, namely Pluto, Eris, Makemake, and Haumea.

1. Pluto’s Place in the Kuiper Belt (Dwarf Planets): For decades, Pluto was regarded as the ninth planet of a solar system. Named after the Roman god of the underworld, this also happens to be the name of a beloved cartoon dog in the Mickey Mouse show, which may explain the public backlash when it was eventually declared in 2006 that Pluto is not a planet. Far from any sentiment, this decision had a firm logical basis:

This understanding led to an insight that rather than adding dozens of new planets to the Solar system, we should revise the definition of the word planet. We decided that to qualify as a planet, an object must clear the region, or other debris, near its orbit.

As Pluto was surrounded around and beyond by planetesimals, some of which are similar in size and composition and also have their satellite, it was determined that Pluto should not qualify as a planet, but will rather be referred to as a Dwarf planet, as will the other several objects in the Kuiper Belt. Thus, Pluto is one of the four dwarf planets in this region.

2. It is thought that several moons in the solar system also originated from the region of the Kuiper Belt and were captured by planets like Triton around Neptune and Phoebe around Saturn. 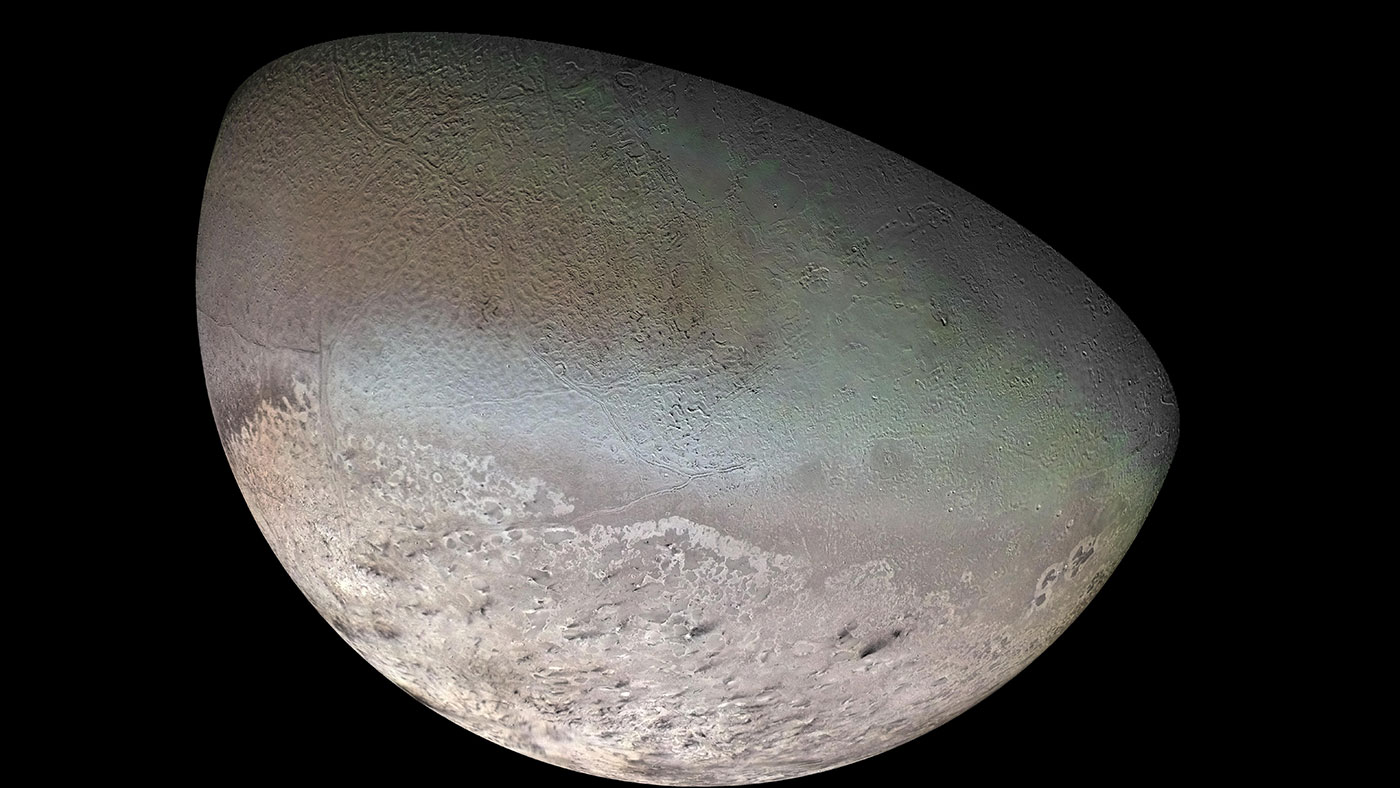 Triton as captured by a flyby of Voyager 2 (Image Credit: NASA)

3. Scattered Disc, Oort Cloud, and Comet Theory: Beyond the Kuiper Belt is a region called the Scattered Disc extending to 100 A. U. from the Sun. Much farther, still is the theoretical Oort cloud– a spherical region of thousands of A.U. from the sun.

Hence, starting with the Kuiper belt and moving outwards, all of these regions contain Trans-Neptunian objects- which means anything beyond the orbit of Neptune. And, it is believed that from all these regions, comets come from.

Objects orbiting as far as Kuiper Belt to Oort Cloud can have their orbits perturb by the gravitational influence of gas giants (Jupiter, Saturn, and Uranus) or even by other stars in the Milky-way Galaxy. They are then sent towards the sun in highly elliptical orbits as Comets. 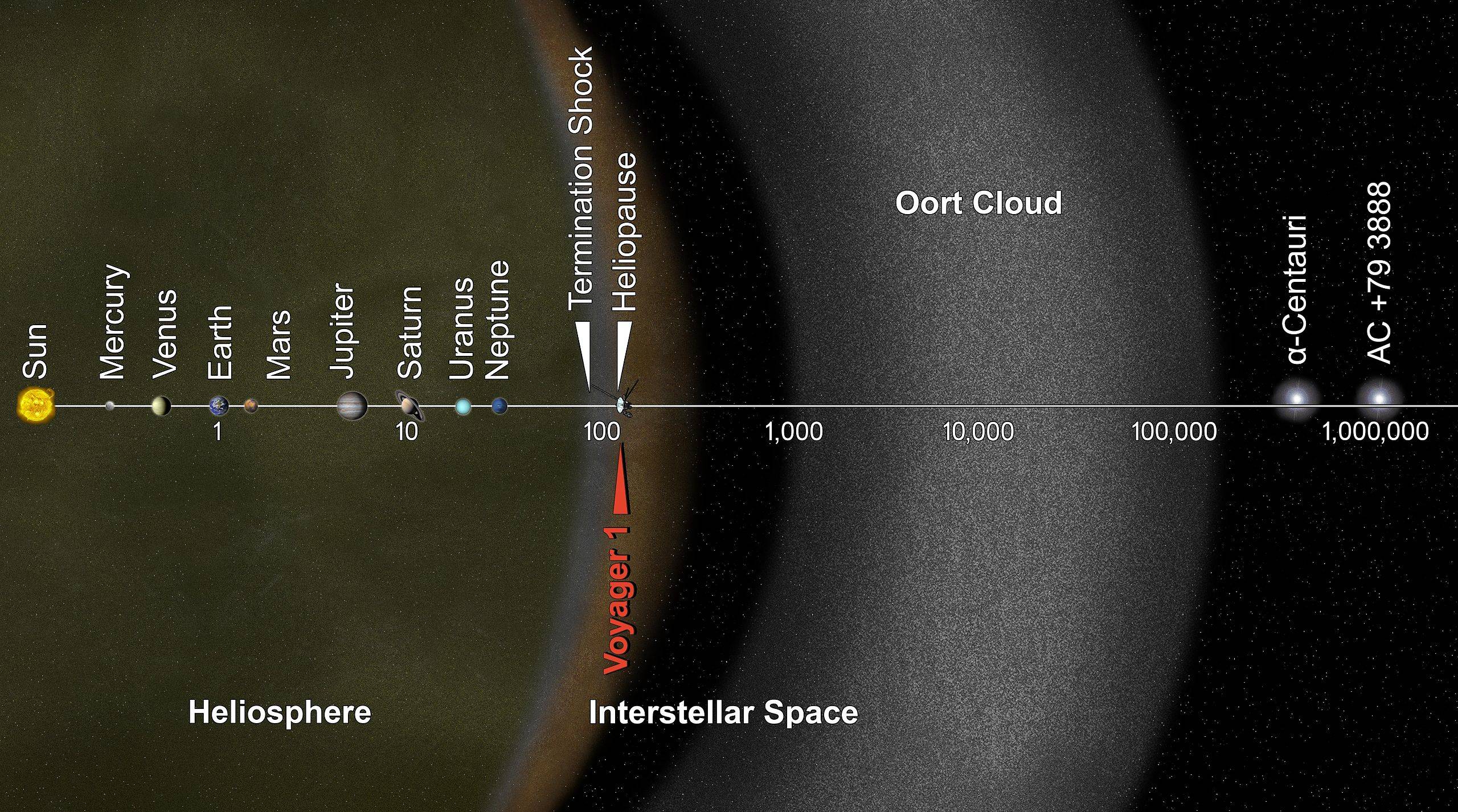 4. Some KBOs are very rocky, some have lots of metals, and some have both. So why didn’t these rocks gather to form the planet as they did for the other planets? The explanation lies with the immense size of Jupiter.

Its strong gravitational pull must have constantly disrupted the process of accretion within a certain distance, making it impossible for Asteroids in Kuiper Belt to accumulate sufficiently.

5. It is believed that the Kuiper Belt is slowly eroding itself away because objects that remain there occasionally collide, producing even smaller objects, comets, and dust.

It’s not all laser shows and space parties with Kuiper Belt objects. Now, straight away, why are we acknowledging the Kuiper belt? The answer lies in the fact that these objects are quite valuable for studying the earlier solar system (Carl Sagan’s last question) because they are believed to be the remnants from that time.

Analyzing the radioactivity of these objects is one way we can determine the age of the solar system. We have found amino acids inside Kuiper belt objects which means basic building blocks for life might have come from space, which is the basis for the panspermia hypothesis.

In the end, all I want to say is when we talk about the Solar System, it is inaccurate to imagine the standard image of it in our mind’s eye where there is the Sun and the eight planets orbiting it.

In reality and more accurately, the size of our solar system is far greater than we can picture. The number of celestial bodies within its boundaries is staggering, and the further we explore from Earth, the hard it is to find about the properties of objects we encounter.