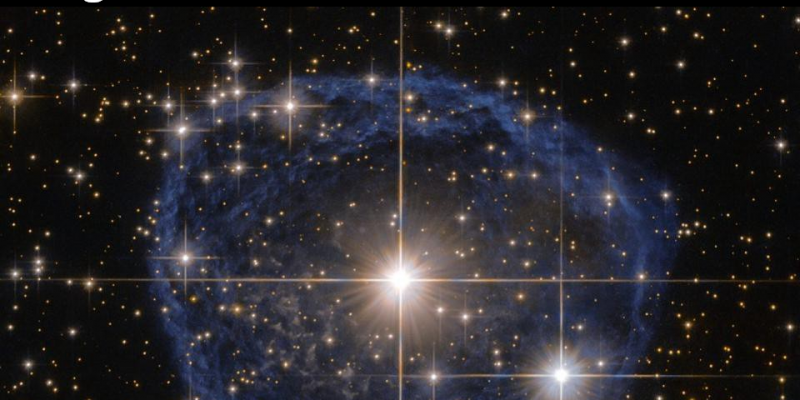 One of the space riddles: If the age of the universe is 13.8 billion years, how can a star be more than 14 billion years old?

Astronomers have been observing an alien star for more than a hundred years, which is 190 light-years from Earth in the constellation Libra. This star wanders the sky at a speed of 1.3 million km per hour, and the star is one of the oldest known stars in the universe.

In 2000, scientists determined to determine its age accurately via the European Space Agency’s (ESA) Hipparchus satellite, which estimated the star’s age at 16 billion years, and this number is surprising and confusing.

“The age of the universe, which is determined by observing the cosmic microwave background, is 13.8 billion years,” said Howard Bond of Pennsylvania State University. So compared to the age of the star, this is a real paradox.

The age of the star posed a big problem, so how could a star be older than the universe in which it was found? Conversely, how could the universe be younger than its stars?

It was evident that the old macros were old. Because it is a trace mineral, its predominant composition consists of hydrogen, helium, and very little iron. Its composition indicates that it existed before iron existed in the universe, but the fact that it is two billion years older than the universe that it holds makes it a fantasy.

Astronomers discover a record-breaking star close to the age of the universe.

A new star was recently discovered in the Milky Way galaxy, 35 thousand light-years away from Earth, a red giant star named (SMSS J160540.18–144323.1), which has lower levels of iron than any other star in the galaxy, means that it is one of the oldest stars in the universe, as it mostly belongs to the second generation of stars that formed after the universe’s inception 13.8 billion years ago.

“This star is incredibly iron-poor,” said astronomer Thomas Nordlander of the Australian National University. It was formed a few hundred million years ago after the Big Bang and has iron levels equivalent to a part of 1.5 million parts compared to the levels of iron in the sun, and this is equivalent to one drop of water compared to an Olympic pool.

In this way, we can verify the age of the star, because the bodies at the beginning of the universe’s emergence did not contain metals. The first stars were formed from the elementary gases, hydrogen, and helium, and they were huge hot, very short-lived, known stars (third group), and were never observed.

When these stars end their lives in spectacular supernova explosions, these elements disperse into cosmic space. When new stars form, the elements are trapped in them, so the amount of minerals the star contains is a reliable indicator of its age. For example, we know that the Sun is about 100 generations old since the Big Bang, but we have found other stars in our galaxy that have lower proportions of minerals, indicating that they are old.

One of these bodies, which holds the previous record for possessing the lowest percentage of iron, is the star (2MASS J18082002-5104378 B), equivalent to a fraction of 11,750 parts compared to the amount of minerals in the sun.

It is unlikely that any of the stars of the third group will live long enough to study them, but we can know their history from the stars that arose after that.

Researchers believe that the star that provided iron (SMSS J160540.18-144323.1) had a relatively low mass compared to the early universe, only about 10 times the mass of the sun, and this is huge enough to produce a neutron star. The team believes that this occurred after a relatively weak supernova)).

A supernova explosion could trigger rapid neutron capture, a series of nuclear reactions in which atomic nuclei collide with neutrons to form elements heavier than iron.

No evidence of the presence of these elements was observed in the star’s formation, which may mean that these elements were previously captured by the newly dead neutron star, but the amount of iron produced was sufficient to form the star (SMSS J160540.18-144323.1).

This star was probably one of the first members of the second generation of stars after the big bang and is now a dying red giant star as it is currently consuming its last remaining hydrogen before moving to the fusion stage of helium.

Scientists believe that studying this star from close proximity may reveal more information about the group of third group stars, which tells us about the rich cosmic history that these stars may narrate if these studies are realized.

A deeper look at the age of a star is lost

Bond and his team took it upon themselves to explain whether the estimated age of the star (16 billion years) was correct.

The team studied 11 observations of the star between 2003-2011 using the most accurate sensors carried by the Hubble telescope as these sensors can determine the location of the star, its distance, and the energy leaving it. “One of the things that are not certain about this star is its exact distance from us,” Bond says.

“It is important to take the correct distance to the star,” he added. Because that helps us determine its radiative strength and hence its age, so the higher the radiation strength, the younger the star.

We were looking for the difference between its apparent and real distance, which prompted us to look at the star with a time spacing of six months to assess the displacement in its position resulting from the orbital motion of the Earth, which tells us the true distance of the star.

He pointed out: “There is a lack of clarity related to the theoretical simulation of stars, such as the rate of nuclear reactions in the core of the star and the importance of the elements pushed down in the outer envelope of the star”.

The team worked on the idea that the remaining helium interferes deeply toward the center of the star, reducing the amount of hydrogen burned by nuclear fusion, and with the rapid consumption of interstellar fuel. The stellar age decreases.

Bond said: “Another important factor in the study is the amount of oxygen in the star being disrupted, as the ratio of oxygen to iron was higher than expected, and although oxygen was not available in the universe for millions of years This indicates that the age of the star is less than the initial estimates”.

Like all estimated measurements,” says Robert Matthew, a physicist at Aston University in the United Kingdom. It is subject to random and systematic errors in measurement, as the difference in the error ratio indicates that there is a possibility of intertwining in the calculations of the cosmic age, in another language that the age of the star that scientists agree with collides with the proposed age of the universe, and this conflict is eliminated by reducing the area of ​​error in the measurement to a minimum.

Additional improvements showed a decrease in the star’s lifespan, as a 2014 study showed that the star’s age is 14.27 billion years.

A deeper look at the age of the universe

Illustration of the Big Bang Theory, representing the age of the Universe (Image Credit: Astronomy is Awesome)

On the other hand, Matthew believes the problem has not been solved yet. Scientists at an international conference that includes the most senior physicists at the Kavli Institute for Theoretical Physics in California were puzzled by the results that suggested a different age for the universe, and they examined measurements of galaxies near our own, indicating that the universe is hundreds of millions of years smaller compared to what measurements of radio radiation in the background have found cosmic.

In fact, the age of the universe is only 13.8 billion years, according to the estimates presented in detailed measurements of cosmic radiation made by the European Planck Space Telescope in 2013, but it may reach 11.4 billion years old.

One of these studies is led by Nobel Prize-winning scientist Adam Rees at the Space Telescope Institute in Maryland, and the results were based on the idea of ​​the universe expanding.

Understanding the fact that there was a high concentration of heat that led to the explosion and expansion of the universe is essential. The theory suggests that the starting point should be measurable, but the new findings indicate that the rate of expansion is about 10% higher than the rate suggested by Planck.

He added, “This leads to a review of the accepted theories in this field, with a greater focus on dark matter and dark energy that may be behind this mystery.”

Suggested Reading: What’s at the end of the universe?