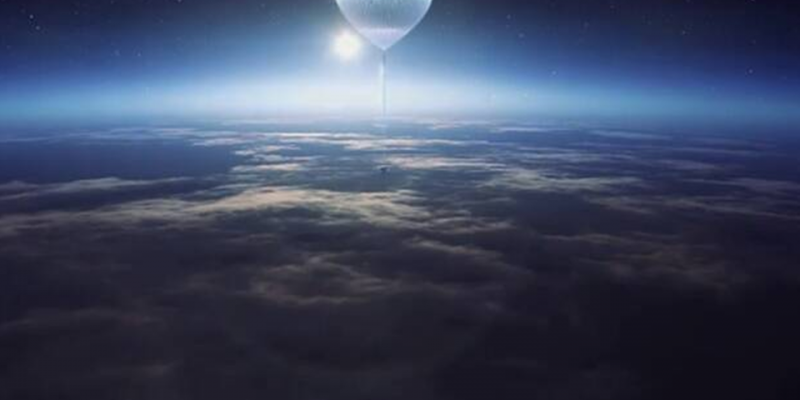 What does “the edge of space” mean to you? Before that, let me ask, what do you think when you hear the word “space”? Well let me tell you, space means emptiness. Total vacuum,  where there are no air particles that we know of our planet.

This is a typical question and I know it must be in your mind as well. Space is huge, it is expanding continuously but what causes this expansion is still unknown.

You know nothing can travel faster than the speed of light, but wait. What about the monstrous black hole at the centre of every galaxy we observe. Its gravitational force is so strong that light loses battle with it and eventually cordons off!

We live on planet Earth and it is vast compared to the human population. There are still many mysteries that we are unaware of and there is plenty of scope for research as well. Like we know, Earth is the only planet we know which harbours life. It comes under the Godlilock zone and thus we are safe from the harsh radiation of space.

Our species countered the challenge and developed our own way to develop ourselves. If we choose the astronomical perspective, then we are very small on this vast cosmic scale. We live in a galaxy that is itself one among the 200 million galaxies, each contains billions to trillions of stars which is itself is a huge number.

What can Telescopes do for us?

Let’s take an example of an average human who can still peer into the cosmos but only to some extent. With the advancement of technology, we could use telescopes to view celestial objects and even place telescopes in space.

Hubble for example has completely revolutionized our understanding of the cosmos. The most famous catalogue of Hubble is the “Hubble space Field” which showcases the galaxies which are extremely far from our eyesight still they could be observed through Hubble’s primary mirror.

It is impossible to detect these galaxies with our eyes so we require these time machines to peer into the past. Our thrust for exploration doesn’t stop here! Soon NASA and ESA are going to launch their most awaited James Webb Space Telescope which we are rigorously waiting for.

For understanding the edge of space, first of all, we need to know the importance of the Karman Line and its parameters.

For understanding the Karman line first up, let me explain to you the composition of Earth’s Atmosphere and its Composition.

It is the lowest layer of our atmosphere. From ground level, it peaks till 6.3 miles which are 10.13 in Kilometers. As a fun fact we all are being considered in this layer and also all-weather changes happen in this layer. Clouds also form here. As you go upwards, air pressure drops, and temperatures become colder and colder.

The next layer after Troposphere is Stratosphere. It extends from the top of the Troposphere and extends to 50km above the ground. Most importantly, the Ozone layer is found in this layer which absorbs high-energy Ultraviolet rays coming from the sun, thus there is a conversion of UV energy into heat. Thus from our point of view, it is an important layer.

Above the Stratosphere lies the Mesosphere which extends upward to a height of 85 km from the ground level. As a fact, most of the Meteors burn up in the Mesosphere. As you go upwards, temperatures are found to lower the Mercury reading reaching up to -90C. The air is far too thin to breathe easily and air pressure continues to drop.

Above the Mesosphere lies Thermosphere. High energy X rays and UV radiation from the Sun are absorbed in the thermosphere. As its name suggests, therma means heat. As most of the high energy waves are being trapped in the Thermosphere, its temperature continues to rise. Because the air is very thin we don’t feel the rise in temperature as such. It is more like outer space than a part of our atmosphere. Many satellites orbit within this layer.

Obviously, at this point in time, the air becomes very very thin giving us the sensation of a space-like environment. The air is constant throughout this layer leaking Earth’s atmosphere into outer space. It is considered the final frontier of Earth’s gaseous envelope.

Actually from its name suggests this may or may not be considered as a layer. It is a region in parts of Mesosphere and Thermosphere, where due to Sun’s high energy radiation knocks off electrons from their parent atoms and molecules. The electrically charged atoms and molecules that are formed in this way are called ions giving the ionosphere its name.

Let’s Discuss what Karman Line is.

International agreements describe “space” as free for everyone to explore but the same does not apply to sovereign airspace over states. The regulations of air space and outside differ. It’s acceptable to fly a 55-mile high satellite over China if space starts 50 miles above sea level but defines the limit at 60 miles, and you may find your satellite considered as an act of military action.

Most scientists argue that space begins at a point in which dynamic orbital forces become more significant than aerodynamic forces or when the atmosphere alone is not sufficient for a suborbital flying ship.

The Karman Line or Von Karman line is defined as a boundary between Earth’s atmosphere and outer space. It is defined as the height above 100kms above the Earth’s mean sea level. It was defined way back in the 1960s by Federation Aeronatique Internationale (FAI), an international record-keeping body for aeronautics.

This Karman line is named after Theodore Von Karman who was a Hungarian engineer and physicist for his groundbreaking work in aeronautics and astronautics. It is very difficult to pinpoint as to what exactly is the line and from where does it start…It’s a common question you must be wondering.

The Federal Aviation Administration, the US AirForce, and NASA generally use 50 miles i.e to be precise 80kms as the boundary. “This is the point at which atmospheric drag becomes almost noticeable”, Bhavya Lal and Emily Nightingale wrote in a 2014 review article.

As mentioned above, one may need to go 600 miles or more to the furthest level of the atmosphere by exiting the atmosphere altogether if the edge of space is defined in the tightest sense. The atmosphere is very little here and begins to make way for the stronger, more powerful solar winds.

A simple node to the sky may have been enough, but the final boundary appears to be more accessible every year. Outside space can be more close than ever believed in today’s world of possible commercial space flights, Mars expeditions and unfathomable technology developments.

Space academics like Francis Lyall and Paul B. Larsen feel that “any astronaut definition in legal terms would seem to require two parts, one training element and one altitude factor.”

G.S. Sachdeva defines astronauts as a person so trained and trained in a duty to carry out the mission of that particular spacecraft onboard a spacecraft during or after the space station or on the Moon or celestial body, in line with the principles and the activities connected to exploring and using outer space.

Some analysts have taken the Outer Space Treaty’s usage of the words ‘astronaut’ as ‘envoys of the human race’ to restrict the obligation to rescue to the (1)pilot and crew, or (2) pilot, crew and any professional serving on board.

With the fresh and exciting development of the commercial space sector, the present space-legislation regime, formed at the start of the space age, is beginning to expand, as only governments have a presence in space and the private usage of space has become a faraway dream. With the evolution of space tourism, the absence of a precise definition of the astronaut became a controversial subject.

The main questions in this regard are whether the rescue and return duties apply if the spacecraft in need is a private commercial vehicle and whether tourists are considered “astronauts” or “personnel” under the Treaties – which would allow state governments to count on assistance in the event of an accident.

In the realistic situation, for ‘astronauts’ and ‘space tourists,’ a distinct definition for the edge of space should be supplied. That is because it would take a lot of financial expenditure to rescue and return the human being in an aircraft (in distress).

Most nations do not want to spend the rescue of space travellers who are multimillionaires in most cases without compensation.

Suggested Reading: Is there a boundary to the universe?

We hope you’ve got the answer to can we reach the Edge of Space. Let us know in the comments.