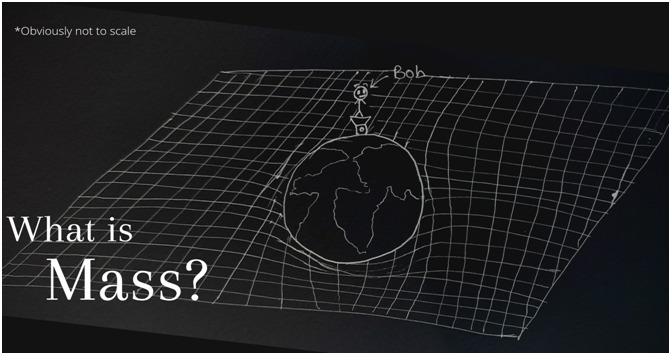 So your weight-conscious friend says that they’re gaining a lot of weight which in turn triggers the physicist in you and you jump in and say “just so you know, it’s mass, you’ve gained a lot of mass, gaining weight is scientifically incorrect in your context” and they hit you with an annoyed look and they never speak to you again. Yes, happened to me too. Why else do you think I’d be here, using physics to make friends.

Anyway, my point is when you say the phrase, “it is MASS”, do you realise the amount of mass the word ‘MASS’ contains? Maybe after this read, you will.

For the record, the weight of an object is actually the equal and opposite force you’re experiencing due to gravity.

However, the mass of the Earth is gigantic as compared to an apple hence its acceleration is negligible and the apple accelerates at 9.8 m/s.square towards the earth which we call ‘falling’. Between the Apple, Us, the Empire State Building, and Mt. Everest, the change in the force towards the Earth are very different.

They are exerting different forces on Earth (and so is earth on them) but their masses resist acceleration (this property is generally known as Inertia) due to this greater force, just as much that it provides a universality to the value of 9.8 m/s.square and is known as the ‘acceleration due to gravity.’

To simplify, when the Apple and the planet Mars are separated from the Earth’s surface by 3 meters (for example), both of them will move towards the earth’s surface with 9.8 m/s.square acceleration. Mind you in the latter case the force will be enough to have accelerated the earth to a significant value and you will see the earth moving in this case, so the Apple will ‘fall’ on earth and mars will ‘collide’ with the Earth.

Till now, we have established that one of the main properties of mass is inertia i.e. resistance to acceleration. Allow me to bifurcate ‘mass’ first. There are Inertial, Gravitational, Rest, and Relativistic masses.

I have highlighted the bottom two for a reason, hold on. To understand what each term means, we have to do some damage control. First of all, let’s completely forget the most well-known definition of mass, ‘Mass is the amount of matter contained in an object.’ Forgotten? Good.

Okay so beginning with the fact that the speed of light is the ultimate universal speed limit, anything with mass cannot reach or go faster than this speed, and anything massless has to move through space at this speed (i.e. 299,792,458 m/s). Why though? Why does an object with mass, say ‘Bob’, cannot go at this speed? 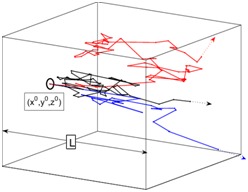 Imagine having a massless box (not possible but still, imagine it) with mirrored walls and a bunch of photons, which also have 0 mass, moving inside it in random directions with the speed of light, bouncing off of the walls of the box. When weighed separately, the scale shows no reading.

Now, give that box a little nudge to the right. During that split second of the nudge, the box accelerates meaning the photons moving into the direction of acceleration i.e. right will take a little more time to hit that wall and the photons moving opposite to that direction i.e. left will reach the wall sooner, creating an imbalance in the of the force exerted on the walls, in the favour of the back wall.

Consequently, the back wall feels greater force due to more of the photons hitting it per second, wanting to slow the box or to put it in a better way, to stop it from accelerating continuously till the speed of light, once the nudge is released.

So if a completely massless system somehow shows this property of resisting acceleration, do we call it ‘Massive’? Yes, you can.

In fact, that is mass, the box measured during acceleration will show a reading on the weighing scale (forgive me for using the term weighing scale, just consider it as an instrument that can measure mass). We have now arrived at our definition of Inertial mass, it is the degree to which an object resists change in its velocity.

More mass simply means more resistance to its acceleration. If you’re interested, you can actually take this thought experiment to derive Einstein’s famous equation as the mass of the proposed ensemble is just the energy of the photons divided by the speed of light’s squared.

This difference, though negligible, is very real. And we can see that on every level where mass pops up. The mass of each atom is less than the combined individual masses of protons and neutrons that make up the atom, again because of the interaction with the strong nuclear force which binds them in a stable configuration which leads to lowering its potential energy.

Talk about the mass of each proton/neutron? They’re made up of electron-sized particles called quarks (each proton/neutron) contains three of them) and most of the proton’s mass comes from the quarks jiggling at almost light’s speed inside the proton’s boundary just like the photon box example we made earlier.

But even these quarks can’t attain this value, 299,792,458 m/s. What is this ‘thing’ that’s resisting a quark which is a fundamental particle to not reach this speed? The Higgs field. 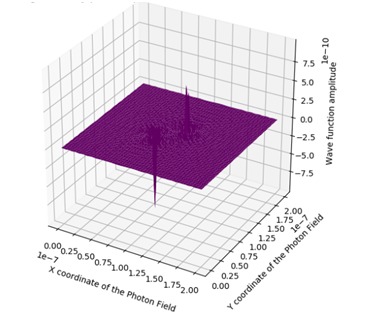 Self-simulated by Author (on python) figure of photon field (QFT)

I know this is all in Quantum Field Theory (QFT) but hear me out, my point of bringing this up is not at all high-techy nor math-intensive, but a rather interesting fact. This Higgs field interacts with fermions (sub-atomic particles known to have mass) which prevents it from reaching light’s speed, remove this blanket of Higgs field and these fermions do travel at the speed of light.

Imagine this as a viscous (not to be taken literally) aura that surrounds the universe through which only fermions can interact giving them the property of mass and lets them experience the flow of time. Well, that’s a topic for next week.

While discussing everything so far, we have nowhere mentioned the gravitational part of it. Now that we are space nerds, we can upgrade our selection of words. One of the other very well known properties of mass is that it responds to gravity.

The reason why in Newtonian mechanics we address inertial and gravitation mass as different bifurcations (one giving us the property of inertia and the other giving the property of gravity) is because until Einstein we didn’t know about the Equivalence principle.

The Equivalence principle states that Bob feeling the gravitational acceleration due to the Earth (experiencing wight on earth) is no different from the photon box being accelerated upwards, at 1 G in free space.

So the ‘weight’ felt of a massive object on earth is just them resisting the acceleration so Newton’s gravitational mass and Inertial mass are non-the-less the same thing. But gravity is not only about objects feeling the weight of each other but also creating their individual gravitational fields and bending light and stuff.

Einstein’s general theory of relativity tells us that mass and energy (since now we know mass is just confined energy) actually bend the space-time fabric and light following the geodesic along that curved space-time is what we call ‘warping’ space-time and in general terms, the bending of light that we observe.

We will go through both Special and General Relativity in articles for upcoming weeks. But here’s a peak in it. Special theory relativity defines something known as ‘Rest mass’ and ‘Relativistic mass’.

Roughly describing, if two identical bodies are kept in free space, where there is no other object to be assumed as a reference, the two objects act as references for each other, which is not that hard to see if you visualise it correctly.

So Special Relativity says that what Bob measures as his mass will be the ‘Rest mass’ and what Bob sees as his twin’s mass will be his ‘relativistic mass’. It also claims that relativistic mass will increase as their relative velocity increases meaning that as Bob sees his twin going at faster and faster speeds he will also see the reading on his scale to be increasing. And since his twin sees Bob going faster and faster, he will record his mass to be increasing.

Both will record each other’s mass to be increasing when their rest mass seems to be constant.

Why is the last sentence true? To answer this question, you will have to have understood this article correctly.

Post what you think is the answer to this in the comments. (hint: The terms ‘rest’ and ‘relativistic mass’ are just tools used for comparison and are not properties as ‘Inertial’ mass is). A correct answer will be a win for me and a wrong answer will be further beneficial as it’ll guide the way to explain the answer in the next article.

Suggesting Reading: Can we ever reach the Edge of Space?

Can we ever reach the Edge of Space?