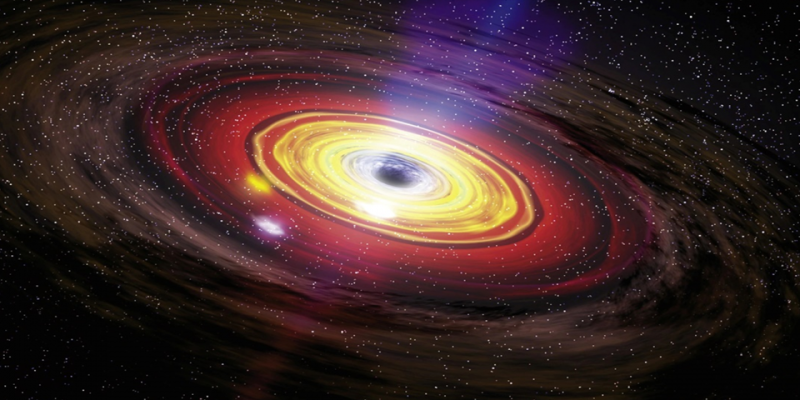 Talking about a black hole, I am reminded of a quote by a great cosmologist Stephen Hawking he says, “Consideration of particle emission from black holes would seem to suggest that God not only plays dice but also sometimes throws them where they cannot be seen.”

Before going near a Black Hole, first of all, we need to understand the lifecycle of a star. A Black Hole is formed depending on how massive a star is, and the formation of stars depends on the cloud of dust and gas.

They are formed from the accumulation of gas and dust, ultimately collapse because gravity creates intense heat and pressure to ignite thermonuclear fusion. Mostly these clouds are made up of gas of Hydrogen and Helium in a stellar nursery where stars formation activity takes place. This process takes millions of years sometimes in a family of stars. Usually, stars are formed in clusters.

Not all stars are of equal size although their composition is very much similar to the conversion of Hydrogen into Helium which we refer it as thermonuclear fusion. For different kinds of stars, it depends on their mass as how they burn out their fuel. Most stars are classified according to their spectral classification. Most stars are classified as  O, B, A, F, G, K, and M. M being the hottest one while O being the coolest one.

For a star to become a Black Hole, first it has to go undergo many complex processes. When a star is formed, there is a controlled thermonuclear reaction going on in its core. The reason behind this reaction is the collision of hydrogen atoms and in the process, it increases the temperature which eventually coalesces to form Helium.

The heat released is what we can say is like a controlled hydrogen bomb explosion. This additional heat also increases the pressure of the gas which balances the gravitational contraction of a star and thus we say that a star is in an equilibrium state.

But before time everyone has to bow down! As it said nothing is constant and so is the case with the stars. Some of the other times they have to die, but their fate after their death depends on how massive the star is! More massive stars burn out their fuel quickly than low mass stars.

This is because the more massive the star is, the hotter it needs to be to balance its gravitational attraction. And the hotter it is, the more quickly it will burn its fuel. Our sun can last 5 billion years from now depending on its mass.

But what happens when a star collapses onto its own gravity? What happens next? These might be some questions which are going through your mind but don’t worry just stay with me. Before proceeding further first of all we have to understand the Chandrashekhar limit.

This theory was proposed by Indian Astrophysicist Subramanium Chandrashekhar. It states that a star which is 1.4 solar masses remain in the state of a white dwarf until some remarkable happens and that star exceeds this limit turns into a neutron star or a black hole depending upon the solar mass of a star.

Once the black hole is formed, What next? So there are primarily three types of black holes which astronomers have found. But still, the hunt is on!

1) Stellar Mass Black holes: It forms when a massive star runs out of fuel, eventually collapsing onto itself. If the star is between 18 to 20 times the solar mass then explodes into a supernova explosion.

But if the mass is even greater than 20 solar masses then it forms a black hole. Its core is not matured enough to stop gravity from overtaking it. Gravity wins here and a stellar-mass black hole is formed.

2) Intermediate type black holes: As its name suggests they are intermediate in size that falls in between stellar-mass black holes and supermassive black holes. You can even compare it with our earth as our earth falls in the goldilocks zone where the temperature is neither too hot nor too cold. We can relate with an example that our body is made up of cells that makes tissue and so on. Such is the case with intermediate black holes, they are created when many stellar-mass black holes combine which in the process galaxies merge or collide. They are estimated to have a mass between the range of 100 and 1000 solar masses.

3) Supermassive Black Holes: They are huge! They are enormous, they are massive! Their mass ranges in millions of solar mass which mean they are formed from the collapse of a very massive star under its own gravity. But still, Astronomers are not sure about this idea. It is said that there is a supermassive Black hole at the centre of every galaxy. Structure of a Black Hole:

A Black Hole, the place where the light loses its battle with gravity. We know that gravity is the weakest force and yet it has far-reaching footprints that even light falls prey to it. As you can see in the above figure, we have an event horizon where light can’t cross it.

The event horizon is the region of a black hole that is equal to the escape velocity of light. It’s the point of no return, although it is not a physical surface but a sphere in itself surrounding a black hole. This term was coined by Wolfang Rindler.

Crossing the event horizon is such that you need to travel at a speed greater than light. As we know that nothing can travel than the speed of light so crossing it would highly be impossible. But when the matter comes closer to it, it will be torn apart into its smallest components i.e into its atomic parts, and eventually, be squeezed into a singularity.

Ex: If a man tries entering a black hole, his feet would feel the effect of strong gravity and eventually be torn apart and then his upper part.

Talking about Singularity, it is the ultimate monster where anything comes into it, it just doesn’t let him live! Everything is squeezed like nothing. It has a mass that is enormous in a small area where the gravitational force is very very strong. Density and gravity become infinite, thus the laws of physics cease to exist. It’s huge!

Remember one thing, nothing is permanent whatever you see around. There is an end to everything around. Our generation and our planet are destined to end someday and the same goes with our sun.

It will burn brightly for 4.5 billion years and after that, it will end its life. The same goes with black holes. Before understanding the death of a black hole,  we first need to understand Hawking radiation.

It describes speculative particles are formed by a black hole’s boundary. This simply means that black holes have a mass that is inversely related to their temperature i.e when the temperature of a black hole increases then its mass must be less.

Although it is not directly observed, it is a prediction that was put forth by the Late cosmologist Sir Stephen Hawking. This prediction is based on the theory that is based on quantum mechanics and general relativity.

We all know that whatever enters the black hole, is completely locked inside it thus blocking its view from the rest of the universe. In simple words, Hawking radiation is Black Body radiation due to quantum fluctuations near the event horizon.

Now you must be wondering what is quantum fluctuations, in simple terms, it is explained as the temporary random change in energy at the quantum level.

Let’s take an example of a particle and antiparticle. We know very well that when particles and antiparticles meet they annihilate each other releasing radiation and energy. But these energy fluctuations, cause to create the pair of virtual particle-antiparticle pairs near the event horizon.

When one of the particles goes inside the other escapes before annihilating each other. The net result is that a particle is emitted from the black hole. And since the particle escaping the black hole’s influence has positive energy and which is absorbed has negative energy relative to the outside universe.

This results in black holes losing their energy and mass as well according to Einstein’s famous equation E=mc^2.

This is the most accepted theory by the scientific community but still, some people argue that information being lost stands odd against the theory that information can’t be created nor destroyed. But as science comes from practical implementation, only time will give us the answers.

I hope you enjoyed this article as much as I enjoyed presenting the content before you. Thank you and happy reading!