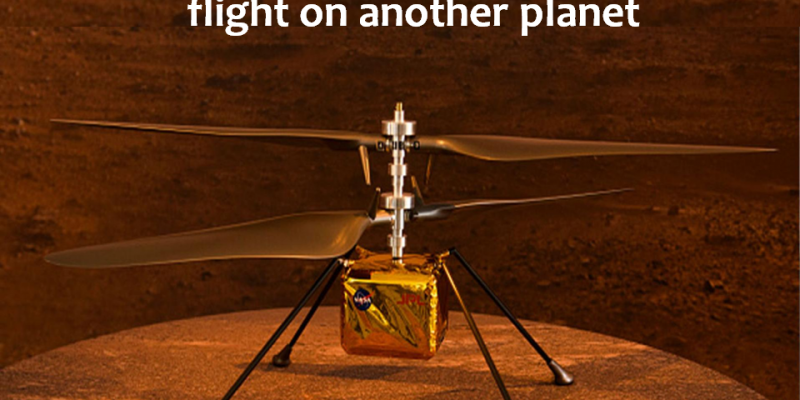 NASA has successfully launched a small drone on the surface of Mars on 19th April 2021. The drone, called Ingenuity Helicopter, flew in the air for less than a minute, and this is the first time NASA has succeeded in launching and flying a powered aircraft controlled by a crew from another planet. Confirmation of the mission’s success came via the satellite on Mars, which transmitted the helicopter’s data to Earth. And the US space agency promises more adventurous flights the next day. The plane will be required to fly higher and farther as engineers strive to test the limits of this technology.

The difficulty of the task

Flying on the red planet is not easy. The nature of the atmosphere on Mars is different, as it is very thin and density does not exceed 1 percent of the density on Earth. It does not give off much of the air needed to propel it.

But the force of gravity on the red planet is less, which is a helpful factor, yet engineers built the helicopter to be very light, weighing only 1.8 kg.

Above the fuselage are two 1.2-meter-long propellers that rotate in opposite directions, at speeds of up to 2,500 rpm. That’s superfast, about two-thirds of the speed of sound on Mars. It provided Ingenuity the power it needed to rise.

NASA monitored winds in the Jezero area, where the Perseverance lander landed. They expected the wind speed to reach 20 meters per second, faster than what had been tested on the ground, but the team believed that the helicopter was ready to perform the task.

Where did the flight take place?

The spacecraft is known as Perseverance or “Perseverance” has landed in an area of ​​the Red Planet called Jezero Crater. The robot carried a helicopter under it during its dangerous landing on Mars in February.

Then, the spacecraft traveled to a “helipad” about 20 meters from the place of its landing, and there, the Ingenuity helicopter landed on the surface of Mars.

Engineers say the helicopter was in good condition for its test flight. After the successful flight, NASA will try to make four more helicopter flights in the coming days, each flight taking the plane to a place a little further.

How does the plane send the pictures? Onboard the helicopter, there are two cameras, one in black and white aimed at the ground and used for navigation, and the other in color and high-resolution, with its lenses facing the horizon.

The vehicle will also move away to a distance of about 65 meters. The telephoto feature will be used in its cameras to obtain some close-up shots of the helicopter’s flight. And with some luck, we might get a video recording as well.

There are complications associated with all of this. Both the rover and the helicopter operate independently and carry separate hours. The timers must be synchronized for imaging to be possible.

Why is this mission so important?

The US space agency says, “the flight will be the Wright Brothers’ moment,” referring to the launch of the first controlled flight of a powered and controlled aircraft here on Earth in 1903.

To celebrate this historic moment, a piece of postage-stamp-sized tapestry from the wing of the Wright Brothers’ plane was affixed to the Ingenuity Helicopter before it left Earth. It is reported that the Wright brothers’ first journey took only 12 seconds. And great things always start with small steps. Hopefully, this will eventually change how we explore some distant worlds.

Drones could be used to search for future astronauts and even astronauts once they finally reach Mars. NASA has already agreed to send a helicopter to Titan, the big moon of Saturn. This moon has a very thick atmosphere. The vehicle, known as Dragonfly, will reach Titan in the mid-2030s.

A helicopter or a drone?

NASA has called the new vehicle a “helicopter” and not a “drone” (unmanned aircraft), even though it is operating without a pilot. It will fly approximately 55 million kilometers from Earth, which is too far away to transmit remote control signals.

“The plane will be a few light minutes away, so there will be no way to control the mission in real-time,” Mimi Ong, director of the Mars Helicopter Project at NASA’s Missile Laboratory, said in a statement.

The team at the NASA Missile Laboratory was keen to create a helicopter as robust as possible so that it could stay for as long as possible and not crash on the surface of the Red Planet.

“The registered altitude of any helicopter flying here on Earth is about 12,200 meters. The Martian atmosphere is only one percent of the Earth’s atmosphere, so when our helicopter is on the surface of Mars, it is already 30,480 meters on the ground,” Ong added.

The US agency said in a statement: “If this helicopter does not succeed, then the 2020 mission will become without effect. But if it succeeds, helicopters will have a real future as low-flying means and aerial vehicles that can reach unreachable locations” by moving on the surface of the planet.

NASA currently relies on vehicles to explore the Red Planet, and because it works on wheels, it faces many obstacles while walking on the surface and cannot cover a large area.

An example of this was what happened to a 2010 product, and it got stuck until it used up all the power and stopped working well.

On Uranus, for the first time, X-Rays were detected