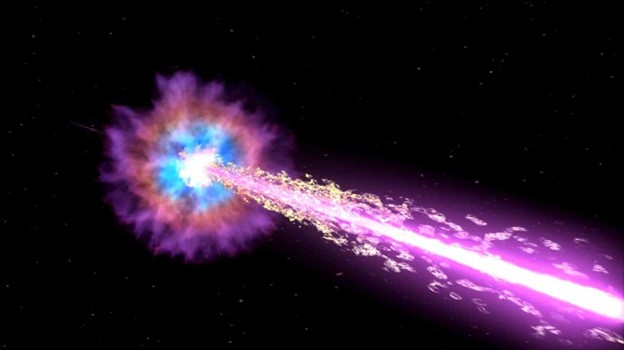 Although our understanding of the universe has improved over time, many fundamental issues still stand in the way of our journey towards understanding the physics of the world around us. One such limitation is our ability to measure distances, especially with regard to light coming from far away at random.

Recently, a team of researchers detected one of these flashes of gamma rays coming from a distance of 13.4 billion light-years. In the research undertaken by two teams of astronomers, the light was detected from the surface of the remnants of a space rocket orbiting the Earth.

In the first study, conducted by a team led by astronomer Charles Steinhardt of the University of Copenhagen in Denmark, it was found that light originates within the solar system. The second study was conducted by a team led by astronomer Michal Michalowski from Adam Mitskevich University in Poland. The source was carefully monitored, as it turned out to be reflected light from space debris belonging to the Russian Proton rocket.

The original study that spotted the light source, conducted by a team led by astronomer Linua Jiang of the Kavli Institute of Astrophysics in China, predicted that the light source was much further away.

Michalowski commented on this discrepancy: “Our inability to measure distances is a fundamental problem.”

“If an object of a certain brightness, it may be a nearby object of dim brightness, or a distant object very bright, in both cases, the object will appear with the same brightness for us, so there are multiple hypotheses in this case.”

“The object in question turned out to be a very close piece of space junk, but its brightness was equally consistent with a massive starburst at the edge of the visible universe.”

The light of GN-z11 was spotted in April 2017, when Jiang’s team was observing a distant galaxy called GN-z11 using the Keck Observatory in Hawaii. The data collected by the team showed the detection of a short-lived flash of light, lasting less than 245 seconds, coinciding with the existence of the galaxy.

Many researchers were not convinced by this hypothesis, as the gamma rays emitted in the early universe were very few, and GN-z11 is one of the ancient galaxies. A short study such as the one conducted by the team will not be enough to monitor these rays, as the observation lasted only 5 hours.

“That the observed light was a gamma-ray burst in the early universe is a very low probability, and correlates with the exclusion of many plausible alternatives,” Steinhardt said.

“Many similar signals have been observed, and their interpretation of the presence of light sources – natural or artificial – within the solar system is the closest to the truth.”

Michalvosky’s team identified the object that reflects these rays. They studied space debris and found a piece of a Russian Proton rocket launched in 2015. The orbit of this rocket is 13,758 kilometers away. It is possible that it appeared in the field of view in conjunction with the detection of light.

Also, its presence at this altitude makes it far from the Earth’s shadow, which indicates the possibility of sunlight reflecting off it.

Jiang and his team dispute this hypothesis, as the data does not fit with NEOs. They said the calculations could point to another unknown object, but that possibility remains very limited.

“It is still possible that a satellite or space junk is present, although our data indicate that our first conclusion is likely,” the team said.

The simplest explanation may be correct as Occam’s old rule states, or, as Carl Sagan said, paranormal claims require paranormal evidence to prove them.

This means that correlating the observed light with a distant galaxy requires definitive evidence for this explanation to be convincing. This is what makes Mikalovsky even more convinced of his explanation of the phenomenon.

Mikalovsky concluded, “The detection of gamma rays from a distant galaxy is a great event, and it will change our understanding of the universe, so it is good that I can contribute to advancing science in the right direction, but on the other hand, it is frustrating that this phenomenon has such an explanation. The simple.”