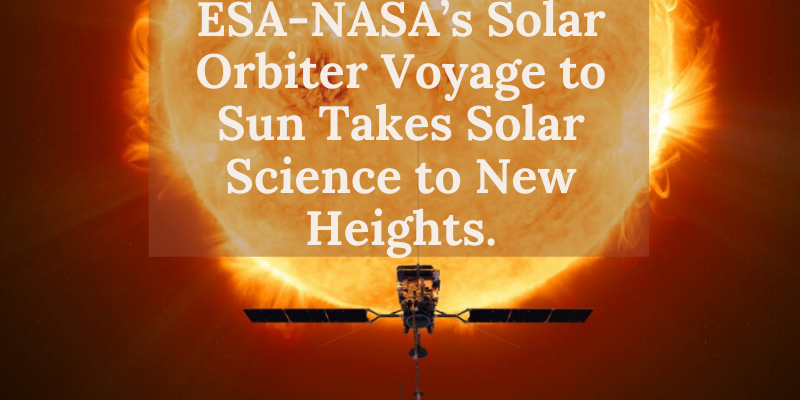 ESA and NASA have a mutual interest in exploring Sun environment, understanding the inner solar system environment more broadly and the fundamental plasma processes near the Sun. A new collaborative mission between ESA and NASA, the Solar Orbiter was launched on February 9, 2020, on a United Launch Alliance Atlas V rocket from Launch Complex 41 at Cape Canaveral Air Force Station in Florida, to study the sun.

The solar panels were successfully deployed on the next day of the launch and a signal from spacecraft was received by the mission controls at the European Space Cooperation Center in Germany.

After the first two days of the launch, Solar Orbiter had deployed its instrument boom and other antennas that communicates with Earth and gather scientific data. Solar Orbiter is a seven-year mission to study the environment which is surrounding the spacecraft and also observing the Sun.

The Solar Orbiter has been deployed in an elliptical plane to get the images of South pole and North pole. The trajectory includes 22 approaches to the Sun, to study the sun and its influence throughout the solar system. The trajectory path will cross Earth and Venus repeatedly and will get closer pictures of the poles in this path.

As humans, we have always been familiar with the importance of the Sun to life on Earth, observing it and investigating how it works in detail, but we have also long known it has the potential to disrupt everyday life should we be in the firing line of a powerful solar storm. By the end of our Solar Orbiter mission, we will know more about the hidden force responsible for the Sun’s changing behavior and its influence on our home planet than ever before.

Through this joint venture, the scientists will have better understanding on the space weather and environment, the conditions in space that impact astronauts and satellites and also the solar wind impact on the everyday technology like GPS and communication satellites.

During this mission, a commissioning phase of three months is introduced to check the working of the spacecraft’s 10 scientific instruments. This mission includes two main modes of study namely In-situ instruments and Remote- sensing instruments. The spacecraft’s in-situ instruments will collect scientific data about the environment around the spacecraft and measures the solar wind and solar magnetic field. The remote- sensing telescopes will focus on the calibration for science operations near the Sun. The remote-sensing instruments will image the Sun’s atmosphere – the corona and the solar disc. It also collects data that will help scientists understand the Sun’s inner workings.

To overcome the heat, Solar Orbiter is designed with titanium heat shield along with calcium phosphate coating that withstands temperatures over 900 degrees Fahrenheit. The Solar Orbiter will work closely with NASA’s Parker Solar Probe in a unique orbit. Parker Solar Probe touches the Sun at much closer distances than Solar Orbiter, to study the origins of solar wind, but does not have cameras to view the Sun directly. Solar Orbiter is at an ideal distance to achieve a comprehensive study of the Sun and it also carries cameras that will provide the first-ever images of the Sun’s poles. This duo will be useful for tracking the flows from the Sun. They can simultaneously image the structure of corona and the solar atmosphere.

Solar Orbiter is going to do amazing things. Combined with the other recently launched NASA missions to study the Sun, we are gaining unprecedented new knowledge about our star. Together with our European partners, we’re entering a new era of helio-physics that will transform the study of the Sun and help make astronauts safer as they travel on Artemis program missions to the Moon.

Thomas Zurbuchen, NASA’s associate administrator for Science at the agency’s headquarters in Washington.

Solar Orbiter is expected to give us the most advanced look of the Sun and its influence on the solar system.