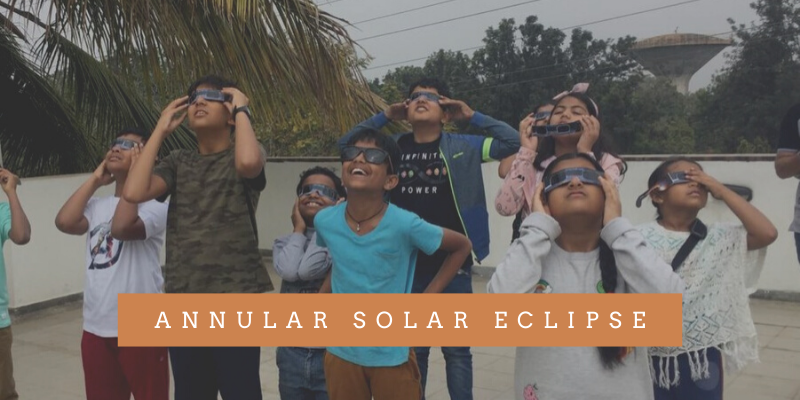 The only event that can turn a day into night (apart from earth’s rotation) is a solar eclipse. This Sunday we get to experience the mysterious feel of a total solar eclipse accompanied by the razzle-dazzle of the “ring of fire”. June 21. 2020 marks the annular solar eclipse that will be visible from northern India, southern Pakistan, China and parts of Africa. Mankind has been recording solar eclipses for over 5 millennia. But there have always been myths and superstitions surrounding them. The Chinese believed that it was a dragon devouring the sun; the Greeks believed it to be an indication from the gods of impending destruction and some Indians still believe that it can be harmful to the young and pregnant, and turns food harmful for consumption. What better way to clear the fog of doubt than knowing what actually causes eclipses?

At some point during your education, you might have come across the definition of an eclipse. To sum it up – An eclipse is an astronomical event where three celestial bodies are aligned in such a way that when one astronomical object passes between two other celestial bodies, it obstructs the source of light from the viewer ( in our case Earth) hence casting a shadow. The word eclipse was derived from the Greek word “ekelepsis” which means “fail to appear”. The three celestial bodies involved in eclipses visible from the earth are: of course Earth, the moon and the sun. Depending on whose light is getting obscured we experience lunar and solar eclipses. Since we have an upcoming solar eclipse why don’t we dive into what gives rise to them? Solar eclipses occur when the moon comes in between the sun and the earth and casts a shadow over us. The regions that are under the shadow experience an eclipse. But how does a moon whose diameter is approximately 400 times smaller than the mighty sun, block it out? It could be called a “cosmic coincidence” or just a game of distance and perspective. Even though the sun is much larger, it is 151.99 million kilometres (avg) away whereas the moon is just 384,400 kilometres (avg)  from Earth, the colossal difference in distances makes up for the size disparity of the two from earth’s perspective. When a new moon and only a new moon, during its course of orbiting comes in between the sun and our planet, casts a shadow. The shadow is made up of a darker central region called Umbra and a lighter outer region called Penumbra. The type of eclipse that would be visible is regulated by the regions of moon’s shadow, giving us three types of solar eclipses: total, partial and annular (and rarely a hybrid which starts as annular/total eclipse but its shape changes as the moon shadow moves away). A total solar eclipse, is a result of the umbral shadow being cast on the planet, blocking out the entirety of the sun for several hours in its entirety but not more than few minutes at one location. A Partial eclipse takes place when the penumbral region over us casting a partial shadow. These eclipses can be sighted between 2-5 times in a calendar year. Now, coming to the star of the weekend, an annular solar eclipse. What makes it so special?

Want to learn about Telescopes?

Learn all about telescopes in our online class “All about Telescopes“, starts on the 22nd of June, Check it out!

Even though the moon passes between the sun and earth every 6 months, for an annular eclipse to take place three things need to fall into place 1) the phase of the moon (new moon) 2) position of the moon (between earth and sun) and 3) size of the moon (big enough to cover the entire central portion but small enough to create the ring of light).

Due to the moon’s elliptical orbit around Earth, during perigee (position closest to us) it appears larger and during apogee (position farthest from us) its diameter appears smaller. So, when a new moon during apogee aligns in between the sun and earth it creates an antumbral* shadow leaving an annulus (ring) of sunlight leading to the spectacle of the annular solar eclipse.

*Antumbra is a region of shadow that lies beyond the umbra, this region exists when the source of light (sun) is larger than the object (Moon) casting the shadow.

Do s and Don’t s of solar eclipse viewing:

Want to learn about Telescopes?

Learn all about telescopes in our online class “All about Telescopes“, starts on the 22nd of June, Check it out!