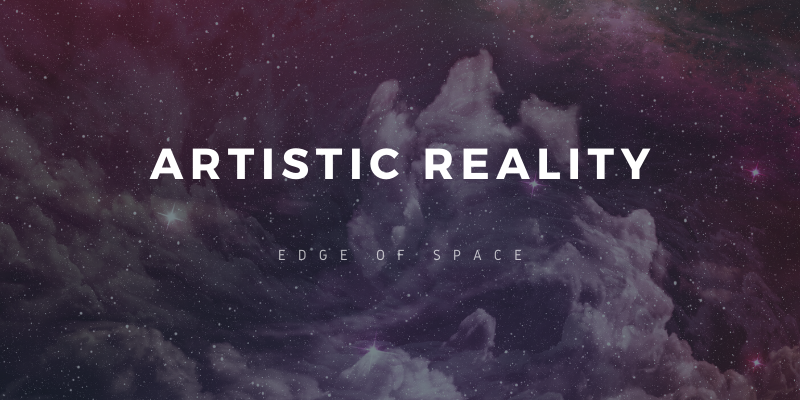 Blending the colorful world of Arts, which includes Art, Music, and Literature, with the technical world of Science, is the key to understanding the “Artistic Reality” of this Universe. And so, I invite all my fellow readers to join me along this article to perceive the Cosmos from an artistic point of view.

Hey, wait! Did you take a look at the picture above? It is a ferocious Royal Bengal Tiger hiding behind the greens ready to mark its paws on the prey. I took this picture to an exhibition and was only hoping my frame to be caught by the audience’s eyes when someone inquired, “A splendid shot of a tiger it is! I wonder what lens was it?” And that is when a voice came out of the crowd claiming, “Just a work of pencil colors, you know”—I spoke. Having heard that, every person standing in there went into a state of utter perplexing thinking—“Is Art Realistic or Reality Artistic?” And here is my answer to it.

Art is not a “real” one; it is an imaginary dimension where one glides through the caves of conceptual space that run across the Artist’s mind. You can move along the top, bottom, left, or right, it is like an entire Universe in itself. And that is the space where the vibrations of the thoughts of an Artist dwell, quite like the ones created by patting and sliding one’s fingers across the frets of an acoustic guitar. When the notes in a musical piece run in harmony, an effect of resonance forms a glorious tone—a tone that even resides inside the smallest of all particles; the quarks; an unusual number of matches and mismatches of such vibrations resonated to shape the Universe we see today. And that vibrancy is astounding.

Speaking of vibrancy, don’t you get mesmerized watching the waterfall from the paradise, the glamorous “HH-222 Waterfall Nebula”, one created with the divine and colorful stardust, the stardust that makes us all? Feeling the tender touch of the vibrant colors of the waterfall soothes my heart—so delicate as if it wants to speak something. But not in any language known to the little human world; it’s the language of the eternal Cosmos; the frequency. And that frequency reminds me of the beautiful Jingle Bells ringing on a Christmas night: a night lightened up with colorful stars, a night when every child’s dream comes true.

“I was dashing through the snowy paradise, in a one-horse open sleigh, but suddenly in the fog, everything faded away.” (Sing along with me in the tune of Jingle Bells!) The Universe as if lost the attribute of sound. Only was I worried that I realized; I had already entered the “Quiet Zone” (context adopted from the poem “Keeping Quiet” by Pablo Neruda)—a zone that rejects names and forms; interpretations and explanations—realizing an absence that comprises all presences. But, seemingly even in that strange quietness, I found that rhythmic frequency, which is prevalent in all literary works.

Inhaling that pleasant quietness, relaxing and meditating; it feels like flowing into the river of time picturing all events of one’s life in a sequence—a time machine sort of thing, it is. Traveling through time, I realized the mesmerizing beauty of this eternal Universe, and I hope so do you now. After all, “Reality is Artistic!”, and that is my imagination about the “Artistic Reality”—a reality amalgamating the colorful world of Arts, the beautiful melody of Music, the stories and rhyming poems of Literature, and the mystifying beauty of the Cosmos.

WHAT IF WE ARE ALIENS IN THIS PLANET?