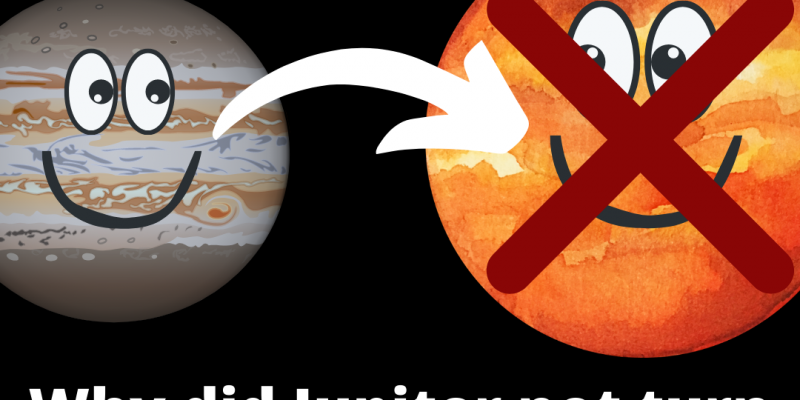 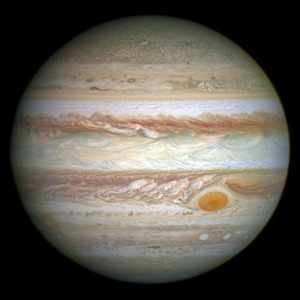 Jupiter is named after the King of the Gods. It is a huge planet, with a strong magnetic field, and more moons than the rest of the planets in the solar system. Although Jupiter was discovered and known long ago, the development of the telescope and other space study equipment contributed enormously to our knowledge of this gas giant. In short, there is an enormous amount of surprising information about Jupiter that most of us are not familiar with. Here we try to shed light on ten facts that will surprise you and increase your interest in the field of planets.

As for the most interesting fact, if the mass of Jupiter increases more than it is, its size will decrease. More mass means higher density. What causes the planet to shrink in on itself. Astronomers expect that the mass of Jupiter will double while its size remains the same.

Due to its size and mass as mentioned earlier, Jupiter moves at a high speed. In fact, it has a rotational speed of 7.45 meters per second or 45,000 kilometers per hour. It takes about 10 hours for the planet to complete a full revolution on its axis. Because it was spinning at such a rapid speed, its poles flattened slightly and swelled at the equator. The difference in the distance from the center of the planet to one of its poles and the distance from its center to its equator is estimated at 4,600 kilometers. This indicates the effect of its large size and rapid rotational movement on its external shape.

The Great Red Spot is called a phenomenon on its surface, and it refers to a storm that has been around for a long time. The great red point is located in the southern region of the equator. As for its dimensions, it is about 24,000 km in diameter and 14,000 km in height. To bring it closer to our minds, the great red dot widens to place two or three planets the same diameter as Earth. It is estimated to be about 350 years old, which is when it was first observed, in the 17th century.

It was first observed in 1665 by the Italian astronomer Giovanni Cassini. By the beginning of the twentieth century, scientists began to develop theories about whether or not it was a storm, and if it was formed due to the instability of the movement of the planet and the speed of movement of its atmosphere. These theories were confirmed during the Voyager 1 flight, which observed the Great Red Point closely in March 1979 as it passed near Jupiter.

It appears to have been in a contractionary phase since then, and based on Cassini’s observations, it was estimated at about 40,000 km in diameter in the seventeenth century, nearly twice its size now. Astronomers do not yet know whether it will disappear completely, but they are almost sure that another storm will form elsewhere on the planet.

The smallest stars in the Milky Way galaxy are known as (EPL MG 0555-57AP), and it is a red dwarf star and is about 600 light-years away from us, with a radius of 59 thousand km, which means that it is slightly larger than Saturn, which is smaller Hydrogen stars we know, as hydrogen mergers occur in their nuclei that keep them burning until their fuel runs out. In our solar system, Jupiter is larger than this small star, and Jupiter appears to its eyes as a large ball of ice cream with a radius of 69911 km. So, why did a planet of this size not turn into a star?

The simple and short answer: Jupiter’s meager mass does not support hydrogen fusion and conversion into helium as most stars do. As for the mentioned star, its mass is about 85 times greater than the mass of Jupiter, which makes its mass less than the mass of any known star in the universe, and if it was less, then hydrogen mergers would not have occurred within it. But what if our solar system was a little different? Could Jupiter have turned into a rival star to the Sun?

Similarities greater than we know between the sun and Jupiter:

This gas giant will not turn into a star in the conditions of the solar system, even though its mass is 2.5 of the mass of all the planets of the solar system combined, and due to its gaseous nature its density is low compared to the Earth, for example, it is about 1.33 grams per cubic centimeter in Jupiter, while it is about four times (5.51 grams per cubic centimeter) in the ground.

But when we compare it to the sun, we find interesting similarities, as they are similar in their internal structure, and the density of the sun is equal to 1.41 grams per cubic centimeter. With regard to mass, hydrogen constitutes 71% of the mass of the sun, helium 27%, and some other elements make up the remainder and in Jupiter, hydrogen constitutes 73% of the mass of the planet, and helium 24%. For these reasons, it may sometimes be said that Jupiter is a failed star.

Stars and planets are born with two different mechanisms. So, stars usually arise when an energetic and dense mass of matter collapses into a molecular stellar cloud, which is compressed by its gravity. It begins to rotate around itself and attract the rest of the particles in this cloud to revolve around it in what is known as the disk supplied by the star.

As the mass of the newborn star increases, its attractiveness increases simultaneously, and the core of the star begins to compress more, which makes the temperatures inside it rise, and the star becomes compressed and hot over time to the point of starting nuclear fusion in its core.

After the star finishes making up its materials, many of the materials remain in the remnants of its supplied disk that revolves around it, which form the planets that orbit around this star, according to what we understand about the birth process of stars.

Astronomers think that the matter is different for gas giant planets such as Jupiter, as their formation begins from small ice and dust particles in the disk supplying any star, and as the emerging planet revolves around this nascent star, these small materials begin to collide and cling to each other with static electricity. With the passage of time, these clusters acquire a size greater than 10 times the size of the Earth and have sufficient gravitational force to attract more gases in the supplied disk of the star that it orbits and formed from.

At this stage, Jupiter grew in size until it became its current mass, which is 318 times greater than the mass of the Earth, equal to 0.001 of the mass of the sun, and as soon as it was able to devour all the elements and materials available to it, its growth suddenly stopped very far from the beginning of the hydrogen fusion.

Therefore, Jupiter was never able to become a star, and the reason for the similarity between its formation and the formation of the sun did not come from being a planet that failed to become a star, but rather because it came from the same gas cloud that formed the sun. 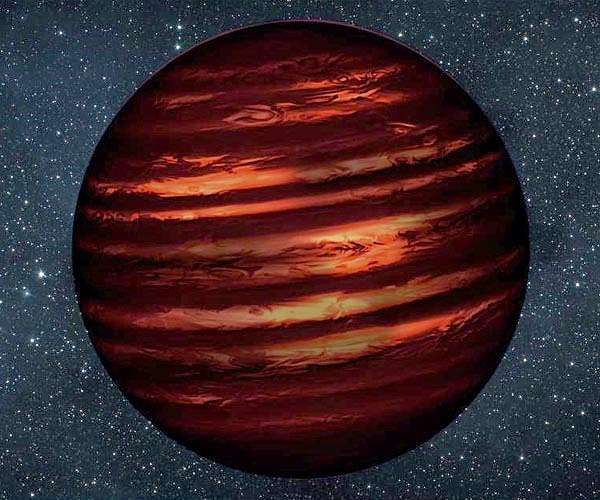 There is a completely different classification of celestial bodies that scientists call failed stars, and include brown dwarf stars, a class of stars that is the missing link between the birth of gas giants and the stars.

These stars are 10 times more massive than Jupiter, and most of them are made of heavy hydrogen, called deuterium, an isotope of hydrogen found in the proton and the neutron that makes up the atom, which is characterized by the fact that the temperature and pressure generated by its fusion are much lower than the normal hydrogen fusion temperatures.

Because of the opportunities for the rapid fusion of deuterium, its low temperature, and the low pressure that its fusion generates at a low mass, scientists consider deuterium fusion a first step in the hydrogen fusion from which most stars are born, because this fusion increases the mass of the celestial body, but some of these bodies fail to reach mass Required, and she ends up becoming brown dwarves.

The discovery of these brown dwarfs was announced in 1995, it was not known at the time whether these brown dwarfs were objects that failed to turn into stars, or could be considered ambitious planets, but after further studies, the results concluded that these bodies are not born from the disk providing the star Rather, it arises after the collapse of gas clouds, just as stars form from them, and some of them even have less mass than it should be to melt deuterium, making them indistinguishable from planets.

Going back to the data provided by NASA’s Juno spacecraft, we find that Jupiter’s nucleus was once solid, and models showed that the maximum mass required for planets to form is 10 times less than the mass of Jupiter.

That is why we cannot consider Jupiter a failed star, and thinking about the reason for this helps us understand the hidden system that runs this universe, which is a planet full of storms and swirls, and without Jupiter, there would not have been living on Earth in the first place.