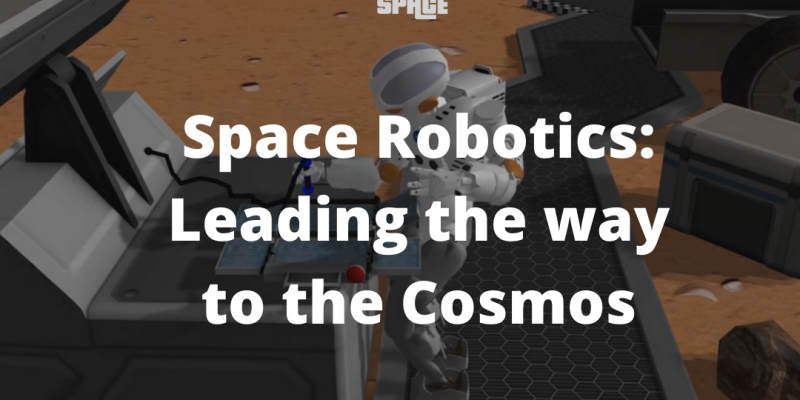 The space tech industry has been largely dependent on automation right from the very beginning and now with advanced technological know-how, this dependence is bound to increase exponentially, and it’s robotics that steps in to assist humans in exploring the unknown. 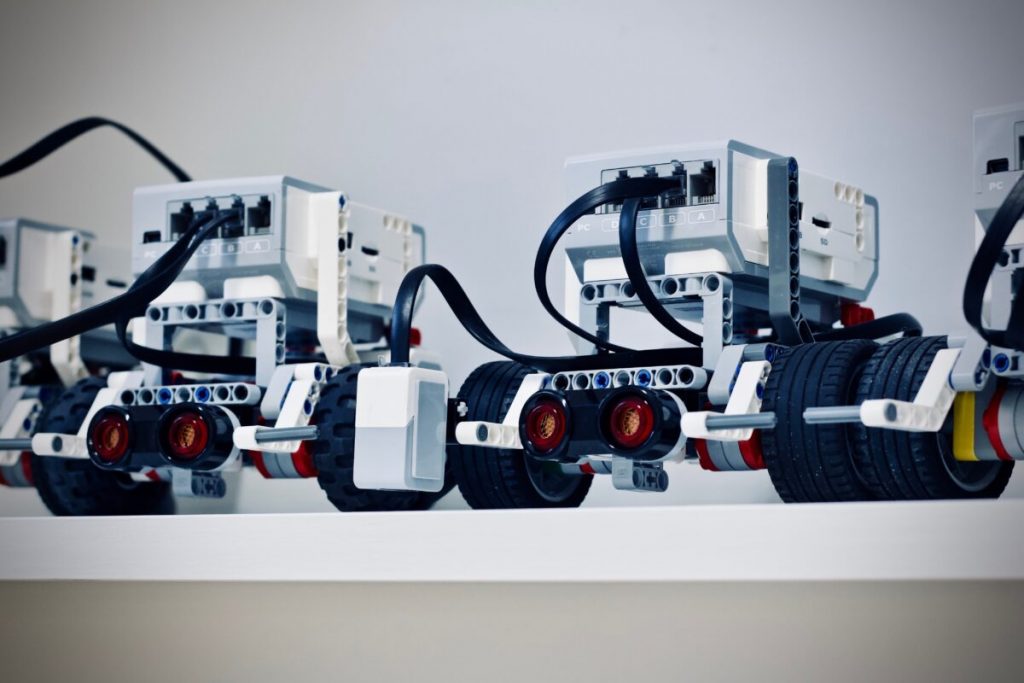 When the ISRO Inertial Systems Unit (IISU) unveiled the ‘VyomMitra’, an AI-powered humanoid robot in January 2020, with the intention of assisting the first Vyomanauts to space under the Gaganyaan Mission, many people were awestruck by her capabilities.

‘VyomMitra’ is just one of the many space-faring robots specifically designed to provide assistance, both technical and psychological, to astronauts who stay in isolation for long durations.  Another famous example is the JAXA ‘Kirobo’, which has a Toyota developed facial recognition software and language processing technology and was launched into space way back in 2013.

In fact, the success of ‘Kirobo’ has now culminated into full-fledged projects throughout the globe by various institutions such as the ‘Robonaut’ series, currently under development at the Dexterous Robotics Laboratory of the Lyndon B. Johnson Space Center.

The Buzz around Robotics:

The word ‘Robot’ is derived from the word ‘Robota’, meaning ‘Forced Labour’. Despite efforts by Ford and other pioneers against the use of this term, the name clung on, and only became more and more popular over the years.

The study of ‘Robotics’ commonly falls under the domain of  ‘Mechatronics’, which is the confluence of  Mechanical, Electronics, and Computer Science Engineering domains.

The primary intention of robots was to replace humans in hazardous workplace environments and performing routine, mundane tasks that were thought of as ‘too boring’ for humans.

Modern-day robots are highly flexible and with the advent of Artificial Intelligence and the Internet of Things, their capabilities are set to reach new heights.

The use of robots has improved safety, speed, consistency, and quality resulting in enhanced productivity and healthy happy, workplaces.

Terrestrially, robots have been used extensively in welding and painting processes, which pose a huge risk to human lives due to the noxious fumes and heat. They are also used for other mundane and repetitive processes such as assembly, material handling, and pick and place operations at industrial setups.

With the advancement in technology, robots are now being used extensively in health-care for both diagnosis and treatment, disaster management, surveillance, and even in the military for a wide variety of applications such as target acquisition, clearing landmines, and automatic weapon systems. 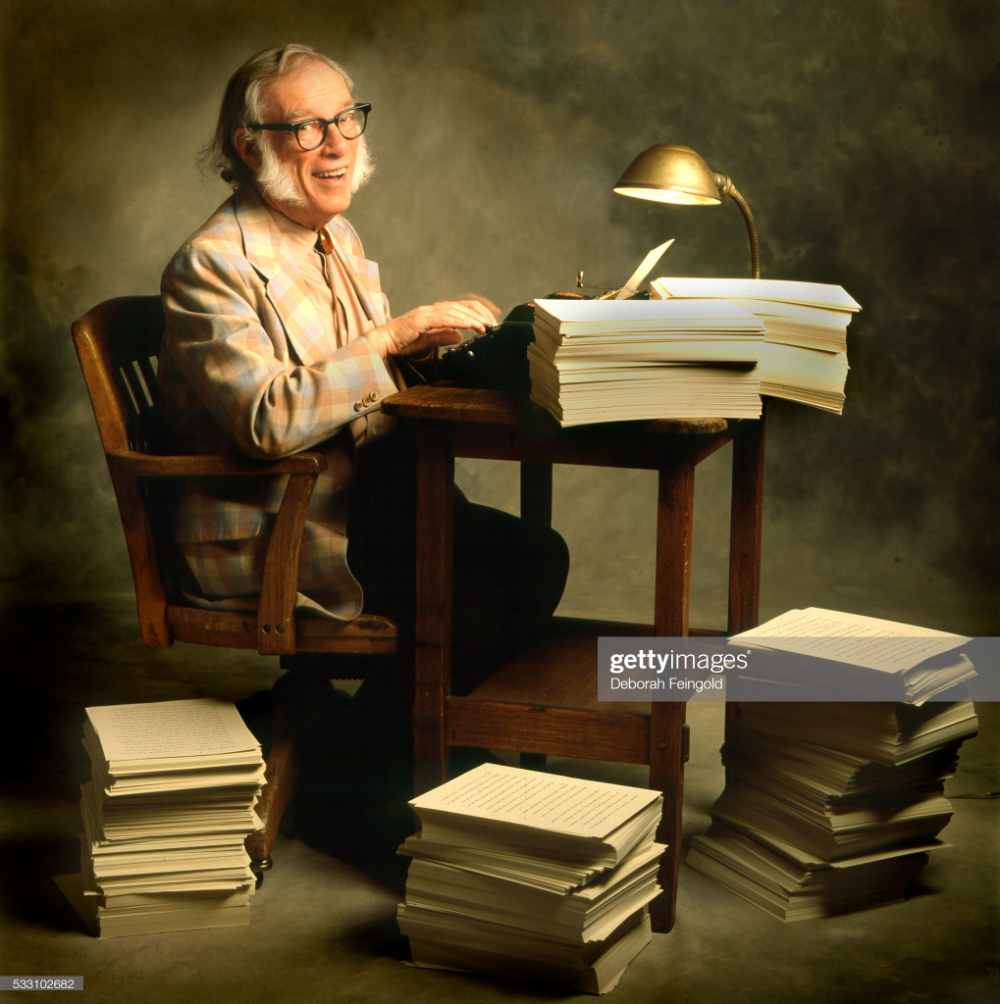 The need for ‘Space Robotics’ was envisioned even before mankind’s first venture into space, namely the ‘Sputnik’. Pioneers and authors like Isaac Asimov and Jules Verne penned down vivid descriptions of highly sophisticated and advanced space-faring vehicles with a significant level of automation. In fact, Isaac Asimov is credited with chalking out the three laws of robotics which are at the very foundation of robotics. The three laws are:

Law 2: A robot must obey all orders by human beings unless it conflicts with the first law.

Law 3: A robot must protect its own existence as long as it does not contradict the above two laws.

As said by Daniel H. Wilson, the New York Times best-selling author and a robotics engineer himself, “There is an endless number of things to discover about robotics. A lot of it is just too fantastic for people to believe.”

Space Robotics and its History:

‘Space’ is still a mystery in the eyes of humans. Despite years of study by observation and with over six decades of extensive ‘space exploration’, most of the cosmos is still unknown.

According to estimates, scientists have only been able to explore 4% of the visible universe, with the rest of the universe still lying unexplored.

Hazards associated with manned missions, such as prolonged exposure to high radiation, isolation, and confinement and the significantly large distances from the earth in a hostile environment pose a huge technical and logistical challenge.

Hence, ‘Space Robotics’ proves to be a viable alternative to manned missions. Robots can continuously carry out operations in a hostile environment while minimizing or eliminating risk to human beings completely. They can be monitored from significantly large distances and work at significantly higher speeds when compared to their human counterparts. 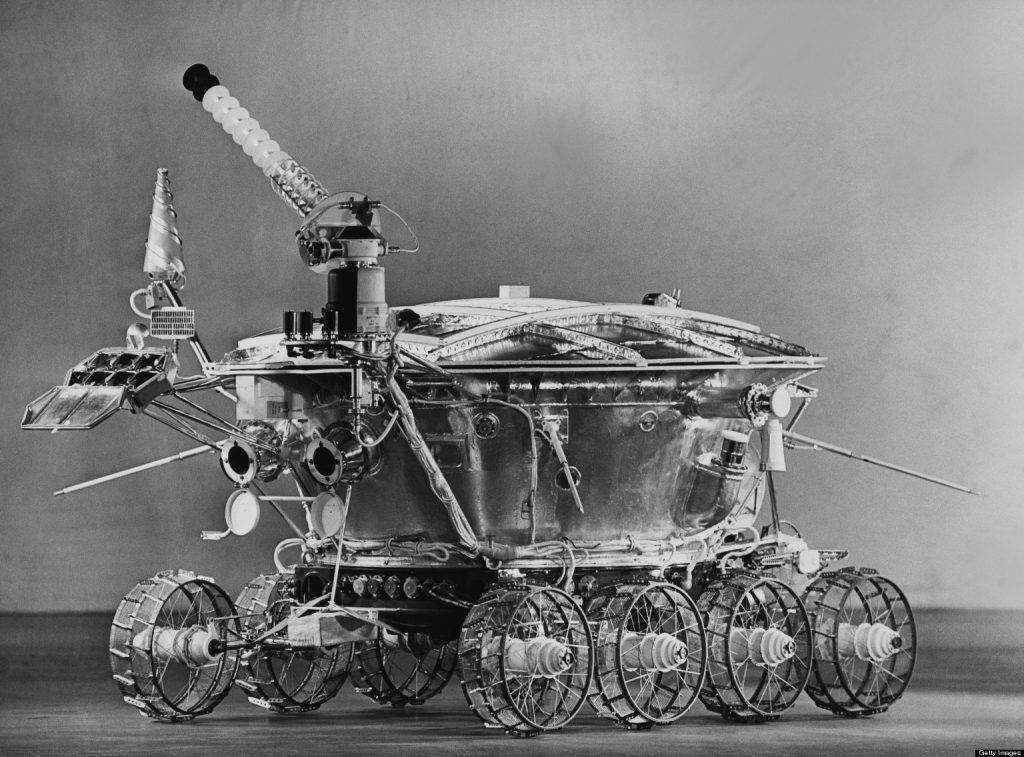 The history of ‘Space Robotics’ begins right from the beginning of space exploration. One of the most prominent of the initial robotic missions was the ‘Surveyor’ series of spacecraft sent to the moon between 1966 to 1968, the inputs of which played a prominent role in planning the ‘Apollo’ series of manned missions to the moon. Another important mission was the ‘Lunokhod 1’ – the first mobile robot to explore the extraterrestrial surface of the mission, which touched down on the moon’s surface in 1970.

Not only did these missions provide a significant amount of scientific data, but they also reaffirmed the capabilities and potential of robots in space exploration.

This led to an increasing number of robotic missions, which not only improved the quality and quantity of scientific data but also increased access to space.

Apart from this, robots have also been used to assist astronauts and perform multiple functions such as repair, pick and place operations, maintenance, and fault identification, and also psychological support.

With great reliability and capability, robots are sure companions on this journey of exploring the unknown, and with time, this bond is only going to get stronger.

A Peek into the Future: 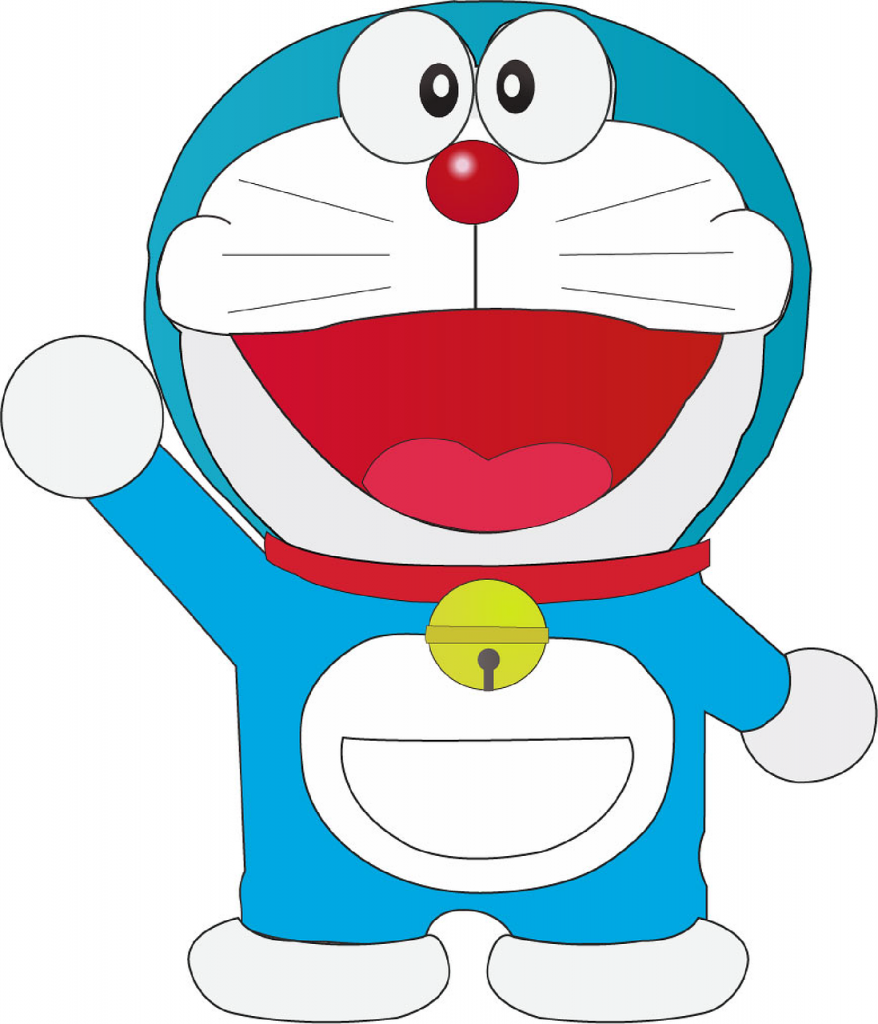 Given the pace at which technology is growing, it is quite difficult to predict how the future will be and how robots from the future will look like. People have vividly imagined our shared future with robots, with ‘Doraemon’: a robotic cat of the 22nd century created by Fujiko Fujio and ‘Archos R-14’: the villain of ‘Robopocalypse’, being on the two extreme ends of the spectrum. 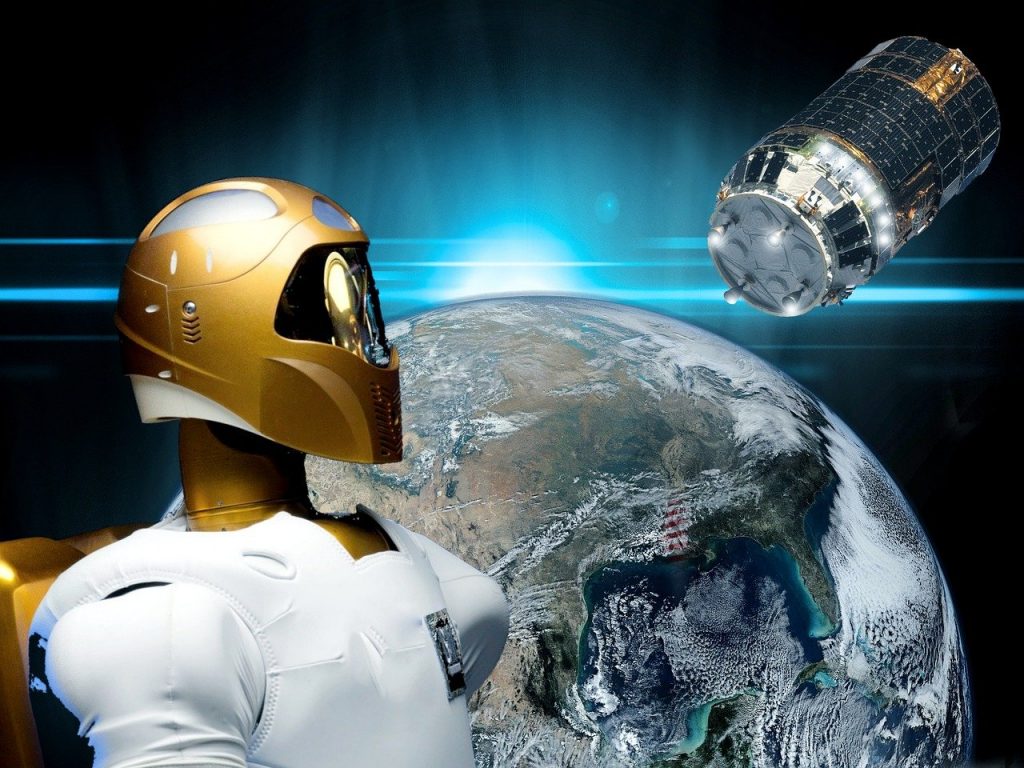 Space Robotics shall revolutionize the globe in a way unseen before
(Image Credits: pixabay.com)

Space Drones are one of the most ambitious applications of space robotics. These can hover over an area and provide 24 X 7 communication with entities such as rovers which are now susceptible to ‘communication blackouts’. Apart from this, the ‘Space Drones’ can be used extensively for imaging purposes and will provide better insight into the surface structure of other planets.

As for Humanoid Robonauts, they are already in place for several years now in terrestrial applications but with robots such as ‘Kirobo’ and ‘VyomMitra’, their domain has only expanded. NASA’s ‘Robonaut’ series is capable of handling tools and equipment just like humans, and their capabilities are seeing significant improvement over time. Soon, there will be a day when robots will be co-passengers with humans aboard the same spacecraft.

Augmented Reality can be an alternative to sending humans to other planets. Technologies such as holograms can be utilized to explore the surfaces of planets providing valuable scientific input to scientists. This data can be used for planning future manned missions to other planets.

Cyborgs essentially mean, integrating organisms and robots. These can help humans overcome their biological weaknesses and obtain extended capabilities. Elon Musk’s ‘Neuralink’ is one such venture, which aims to fuse humans and Artificial Intelligence.

Self-Replicating Robots are those robots capable of replicating themselves autonomously using raw materials in the environment. These can prove to be quite valuable in setting up human settlements on other planets. These settlements can be used as ‘Operations Base’ or ‘Transit Stations’, for future exploration.

Apart from these applications, there are an infinite variety of technologies under development that will revolutionize the way we think of the term ‘Space Exploration’. The applications of these technologies are not only limited to space but the ‘spin-offs’, which can be used to improve the quality of life of people around the globe.

The future, despite being seemingly ‘unpredictable’, is definitely ‘exciting’ and most possibly, realize the dream of mankind of being an ‘interplanetary species’.