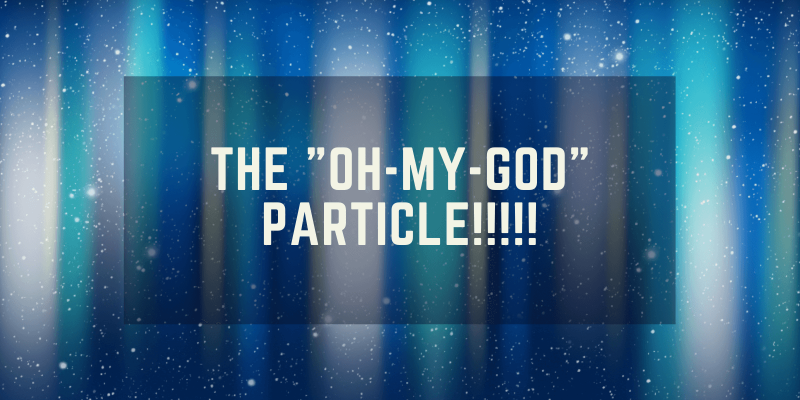 (The Oh My God Particle)

On October 15th, 1991 an observatory in Utah Detected something remarkable: a particle so powerful it was quickly nicknamed the “Oh – My – God particle”. But what exactly was it? And why haven’t we witnessed anything like it before or since?

Today let me tell you the extraordinary story of the highest – energy cosmic ray the world has ever seen. Cosmic rays were properly discovered in 1912, by Austrian – American physicist Victor Hess. They are high – energy, subatomic particles that are blasted through space. And they are also incredibly common with earth constantly being bombarded by them, though most are low energy and not particularly noteworthy. Although that cosmic rays, in general, originate from very bright points in the universe, like distant stars, supernovas, quasars and blazars. Our own sun could potentially throw out cosmic rays, but it’s thought that the higher – energy rays usually come from much further away.

For cosmic ray to be considered ultra-high-energy, it needs to score higher than one “EeV” or one “exa-electronvolt”; which has the same energy as a quintillion standard electronvolts. So, anything measuring more than one EeV is packing a truly staggering amount of energy!Seeing as we’re getting hit by cosmic rays all the time, though, what is it that makes the one sighted in Utah in 1991 so special? Well, to this day the Oh-My-God particle remains the highest energy cosmic ray ever seen, and though there have since been some similar cosmic rays detected, none have truly come close to matching this one.

The “OMG” particle had around 320 Exa-electronvolts of energy, was travelling at 99.99 (followed by 19 more 9s, 5, 1) percent the speed of light. This particular ray was so baffling that the scientists who observed it reportedly held back their discovery for another year before announcing it to the world because they feared that it had simply been a crazy anomaly. We’d really never seen anything like this before! Even by today’s standards, the OMG particles was around ten million times faster than any of the particles we’ve since accelerated inside the world’s largest machine the Large Hadron Collider.

Specifically, the OMG shattered something called the “Greisen-Zatsepin-Kuzmin Limit” which was named after physicists who came up with it, and is more commonly called the “GZK Limit”.
Formulated in 1966, the GZK limit said that no cosmic ray could ever have energy higher than 60 exa-electronvolts. This was because, despite how it appears to us, space isn’t “just space” it’s full of particles, including the photons that make up the cosmic microwave background radiation, or CMB. The GZK limit posits that if a cosmic ray had a higher energy than 60 exa-electronvolts, the photons in the CMB would effectively stop it in its tracks with cosmic ray particles crashing into CMB particles.

But the OMG particles broke the GZK limit more than five times over, and since its discovery there have been a few hundred other extreme-energy rays found to have exceeded 60 EeV. One explanation for violation of the GZK limit has to do with the particles themselves. It’s suggested that the GZK limit still applies and cannot be broken when the particle in the question is a proton, but that the particles in these “trans-GZK events” are made of heavier elements. Unfortunately, since it came and went so quickly, we have no way to know now whether the OMG was a proton or something else. And it’s the same story for all those other extreme energy cosmic rays detected afterwards, as well.For the OMG particle, in particular, we also have very little idea about exactly where it came from.

While it’s true that these particles are generally supercharged by incredibly bright objects like quasars or supernovas, when we look into the sky to try and find which quasar or supernova could have launched the OMG particle specifically, scientists are still drawing a blank. One part of the problem is that the trajectory of cosmic rays can be altered by something like the Milky Way’s own magnetic field. Observatories have detected that some other cosmic rays appear to come from the vague direction of the constellation Ursa major, but there’s no conclusive path to a source beyond that.

Of course, the other main problem when trying to understand cosmic rays of any kind is time. We don’t really know about them until they enter earth’s atmosphere, and then it all happens so quickly! We can only see them at all because of Cherenkov Radiation, which is the radiation produced when an object exceeds the speed of light relative to the medium it’s in – water perhaps. But, even then they’re only very briefly visible. With the OMG particle, because of the huge amount of energy it harbored, it was almost impossible to draw any meaningful conclusions other than “it happened”. We are making some progress in studying cosmic rays however.

The telescope array project in Utah – the same the OMG particle was discovered in started up in 2008, with 507 surface detectors. One key findings of the array so far have been that about 27% of all the detected ultra- high-energy cosmic rays we experience come from just 6% of the sky. This apparent “hotspot” once again appears to lie in the direction of Ursa major, so we are at least searching in roughly the right place! But there are still many more puzzles to solve especially as the Pierre Auger Observatory in Argentina has reportedly found evidence of another “warm spot”, in the direction of Centaurus A – the fifth brightest galaxy in earth’s sky.

Scientists and analysts hope that one day we’ll be able to locate exactly what’s throwing out these cosmic rays like there’s no tomorrow and precisely where it is. And perhaps then we’ll better understand what we once saw thrown toward our galaxy at more than 99.99% the speed of light, back in 1991. For some, it’s one of the greatest mysteries of space. But who knows, given the endless possibilities that the universe holds, maybe we’ll one day observe something to beat even the seemingly inimitable “OMG Particle”. May be; What do you think?