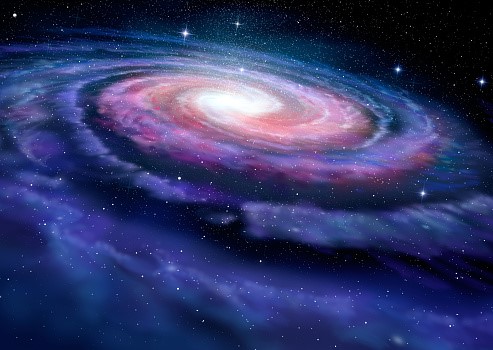 New research reveals that the center of the Milky Way is a powerful particle accelerator, and there is also an unknown mechanism that prevents cosmic rays from penetrating the vast cloud called the central molecular region.

This discovery will be a supposer for the idea to get nearer to the cosmic rays. Particles such as protons and atomic nuclei are constantly flowing through space, almost at the speed of light.

The Galactic Center is a mysterious region, but we have a pretty good idea of ​​what is out there. The region is so dusty that we cannot study it over a wide range of wavelengths, from X-rays to visible light, which puts some limitations on the study.

Astronomers speculate that the galactic center is a large source of cosmic rays. These protons and nuclei are stripped of electrons and accelerated to relativistic speeds by strong magnetic fields.

At the center of our galaxy, there are many things that may act as cosmic ray accelerators: supernova remnants, pulsating wind nebulae, and the supermassive hole in the center of the Milky Way, Sagittarius A*.

According to observational and modeling data, the distribution of cosmic rays throughout the Milky Way should be smooth and nearly constant. Cosmic rays emerge from accelerators, propagate through the galaxy’s magnetic field, and maybe slow down or accelerate to produce what astronomers call a cosmic ray sea.

With the advancement in the field, there are more than a kind of cosmic rays that are evolving; however, scientists are going well on the track.

Fortunately, cosmic rays are very active. This means that we can detect them in the center of the galaxy because this energy band produces light in the finite wavelength range that penetrates the dust there.

Cosmic rays may interact with the interstellar medium, and gas and dust circulate between the stars, producing high-energy gamma-ray photons, with about 10% of the energy of the cosmic ray source.

Fermi-Gamma rays telescope actually helped a team led by astronomer Xiao Wanhuang of the Chinese Academy of Sciences investigated gamma radiation in the central molecular cloud of the Milky Way to find the sources of cosmic rays.

The detected gamma rays indicated that the galactic center is a high-energy particle accelerator, or that something in that region had this effect. They also found something really surprising.

According to the team’s calculations, the intensity of cosmic rays in the central molecular cloud is lower than that of the cosmic ray sea. Furthermore, with those sights, we can say there are such types of obstacles for the cosmic rays.

This barrier should be a topic for future research, and many interesting possibilities exist. The collapse of the denser parts of the cloud could compress the magnetic fields which could be a hindrance, or it could be the magneto-hydrodynamic turbulence.

Solar winds are considered an important factor for cosmic rays. Galactic winds may play a similar role at the galactic center. The team calculated the intensity of cosmic rays in the presence of galactic winds and obtained a result similar to the gamma-ray data analysis.

However, the advancement of science will greatly assist this kind of nomenclature, and we cannot wait to see that happening.

More detailed 3D modeling of the galactic center may help shed light on the origin of cosmic rays and how they travel in the Milky Way, the researchers say.