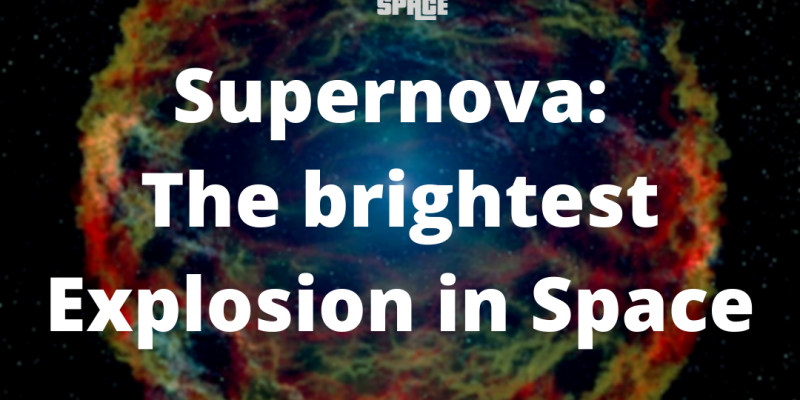 What is a supernova?

It is a bright, brilliant star in one of the corners of the universe. It was not present a few hours ago, but now it illuminates the sky. It is not a star specifically, or at least not currently. That bright point in the sky is a star that has reached the end of its life and exploded in a supernova.

Many civilizations recorded their observations of the supernova long before the invention of telescopes. According to NASA, in 185 BC, the earliest observation of the supernova was by Chinese astronomers, whose records showed that a so-called guest star appeared in the sky for eight months. Before the 17th century AD – when telescopes were available – the number of supernovae recorded was only 7, according to the Encyclopedia Britannica.

The most famous supernova currently is the Crab Nebula. Chinese and Korean astronomers recorded the explosion of this star in 1054 AD. According to rock drawings found in Arizona and New Mexico, it may have been seen by the indigenous people of America. The supernova called the Crab Nebula, so bright that astronomers could see it clearly during the day.

Other supernovae observed before the invention of telescopes were in 393, 1006, 1181, and 1572 – which were studied by the famous astronomer Taco Brahe – Brahe wrote his observation on this new star in 1604 in his book (de nova Stella). From which we took the name, Nova. However, the nova differs from the supernova despite being a sudden explosion of stars as the burning gases come out. But the supernova explosion is evidence of the end of the star’s life.

The term supernova was not used before the year 1930 AD, and Walter Bad and Frito Zwicky were the first to use this term in conjunction with the discovery of an explosion in the Ender and Meda galaxy. It indicated that supernovae occur when a star collapses and turns into a neutron star. In our modern era, one of the most famous supernovae is sn 1987a, discovered in 1987 and which is still being studied until now to note how supernovae evolve in the first decades of the explosion.

The death of the stars:

On average, a supernova occurs approximately every 50 years in galaxies the size of the Milky Way, but in the universe, a star may explode every second, and some may not be far from the planet Earth. About ten million years ago, a group of explosive supernovae formed the so-called spatial bubble has exceeded 300 light-years in size, like a bubble of gases formed in the shape of a bean that surrounded the solar system. 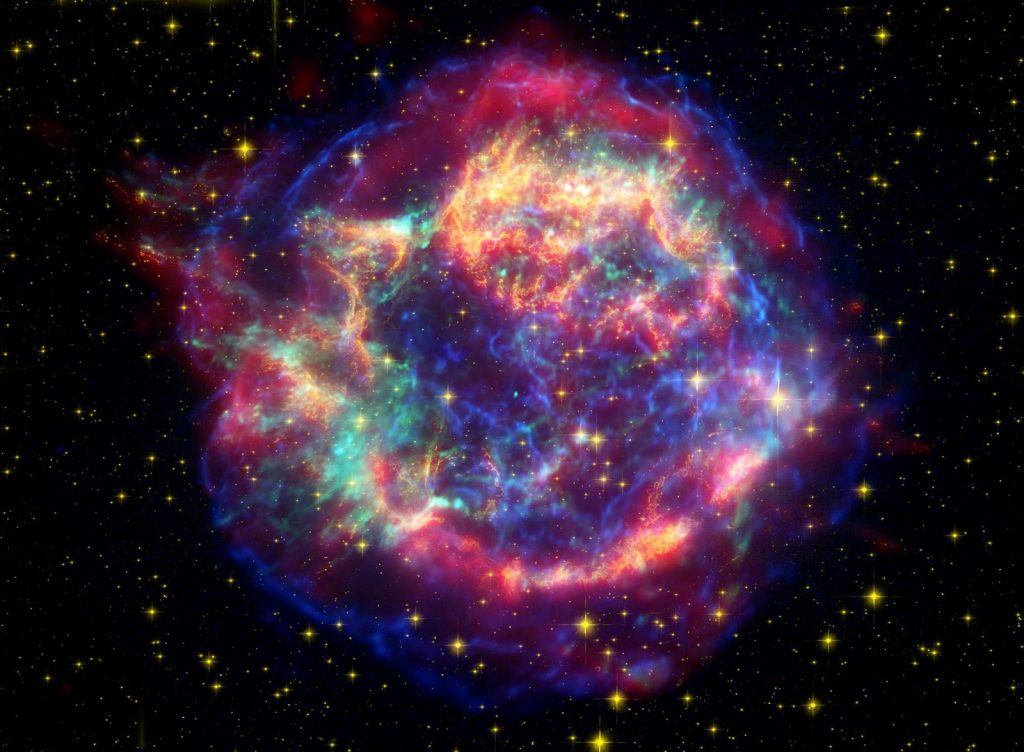 The death of a star depends most of the time on its mass. For example, the sun does not contain the appropriate mass to form a supernova, although it is not good news for the planet Earth. After about 2 million years and after the nuclear fuel runs out from the sun, it will turn into a red giant that in turn will evaporate Planet Earth before it started to cool off and form a white dwarf.

A star can transform into a supernova in one of two ways:

Let’s examine the interesting second type first, to explode a star that must be twice the size of our sun (roughly 8 to 15 times). It runs out first of hydrogen and then helium until it runs out of fuel in the center of the star, and despite that, it still maintains enough mass to incorporate carbon. Here’s what happens next:

Very dense material is left called the neutron star, and it is a city-sized star that has a mass equal to the mass of the sun, and the second type can be of other types, based on its light waves. It is also thought that stars of massive sizes – 20 to 30 times the size of the Sun – do not explode into a supernova but are instead black holes.

As for the first type of supernova, hydrogen is lost in their light waves. It is believed that the A1 type of supernova originates from a white dwarf in a closed binary system. The stellar materials are greatly compressed to cause a set of nuclear reactions, which ultimately lead to the formation of the supernova.

Astronomers describe this type of supernova as a luminous candle to measure space distances because they believe it is evenly lit at the peak of the explosion. For Type 1B and 1C, the nucleus collapses, as in the second type of supernova, after losing most of its hydrogen.

Have we seen it explode?

Recent studies have shown that a supernova before its explosion emits sound vibrations just before the explosion as per records. In 2008, scientists caught for the first time a supernova as it exploded. A month, but instead saw a bright five-minute explosion of X-rays. On this observation, they became the first astronomers to see an explosion of a star.

Observing the waves of a supernova explosion hitting another star (Image Credits: almaalomah.com)

How hot are the atoms released from the supernova explosion?

A new method for measuring the temperature of the atoms released by the explosion of a star in its dying phase will help scientists understand the shock wave emitted as a result of supernovae, or what is known as a supernova.

An international team of researchers gathered observations of nearby supernova remnants and the formation of a star’s explosion, using simulations to measure the temperature of the slow gas atoms surrounding it as they were heated by materials pushed out of the explosion. Using NASA’s Chandra X-ray Telescope, the research team analyzed long-term observations of the remnants of a supernova called SN1987A and built a model to describe the supernova.

The team agreed that the temperature of the heavy atoms – which was not observed – is related to their atomic weight, thus providing an answer to a long-term unanswered question about shock waves, and important information about the physical processes that take place by them, the research paper describes the results that appeared January 21, 2019, in the journal Nature Astronomy.

David Burrows, professor of astronomy and astrophysics in Pennsylvania and author of the paper, reported: Supernovae and their remnants provide cosmic laboratories that allow us to explore physics in situations that cannot be achieved on Earth.

Modern astronomical telescopes and equipment with a ground or space basis have allowed us to study supernovae in our galaxy or nearby galaxies, as we have conducted regular studies of supernova remnants using NASA’s Chandra X-ray Telescope, which is the best X-ray telescope in the world since Launched in 1999.

The use of simulations provided answers to long-standing shock wave questions. The explosion of a giant star pushes material outward at a speed of up to one-tenth of the speed of light, pushing this shock wave toward the interstellar gas.

The attention of researchers is focused on the front part of the shock waves, moving instantaneously at high speeds to the speed of sound, as well as the gas moving at relatively slow speeds. The front shock heats the moving gas at a relatively slow speed to degrees up to millions of degrees as that temperature is suitable for the gas to emit X-rays. So, it can be detected from the ground.

“The abrupt transition is similar to that which you can observe in the kitchen when the water hits the bottom of the sink at high speed. It flows smoothly outward until it suddenly jumps in height and becomes turbulent”, Burrows said. “The sudden transition has been particularly studied in the atmosphere where it occurs very close by.” The situation is different for gradual transformations, and the mode of exposure to different atoms may also differ according to substances.

A research team led by Marco Kekeli and Salvatore Orlando from the University of Palermo, Italy, measured the temperatures of different elements behind the frontal shock, which will develop our understanding of the physics of the shock process, and it is expected that the temperature is proportional to the atomic weight of the elements. But measuring the accurate temperature is difficult, and other studies led to contradictory results due to neglecting that relationship and failed to include the elements with heavy atomic weights. So, the team turned that supernova into a tool to solve this dilemma.

This nova – which has already been mentioned and is the subject of study – is located in the Great Maglane constellation and is the first nova that can be observed with the naked eye since Kepler’s supernova in 1604, and is also the first to be observed with modern astronomical instruments.

The light from the explosion reached Earth on February 29, 1987, and since then, it has been observed with all available wavelengths, X-rays, and gamma radiation. The team has used that information to build a model to describe the supernova.

The models built for that supernova were based on single observations, but in that study, the researchers relied on 3D simulations to simulate the evolution of the supernova from its inception until now, and the comparisons between the X-ray observations and the models that were built allowed the physicists to measure the atomic temperatures of many Materials span a wide range of atomic weights, as well as access to relationships describing temperatures for each type of atom in the interstellar gas.

But the concerning question is: Will we observe a huge supernova in the next century?