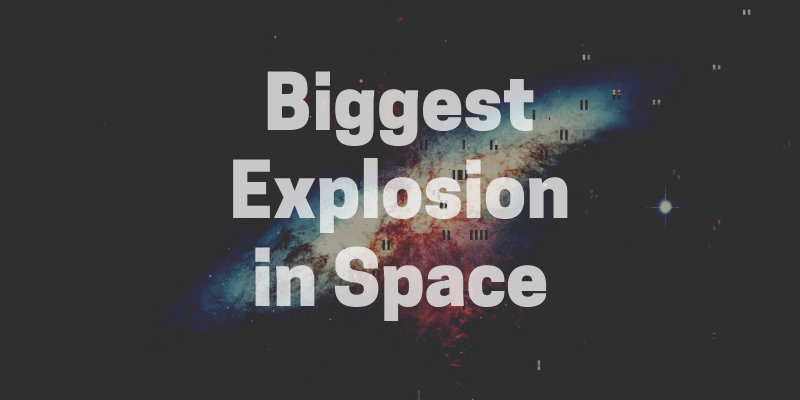 The most catastrophic explosion that we can ever see in space is called a supernova explosion. Each supernova blast is the extremely bright, super-powerful explosion of a star.

What causes a supernova?

When an extremely massive star is dying – it might explode its core into a cataclysmic explosion. This happens when a star at least five times the mass of our sun goes out with a fantastic bang!

At the core of massive stars, huge amounts of gases like hydrogen, helium are constantly burning to generate tons of energy – making the center of the star very hot. The enormous amount of energy generates pressure, and this pressure from the star’s nuclear burning keeps pushing the star outwards, preventing the star from collapsing.

Two opposite forces maintain a balance in the star. The huge gravity of the star tried to squeeze the star into the smallest, tightest ball possible. However the outward pressure from the nuclear fuel burning in the star’s core resists the inward squeeze of gravity.

When a massive star runs out of fuel, it cools off. This causes the pressure to drop. Gravity starts winning, causing the star to collapse. Imagine something one million times the mass of Earth collapsing in 15 seconds! The collapse happens so quickly that it creates enormous shock waves that cause the outer part of the star to explode!

Usually a very dense core is left behind, along with an expanding cloud of hot gas called a nebula. A supernova of a star more than about 10 times the size of our sun may leave behind the densest objects in the universe—black holes.

How bright are these explosions?

These spectacular events can be so bright that they outshine their entire galaxies for a few days or even months. They can be seen across the universe.

How frequently do the supernova explosions occur?

Not very. Astronomers believe that about two or three supernovas occur each century in galaxies like our own Milky Way. Because the universe contains so many galaxies, astronomers observe a few hundred supernovas per year outside our galaxy. Space dust blocks our view of most of the supernovas within the Milky Way.

What can we learn from supernovas?

Scientists have learned a lot about the universe by studying supernovas. They use the second type of supernova (the kind involving white dwarfs) like a ruler, to measure distances in space.

They have also learned that stars are the universe’s factories. Stars generate the chemical elements needed to make everything in our universe. At their cores, stars convert simple elements like hydrogen into heavier elements. These heavier elements, such as carbon and nitrogen, are the elements needed for life. Only massive stars can make heavy elements like gold, silver, and uranium. When explosive supernovas happen, the dying stars blasts out all these elements in distant parts of space..

All the carbon and calcium in our bodies, all the gold and silver inside the earth ultimately came from a star that died and exploded somewhere blasting these remnant elements into space.

We have stuff in our bodies as old as the universe! Everything we are and everything in the universe and on Earth originated from these Supernova explosions and eventually stardust, and it continually floats through us even today.

And so it wouldn’t be wrong to say – we’re all made of Stardust!