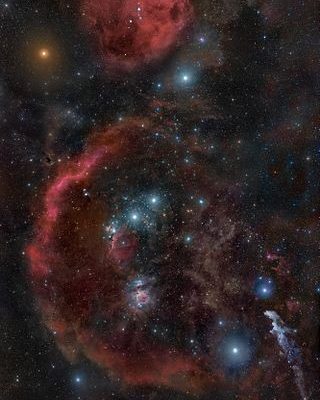 For decades cosmologists have wondered whether the universe has a proportional fractional structure, i.e., is the universe just an irregular mass of space objects, or is there some kind of coordinated arrangement and self-similarity in the form of its small and large parts? After completing huge surveys of galaxies, scientists eventually came up with the answer.

In the early 20th century, astronomers – beginning with Edwin Hubble and his discovery of the enormous distance between the Milky Way and the closest galaxy to us – Andromeda – began to realize that the universe is too vast to imagine.

And that we can see galaxies near and far and scattered, hence the same question: Is there a certain pattern for arranging these galaxies, or is it completely random?

At first, it just seemed random; Astronomers saw giant galaxy clusters, each containing a thousand or more galaxies, while smaller clusters are consisting of fewer galaxies, in addition to galaxies that swim in space alone on their own. These observations made scientists believe that the universe’s structure does not obey exclusively one style.

These observations were consistent with what scientists had previously assumed, the premise of the cosmic principle that the universe is mostly homogeneous and has uniform characteristics in every place and in all directions.

But in the late seventies, space surveys became very complex galaxies, suggesting a pattern in the arrangement of galaxies. In addition to galaxy clusters, there were also long and thin filaments of galaxies, galaxy clusters like wide walls, and then voids appeared, which are vast areas of space. Astronomers have called this web of galaxies the “cosmic web.”

This pattern in the distribution of galaxies would contradict the principle of the universe because it means that large regions of the universe do not look the same everywhere.

One of the hypotheses came from the mathematician Beno Mandelbrot, founder of fractional geometry, which is defined as shapes that repeat and are characterized by self-similarity on all scales, and at different levels of magnification and reduction.

The concept of fractals was not invented by Mandelbrot, as mathematicians have studied self-similar patterns throughout the ages, but he coined the word fractional and incorporated it into our modern study of the concept.

Fractals surround us in nature, and the mathematics of fractal geometry has enabled us to understand a wide range of similar structures in the universe.

Mandelbrot speculated that if fractals were ubiquitous, then maybe the entire universe was fractal, and perhaps what we saw was a pattern in the arrangement of galaxies is a miniature image of enormous patterns of fractals.

With the succession of scientific discoveries about the cosmic network, astronomers’ knowledge of the Big Bang history increased; They have found ways to explain the existence of large-scale patterns in the universe.

Several of their theories predicted that the universe was still only homogeneous on much larger scales than previously observed by astronomers.

But the final test of the fractional universe hypothesis was not made until this century, when gigantic surveys, such as the Sloan digital scan of the sky, were able to locate millions of galaxies and paint a picture of the cosmic network at scales never before observed.

If the fractional universe hypothesis is correct, then we should see our local cosmic network embedded within a much larger cosmic network, but if it is false, then at some point, the cosmic network must stop being symmetric, and it looks like a large random piece of the universe, just like any other random piece.

The result is an amazingly homogeneous universe that takes up to 300 million light-years before you notice the universe is homogeneous in its parts. The universe is certainly not fractal, but parts of the cosmic web still have fractal-like properties.

For example, masses of dark matter called halos form interconnected structures and substructures, with sub-halos from which other sub-halos descend.

The vacuums of the universe are also not empty, as they contain a few faint dwarf galaxies arranged in faint patterns and thin filaments of the cosmic web. In computer simulations, subspaces within this structure contain their cosmic networks as well.

So, while the universe as a whole is not fractional, Mandelbrot’s hypothesis did not hold, and we could still find fractional geometry nearly everywhere in our universe.

Furthermore, Patterns of spiral galaxies tell us that the structure of the universe is not random. Yet, there is still a lot to learn about the universe, and knowing that a wide network of strings links everything, we tend to assume that the distribution of the galaxies between those filaments is somewhat random, in other words, scientists think that if you observe a patch of sky, you will notice that all the directions of galaxies’ rotation in that area appear roughly equal. Still, it turns out that this assumption may be wrong recently.

Computational astronomer, Lior Shamir of Kansas State University, conducted a survey of 200,000 galaxies and found that the distribution of the direction of rotation forms a non-random pattern. This pattern may fit the quadrilateral alignment with a greater likelihood of being a coincidence, indicating that the early universe may have been rotating like a galaxy.

Shamir presented his research – which has not yet been revised – at the 236th meeting of the American Astronomical Society. In his research, Shamir says:

“The cosmic microwave background data provides evidence of the potential for polarization of the cosmic domain and is consistent with quadruple alignment. These observations led to a change in the standard cosmic models. Wide patterns in the distribution of the direction of rotation may be evidence of a rotating universe.”

Spiral galaxies are relatively well-defined and arranged in the form of a flat disk, spiral arms, and a rotation that we can measure based on the Doppler displacement of light from both sides of the disk.

But when Shamir did his census using data from the Sloan Digital Survey of the Sky, the Panoramic Survey Telescope, and the Rapid Response System, he discovered something very strange.

Shamir also found that the asymmetry itself is not uniformly distributed, so near the Earth, the distribution of galaxies is equal. Still, the farther away in the universe, the more asymmetry appears. Shamir believes that these results may suggest that the early universe was less chaotic than today and that its symmetry decreases over time.

The difference in asymmetry across different parts of the universe corresponds to a quad-axis pattern, that is, the universe was not rotating around one axis but rather about four axes in a complex alignment.

The quadrilateral axis in the cosmic microwave background (the faint radiation left over from the Big Bang from which the universe arose) is referred to as an anomaly, a node, or an axis of evil.

Since the cosmic microwave background is so faint, it is possible that the signal that arrived was contaminated by the brighter light in our universe today.

However, the rotation of galaxies is easy to measure. Shamir’s research indicates that a quad-axis CMR may pose a more serious problem than cosmologists thought.

Shamir says: “There is no defect or pollution that may reveal itself through these complex and consistent individual patterns. We have two different surveys of the sky showing the exact same patterns; even when the galaxies are completely different, no error may lead to that. These are the features of our universe in which we live, our home.“

Suggested Reading: Is there more than some kind of Dark Energy?