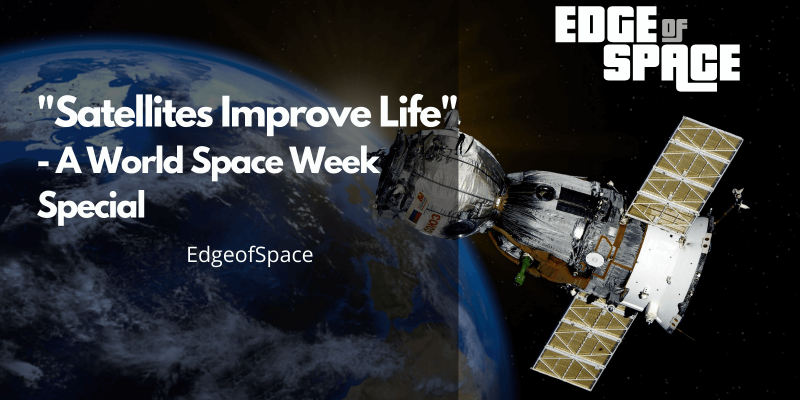 Earth and the moon are examples of natural satellites. Thousands of artificial, or man-made, satellites orbit Earth. Some take pictures of the planet that help meteorologists predict weather and track hurricanes. Some take pictures of other planets, the sun, black holes, dark matter or faraway galaxies. These pictures help scientists better understand the solar system and universe.

Still other satellites are used mainly for communications, such as beaming TV signals and phone calls around the world. A group of more than 20 satellites make up the Global Positioning System, or GPS. If you have a GPS receiver, these satellites can help figure out your exact location.

Satellites were exotic, top-secret devices. They were initially used in a military capacity, for activities such as navigation and tracking enemy’s location. Now they are an essential part of our daily lives. We see and recognize their use in weather reports, television transmission by Tata-Sky and the DISH Network, and everyday telephone calls. In many other instances, satellites play a back role that figuratively escaped our notice.

Some newspapers and magazines are more timely because they transmit their text and images to multiple printing sites via satellite to speed local distribution. Before sending signals down the wire into our houses, cable television depends on satellites to distribute its transmissions.

Nowadays taxi services like Ola and Uber are using the satellite-based Global Positioning System (GPS) to take us to the proper destination.

The goods we buy often reach distributors and retailers more efficiently and safely because trucking firms track the progress of their vehicles with the same GPS. Sometimes firms will even tell their drivers that they are driving too fast. Emergency radio beacons from downed aircraft and distressed ships may reach search-and-rescue teams when satellites relay the signal.

The Soviet Union inaugurates the “Space Age” with its launch of Sputnik, the world’s first artificial satellite. The spacecraft, named Sputnik after the Russian word for “satellite,” was launched at 10:29 p.m. Moscow time from the Tyuratam launch base in the Kazakh Republic. Sputnik had a diameter of 22 inches and weighed 184 pounds and circled Earth once every hour and 36 minutes. Traveling at 18,000 miles an hour, its elliptical orbit had an apogee (farthest point from Earth) of 584 miles and a perigee (nearest point) of 143 miles. Visible with binoculars before sunrise or after sunset, Sputnik transmitted radio signals back to Earth strong enough to be picked up by amateur radio operators.

On January 4, 1958, it fell back and burned in Earth’s atmosphere. The launch of Sputnik 1 shocked many Americans, who had assumed that their country was technologically ahead of the Soviet Union, and led to the “space race” between the two countries.

Satellites can be used to study and analyse the differences in weather and climate as well as changing climate in other planets. NASA satellites help scientists study Earth and space. Satellites looking toward Earth provide information about clouds, oceans, land and ice. They also measure gases in the atmosphere, such as ozone and carbon dioxide, and the amount of energy that Earth absorbs and emits. And satellites monitor wildfires, volcanoes and their smoke.

Satellites that face toward space have a variety of jobs. Some watch for dangerous rays coming from the sun. Others explore asteroids and comets, the history of stars, and the origin of planets. Some satellites fly near or orbit other planets. These spacecraft may look for evidence of water on Mars or capture close-up pictures of Saturn’s rings.

Weather satellites help scientists study weather patterns and forecast the weather. Weather satellites observe the atmospheric conditions over large areas. Some weather satellites travel in a sun-synchronous, polar orbit, from which they make close, detailed observations of weather over the entire Earth.

Their instruments measure cloud cover, temperature, air pressure, precipitation, and the chemical composition of the atmosphere. Because these satellites always observe Earth at the same local time of day, scientists can easily compare weather data collected under constant sunlight conditions.

The network of weather satellites in these orbits also functions as a search and rescue system. They are equipped to detect distress signals from all commercial, and many private, planes and ships. Other weather satellites are placed in high altitude, geosynchronous orbits. From these orbits, they can always observe weather activity over nearly half the surface of Earth at the same time. These satellites photograph changing cloud formations. They also produce infrared images, which show the amount of heat coming from Earth and the clouds.

Navigation satellites enable operators of aircraft, ships, and land vehicles anywhere on Earth to determine their locations with great accuracy. Hikers and other people on foot can also use the satellites for this purpose. The satellites send out radio signals that are picked up by a computerized receiver carried on a vehicle or held in the hand. Navigation satellites operate in networks, and signals from a network can reach receivers anywhere on Earth. The receiver calculates its distance from at least three satellites whose signals it has received. It uses this information to determine its location.

Earth observing satellites are used to map and monitor our planet’s resources and ever-changing chemical life cycles. They follow sun-synchronous, polar orbits. Under constant, consistent illumination from the sun, they take pictures in different colors of visible light and non-visible radiation.

Computers on Earth combine and analyze the pictures. Scientists use Earth observing satellites to locate mineral deposits, to determine the location and size of freshwater supplies, to identify sources of pollution and study its effects, and to detect the spread of disease in crops and forests.

Military satellites include weather, communications, navigation, and Earth observing satellites used for military purposes. Some military satellites — often called “spy satellites” — can detect the launch of missiles, the course of ships at sea, and the movement of military equipment on the ground.

Millions of illiterate people in remote, rural India have access to education now, because a satellite devoted exclusively to long distance learning, was launched on 20th Sep 2004 by ISRO. It is the world’s first dedicated educational satellite. India launched the $20 million, 2-tonne EDUSAT from the Satish Dhawan Space Centre at Sriharikota, a tiny island in the Bay of Bengal. It is the heaviest ever satellite launched by an Indian-made rocket – the new Geosynchronous Satellite Launch Vehicle (GSLV), which cost $33 million.

About 35% of the country’s billion-plus population were illiterate as per the 2001 government census. “India will require 10,000 new schools each year and meeting the teaching needs on such a scale [by conventional methods] will be impossible,” Madhavan Nair, former chairman of ISRO, explained in the importance of Edusat.

The satellite utilises an antenna with a 1.2-metre reflector to direct the KU-band spot beams towards their intended regions. This enables information to be broadcast in relevant local languages – India has 18 official languages and over 400 dialects. The educational programmes can be viewed on any television set through a simple low-cost receiver costing about $65, Nair says.

The information passed by these satellites provided new insights about Earth and has helped develop new concepts about how the Earth was formed. From the information given by Earth-orbiting satellites we now know that the Earth is one of the most geologically active of all the planets and moons in the solar system. Earth is constantly changing over long periods of time as land is built up and worn away, oceans are formed and reformed, and continents move around, break-up and merge.

Life itself contributes to adapt on earth, especially in the way living things can customize Earth’s atmosphere. Today scientists are working towards placing into orbit faster and safer satellites, which will last longer in orbit. Advances made in satellites manufacturing, engineering and a variety of scientific fields have broadened our knowledge about Earth. In conclusion, by studying Earth’s atmosphere, its surface, and its core, scientists have learned much about how earth came into existence, how it changed, and why it continues to change.