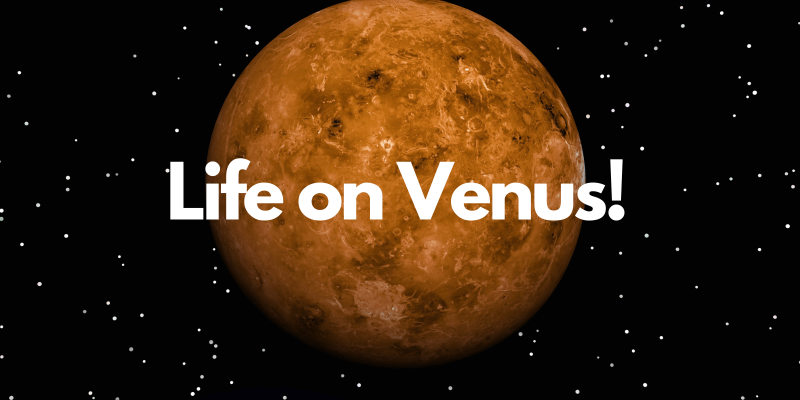 Incredible news has just been announced by a team of astronomers perhaps one of the most important discoveries in decades. Possible evidence of life has been announced on another planet, Venus.

This news is exciting as perhaps it is surprising to many of us. for years we’ve looked at mars as our best bet for finding life in the solar system indeed NASA has invested far more effort into orbiters, landers, and rovers on Mars than Venus. Which only soviets have ever landed upon. the reason for this is simply the surface temperature scorching 460 degree Celsius enough to melt lead and it has a surface pressure similar to that as being a kilometer underneath the ocean and so this result perhaps surprises many of us because after all how could life possibly survive on the surface of Venus even these soviet probes could only last a couple of hours well things do indicate indeed look on grim on the surface but they look a little bit better if we head on up 50 kilometers up into the clouds.

Up here the pressures drop and the temperature becomes balmy comparable to that of the earth. Something like 30 to 80 degrees Celsius. Yet more on earth we do find microbial life in the clouds up to 2 million tons of bacteria are lofted up from the ground via air currents as well as fungal spores and microalgae which are thought to even influence the precipitation rays. So, the idea of cloud creatures is clearly and legitimate but to avoid raining down back on to the hellish surface these microbes would want to have some degree of buoyancy to stay up but because of Venus has a much thicker atmosphere than the earth then what would be easier.

The next challenge for Venusian life is the atmospheric composition. The atmosphere is almost entirely made up of carbon dioxide and the clouds are highly acidic comprised of sulphuric acid. Now, most of life on earth would pretty much immediately die in such horrifically acidic conditions. But some microbial organisms on earth thrive in acid known as acidophiles.

Now these acidophiles much like the other extremophiles are the products of billions of years of evolution they have highly sophisticated molecular machinery within them to cope with those conditions and so if there is indeed living in the clouds of Venus then a natural explanation would be that it is started on the surface it evolved it adapted and then ended up going up into this extreme environment much later billions of years after it initially started.

The idea that Venus could have been habitable in the past is also quite possible, of course, we don’t have a time machine to go back and see how Venus was but recent stimulation work led by the Michael Way and Anthony Del Genio shows that Venus could have maintained liquid water for around 3 billion years only becoming uninhabitable just 750 million years ago, that’s around the same time that a global resurfacing event occurred indicative of some catastrophic volcanism episode.

This would have been a very bad time to have lived on Venus making Pompeii look like a sparkler by comparison although we can infer that this happened by observing the young smooth surface that we see from our probes. The cause is ultimately unknown one possibility is that although Venus resembles the earth it doesn’t have plate tectonics and so all of the internal heat and energy within that planet had no way to vent out until it reached some critical tipping point which ultimately ripped apart the entire surface. Nevertheless, in the three billion years of preceding habitability life could have been present on the surface and evolved the ability to float up into the clouds.

Okay so all of that is just to say that the idea of life on Venus isn’t that crazy and in fact, it’s been overlooked when it comes to previous NASA  missions and indeed many of the astrobiology studies.

Now let’s come to this new paper led by  Jane Greaves and colleagues with exciting results. You may think how is that astronomers could tell us there was life on another planet without physically going there, without landing on the surface or flying through the sky. Well just like star trek enterprise sensors you can tell a lot from afar you don’t always have to physically take examples to figure out what’s going on.

In this case, the team used two telescopes here in the earth which specialize in observing the sky at a wavelength in between the radio and infrared part of the spectrum thus known as the sub-millimetre. One of these telescopes ALMA has been in the news quite a bit in the last two years. Maybe you’ve heard of it, thanks to its gorgeous images of protoplanetary disks.so using ALMA and another telescope called JCMT the team found that Venus’s atmosphere had an absorption feature indicative of the molecule phosphine chemical symbol ph3. And that’s the key to this whole paper. It’s just noticing that the wavelength of light where phosphine likes to absorb light. So, we can infer the phosphine is there.

First off how statistically significant is this detection well the authors report this to be a 15-sigma detection. Talking OPERA experiment conducted in 2011 it found evidence for faster than light neutrinos to 6.2- sigma confidence but it turned out to be just a systematic error in their analysis. So, on that face 15 -sigma looks very secure but let’s remember that until it’s independently verified, we should remain cautious.

Now, why does this indicate life? Well, just last year some of the authors of this detection paper wrote another paper arguing that phosphine is a previously unidentified example of a biosignature. The biosignature is nothing but it’s just a chemical that indicates life. Oxygen is a classic example. Phosphine is a biosignature that is certainly less well studied but it is associated with anaerobic ecosystems hereon the earth. However, the actual metabolic pathway by which it is being produced in these anaerobic bacteria remains unknown.

So, if we accept phosphine as a biosignature and we accept that it was securely detected by this team does that mean then that we have seen direct evidence for life on Venus.

No not quiet and the reasons is because the phosphine indeed could be produced buy life but it could also be produced by non-life things such as geochemistry or photochemistry that just means when light is interacting with chemicals. Now the authors are certainly aware of this and argue that no known chemical pathways are likely responsible that is of course without life.

But chemistry is a myriad of mind-bogglingly complex possibilities. So, there’s always the chance of an unknown being responsible here and so this is why the authors themselves even state that even if confirmed we emphasize the detection of phosphine is not strong evidence for life only for anomalous and unexplained chemistry.

so, tell us what do think, and do you want to know more fascinating information about Venus then why don’t you comment down below…