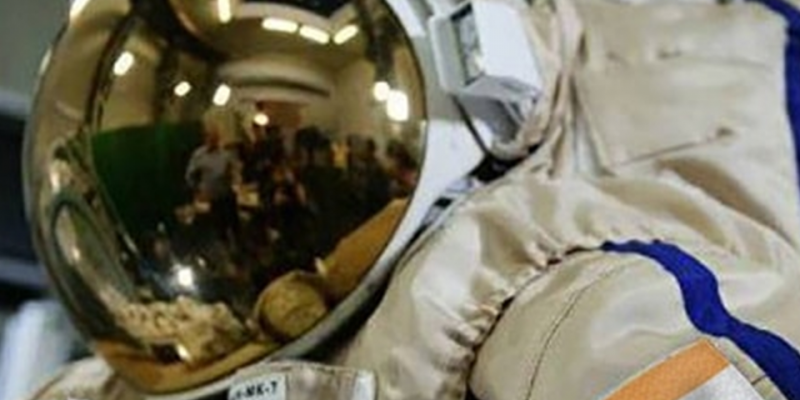 Humanity’s interest in space has been global and long-lasting. The curiosity to know the unknown, explore the boundaries of what we know, and where we have been helped us in pushing the boundaries of scientific and technical limits.

Human space exploration benefits us in understanding the root cause of our existence. It helps to know more about the solar system and galaxies. The exploration of space can be done by robots as well; then why manned mission?

The Manned mission is vital as human capability is required in space to install and maintain complex scientific experiments and to conduct field exploration. These tasks need human flexibility, experience, and judgment which is unlikely to be automated within the foreseeable future.

If I ask you where is India in the manned space mission, the upcoming Gaganyaan mission is the answer to it. Read on to know about this astonishing mission by ISRO!

The Indian Space Research Organization (ISRO) plans its first manned mission to space naming GAGANYAAN – will be the first Indian crewed orbital spacecraft designed to carry three people and orbit the Earth at 400 km altitude for up to seven days. The technical development and conceptual design of the vehicle started in 2006 under the generic name Orbital Vehicle.

The plan was to design a simple capsule with an endurance of about a week in space and a splashdown landing to be done after reentry. The Gaganyaan crew module is a 5.3 ton (12000lb) fully autonomous spacecraft matted to a 2.9 ton (6400lb) service module.

The space capsule will have a life support and environment control system for the crew and a crew medical kit, crew health monitoring system, Emergency survival kit, Dosimeters, Earmuffs, and Fire suppression system. The space capsule will be equipped with an emergency abort mission and emergency escape that can be done at the first stage or second stage of the rocket burn. 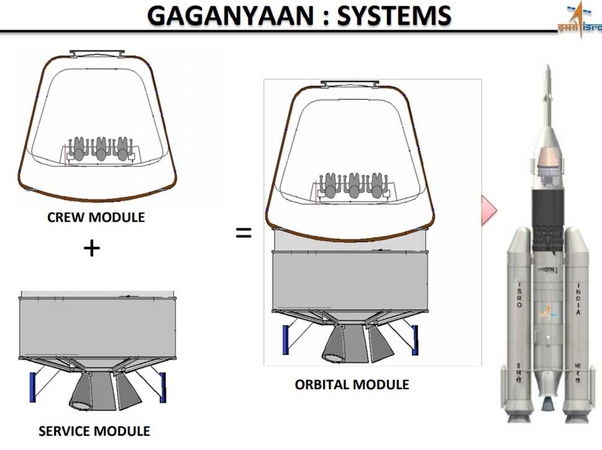 The GSLV Mk III is planned to launch with high thrust solid propellant strap-on boosters S200, the first critical booster segment of the motor case with a diameter of 3.2 meters, 8.5 meters in length, and weighing 5.5 tons has been indigenously developed and delivered by Larsen &Toubro to ISRO.

The ISRO has divided the Gaganyaan mission into 5 number of flights/ phases. These flights are:

The Re-entry Test of the boilerplate named CARE (LVM3-X) was performed on 18 December 2014, in which the spacecraft reached outer space and injected the crew module CARE at an altitude of 126km. Still, its trajectory intersects the atmosphere so that it doesn’t reach escape velocity or doesn’t complete one orbital revolution, commonly known as a sub-orbital regime.

The design utilised a Soyuz-shaped re-entry capsule with a mass of 3735 kg, a diameter of 3.100 m, and a height of 2.678 m. The ablative re-entry shield consisted of carbon phenolic tiles, with tan medium density ablative tiles covering the outer surface. After re-entry, at a velocity of 233 m/s, a pair of 2.3-meter diameter pilot parachutes stabilised the capsule.

This was followed by a pair of 6.2 m diameter drogue parachutes, which reduced the velocity to 50 m/s. At 5 km altitude, three 31-m diameter main parachutes deployed, and crew module splashed down near Andaman and Nicobar Islands in the Bay of Bengal about twenty minutes after lift-off. The capsule was splashdown in the ocean, followed by recovery by the Indian Coast guard. 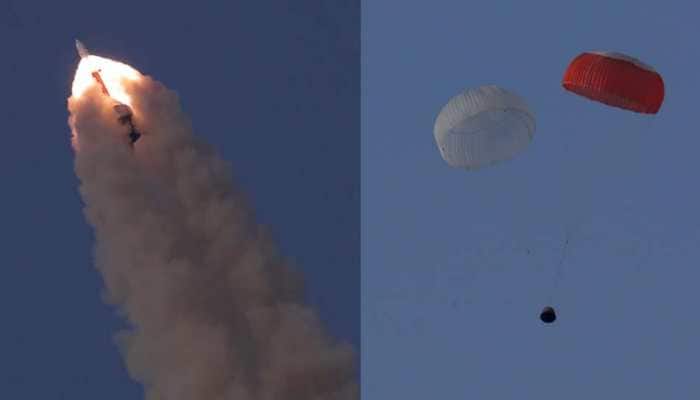 The Pad Abort Test was performed on 5 July 2018, in which the boilerplate of Gaganyaan was accelerated to Ten g (10g) and reached the highest altitude of 2.75km. After acceleration, the capsule is quickly separated from its launch vehicle and safely parachuted down and floated in the Bay of Bengal 2.9km away from its launch site.

It is typically controlled by various combinations of automatic rocket failure detection and manual activation for the crew commander’s use. It is similar to ejecting the fighter pilot’s seat, here instead of a pilot, the whole spacecraft crew module is ejected away from the launch vehicle. This can be implemented while the launch vehicle is still on the launch pad or in ascending phase.

Gaganyaan -1 was planned to launch before the 75th year of independence (15-August 2021), but due to the COVID-19 pandemic slowing down the progress, the timeline has been revised to December 2021.

Four Biological and two Physical Science-related microgravity experiments from academic institutions are shortlisted for the unmanned mission of Gaganyaan-1 and also expected to take Vyommitra, a female-looking spacefaring humanoid robot developed by ISRO, unlike the other nations taking animals. The Vyommitra will perform these microgravity experiments in unmanned space flight.

According to the ISRO mandate, two unscrewed missions need to be carried out successfully before the crew mission launch Gaganyaan-3, which is planned for 2023 now.

The Vyommitra will be present in this mission along the crewed flight to better understand the weightlessness and radiation effect on the human body while staying long in space. Vyommitra can mimic human activities, recognize other humans and respond to their queries.

The exhaust flames coming out of rocket engines by using unsymmetrical dimethylhydrazine as propellant and nitrogen tetroxide as the oxidiser in the liquid fuel engine stage of Mk III are toxic and harmful for the environment. To overcome this problem Liquid propulsion system centre under ISRO is working on Green Propellant.

A brief introduction to the Green Propulsion

Both hydrogen peroxide and its by-propellant are green, and the exhaust is even non-toxic. For the solid propellant, ISRO is based on Glycidyl Azide Polymer (GAP) as fuel and Ammonium Di-Nitramide (ADN) as an oxidiser at the laboratory level, which will eliminate the emission of chlorinated exhaust products from rocket motors.

ISRO has already begun the move towards environment-friendly and green propellants with the acceptance of Liquid Oxygen (LOX)/Liquid Hydrogen (LH2) and LOX/Kerosene-based propulsion systems for launch vehicles and the use of electric propulsion for spacecraft.

The LOX/LH2 combination is already being used in the cryogenic upper stages of GSLV and GSLV Mk-III launch vehicles. The Gaganyaan-3, which is a manned mission, will be using green propulsion in almost all the stages keeping in mind the safety of astronauts.

The space flight training of 4 astronauts started in February 2020. For the training, the astronauts were sent to Russia as part of the joint partnership between ISRO and the Russian space agency Roscosmos and return to India after spending nearly a year.

ISRO also signed an agreement with the French space agency, The National Centre for space studies (CNES), in which a 3-week training program for Flight surgeons was completed at ISRO.

The CNES is providing training to CAPCOM mission control teams in France at the CADMOS centre to develop microgravity applications and space operations at CNES in Toulouse and the European Astronaut Centre (EAC) Cologne, Germany.

The CNES will also provide equipment tested and still aboard of the International Space Station (ISS), fireproof carry bags made in France to shield equipment from shocks and radiation. Exchange of information on food packaging and the nutrition program will take place.

For the communication and keeping in contact with the Gaganyaan mission, ISRO was talking with Australia to have a ground station at the Coco islands. ISRO has several ground stations spread across the globe like Mauritius, Brunel, Biak, and Indonesia.

|| We hope you find the article informative and easy to understand. Kindly give your valuable feedback and share this blog with others. ||