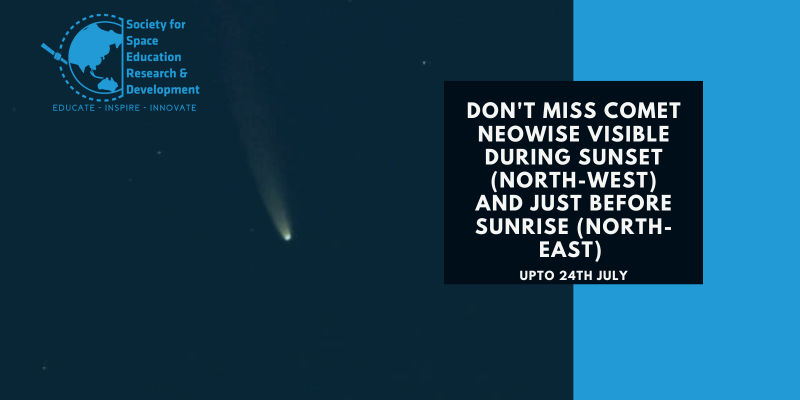 Comets are like cats – they have tails, and they do precisely what they want {David H. Levy}

July 2020 is probably the best month of the year as far as astronomy is concerned. It started with a penumbral lunar eclipse on July 5, the third one this year. After that Jupiter will make its closest approach to earth around July 15, when it will be at opposition. Followed by the closest approach of Saturn on July 21 (the opposition of Saturn) and finally a double meteor shower at the end of July. But the sky of July will be dominated by yet another celestial body, the recently discovered comet NEOWISE.

The comet’s full name is C 2020 f3 NEOWISE.  NEOWISE refers to the spacecraft that discovered it, f3 indicates that it is the third comet found in the second half of March so each month is split into two letters January is A and B, February is C and D and March is E and F. It was discovered on 27th of March. And 2020 is obviously the year it was found and C indicates that it’s a non-periodic comet that means it hasn’t been seen at multiple apparitions. Although we do know that it is a periodic comet because the orbit is going to bring it back in about six to eight hundred years.

So, the comet was discovered on its way in towards perihelion and of course people thought it might be a big comet, but we aren’t sure. We have seen comet Atlas and Swan both were predicted to be big comets and both fizzled out due to sun basically over-heating them but it reached perihelion at about 0.3 AU on July 3rd. Soon after people started submitting some amazing images showing the comet had brightened a lot. We have images from the space station, which is pretty amazing also Parker solar probe had a unique view point and it hurt the hardware to be able to image the comet on July 5th.

Well we can directly measure the nucleus while it’s inside, it’s a massive cloud of dust, it’s probably about 500km in diameter. This probably is the best comet since 2006 and also one that came very close to the sun and produced an amazing tale. It was also hard to observe because it was so close to the sun.

How to watch the comet?

NEOWISE swept within Mercury’s orbit a week ago and now it is streaking past the earth. Its close proximity to the sun caused dust and gas to burn off its surface and create an even bigger debris tail. Now the comet is headed our way. At the beginning of the month, the comet was visible just before the sunrise. But now it is visible even in the night sky. People living in the north have the best chance. If living at the latitude of the Indian subcontinent, around 20 degree north you can watch comet NEOWISE in the north-western part of the sky for about 20 mins after sunset. Use space apps to locate quickly.

For observers at the northern US latitudes, the comet still shows up at dawn. By mid of July, the comet will also become visible at dusk, low in the northwest horizon. The reason why it is visible at both dusk and dawn is that the comet is very far to the north. The farther north you are the more opportunities to see the comet. Though it’s visible with the naked eye, you will need a binocular at first place.

Once you spot it with binoculars you can remove them. Though it’s a bright comet, NEOWISE is still not the so called “Great Comet”. It is brighter than PANSTARRs and SWAN, but it is not great as Hale Bopp of 1997. It is expected to be visible with the naked eye through most of July 2020. Don’t miss this once in a life time opportunity as the comet will reappear again only in the year 8786!

The Sound Of The Cosmos