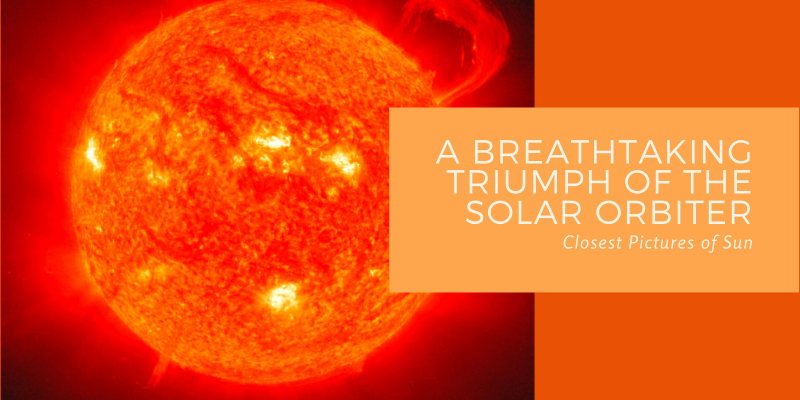 The first ever closest images of the Sun’s surface taken by the ESA-NASA’s Solar Orbiter mission, which denotes the start of the long voyage of the Solar Orbiter and is expected to capture much nearer images of the sun in an unexpectedly brief time-frame.

“These are only the first images and we can already see interesting new phenomena,” says Daniel Müller, ESA’s Solar Orbiter Project Scientist. “We didn’t really expect such great results right from the start. We can also see how our ten scientific instruments complement each other, providing a holistic picture of the Sun and the surrounding environment”.

The first images of miniature solar flares named as ‘campfires’ at the Sun’s corona where the temperature is more than million degrees Celsius, were captured by the Extreme Ultraviolet Imager (EUI). EUI is an instrument package of the Solar Orbiter which includes three telescopes and captures the different layers of the Sun’s atmosphere.

There are six remote sensing instruments which capture the pictures of the sun and four instruments to collect in situ information about the environment around the Solar Orbiter. Scientists did not anticipate the new discoveries from these instruments. On contrary to this thought, the EUI sent a detail data with new observations from the Sun.

“The campfires are little relatives of the solar flares that we can observe from Earth, million or billion times smaller,” says David Berghmans of the Royal Observatory of Belgium (ROB), Principal Investigator of the EUI instrument, which takes high-resolution images of the lower layers of the Sun’s atmosphere, known as the solar corona. “The Sun might look quiet at the first glance, but when we look in detail, we can see those miniature flares everywhere we look.”

Scientists have not yet confirmed whether the campfires are small versions of big flares or if they are driven by distinct mechanism. Theories suggest that these miniature flares and mini-explosions called nano-flares cause one of the peculiar phenomena of the Sun, the coronal heating.

Polarimetric and Helioseismic Imager (PHI) is another ingenious instrument abroad Solar Orbiter. This instrument estimates the photospheric vector magnetic field and detects the active regions of the sun, particularly the strong magnetic field areas from which the solar flares are originated. Energetic particles are emitted by the Sun during solar flares and when these particles interact with the Earth’s magnetosphere, they generate magnetic storm which affects the telecommunication network and the power grids on the ground. These energy particles also strengths the solar wind that continuously emerges from the sun to the space. The four in situ instruments onboard the Solar Orbiter distinguishes the magnetic field lines and the solar winds when it passes the spacecraft.

“Right now, we are in the part of the 11-year solar cycle when the Sun is very quiet,” says Sami Solanki, the director of the Max Planck Institute for Solar System Research in Göttingen, Germany, and PHI Principal Investigator. “But because Solar Orbiter is at a different angle to the Sun than Earth, we could actually see one active region that wasn’t observable from Earth. That is a first. We have never been able to measure the magnetic field at the back of the Sun.”

Since the launch of Solar Orbiter, there are two spacecrafts observing the sun from closest locations than any other mission. NASA’s Parker Solar Probe is much closer to the sun within nine solar radii, but the environment that close is extremely harsh for the instruments. It has one camera that’s facing away from the sun to watch the solar winds. Solar Orbiter is the limit where the cameras can take images of the sun.

As the solar orbiter moves further to the Sun, it is predicted to be more active that it’s current state. By 2030, Solar Orbiter will have nine planetary flybys, eight being with Venus and the other with Earth. This is done to have a fixed orbit around the sun.

“ In March 2022, we will have the first really close flyby, when we are at 30 percent distance of the sun to the Earth”. “We will gradually incline our orbit to see the polar regions for the first time”, Müller said. “That will be the last change of perspective, and it’s definitely worth waiting because we really believe this will give us a lot of new insight into the sun’s activity cycle.

The first and the detailed view of the Sun’s poles can be obtained by 2025 as the Solar Orbiter will be 17 degrees aligned to the ecliptic plane .Due to the recurring flybys with Venus and the gravitational pull of Venus, this inclination can be achieved. The primary mission phase of the Solar Orbiter ends by 2029, after which the probe will have an inclination of 33 degrees or more to the ecliptic plane. This will facilitate even better views of the poles.