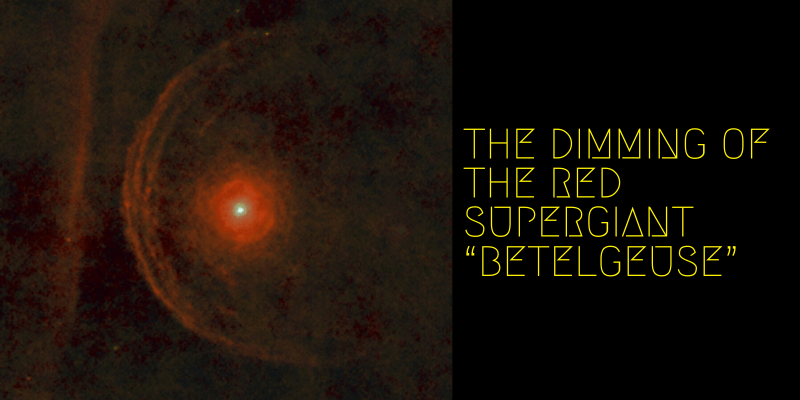 Like people, stars are born, they glow magnanimously for many years, they grow old and eventually die. The sad fact is that, our dear Sun too will one day die, although billions of years into the future. All stars in the Universe share the same fate – much as we humans do. What looks like a magnificent diamond stud in the heavens one day will simply die.

All stars including the Sun are born, they shine vibrantly for millions of years, and one day when they run out of fuel, they die. While that inevitable moment is billions of years in the sun’s future, a nearby star Betelgeuse may be facing a more imminent demise.

Betelgeuse is the orange-red colored star and one of the brightest stars in the night sky. After Rigel, it is the second-brightest in the constellation of Orion. Less than 10 million years old, Betelgeuse has evolved rapidly because of its humongous size and mass and expected to end its evolution with a supernova explosion, most likely within 100,000 years. As a result of its distinctive orange-red color and position within Orion, Betelgeuse is easy to spot with the naked eye in the night sky.

Red super-giant stars like Betelgeuse frequently undergo changes in brightness, but the drop to 40% of its normal value between October 2019 and April 2020 surprised astronomers. Starting October 2019, Betelgeuse began to dim noticeably, and by mid-February 2020 its brightness had dropped by a factor of approximately 3, from magnitude 0.5 to 1.7.

This drop in brightness to 40% of its normal value between October 2019 and April 2020 surprised astronomers and left them speculating if the star is at the end of its life and explode in one of the most powerful and dramatic events in all of the cosmos — a supernova.

However, further studies suggested that occluding “large-grain circumstellar dust” may be the most likely explanation for the dimming of the star.

Betelgeuse is a class of stars called red super-giant. The “red” means it is much cooler than the sun (e.g. a surface temperature of about 6000 degrees Fahrenheit, compared to about 10,000 F), and “super-giant” means both massive and with a large volume.

Betelgeuse is approximately 12 times more massive than the sun and almost about 860 million miles (1.4 billion kilometers) across, or 1,000 times wider than Earth’s star. If it were to be located in our solar system, it would be bigger than the orbit of the asteroid belt and perhaps even engulf Jupiter.

Live fast and die young is the mantra by which giant stars live, and the same is true with Betelgeuse. Betelgeuse is only about 10 million years old — compared to the Sun which is 4,500 million years old. Like all stars, Betelgeuse started its life by fusing Hydrogen into Helium, but it has run out of its Hydrogen supply. It then began fusing Helium into heavier elements. It is this transition to fusing helium that heated the core of the star and caused it to expand to its current enormous size.

Eventually stars run out of fuel and their cores are no longer hot enough to overcome the star’s gravity. Their cores collapse; their internal temperatures spike to incredible levels and the star then explodes. That is how large stars undergo supernova. Betelgeuse is approaching this phase and expected to  explode in Supernova in another 100,000 years.

The entire process of a star reaching the phase of Supernova takes millions of years, and witnessing a Supernovae event is a rare event for human beings. The last Supernova was observed in the Milky Way galaxy more than 300 years ago and recorded by the astronomer Johannes Kepler. Astronomers expect no more than 2 Supernovae events per century in the Milky Way. By this measure, we’re highly overdue for another.

One question that might be making rounds in your mind is – If Betelgeuse ever explodes in a Supernova event, is the Earth at any danger? Betelgeuse is around 700 light-years away from Earth. This distance would attenuate the impact of the blast. Although the high-energy light from the supernova will bathe the Earth’s ozone layer and scientists might be able to see this effect due to an increased ultraviolet radiation making to the Earth’s surface.

If Betelgeuse does undergo supernova, it will be the brightest star in the sky for many months (Except for the sun, of course). It will even be visible in daylight and could be as bright as the Moon during night time.

1987 was the last time when Terrestrial detectors on Earth got to monitor a supernova explosion and the outpouring of neutrinos that usually accompany it. This was when a star in a smaller galaxy orbiting the Milky Way detonated. Betelgeuse is much closer and more than 30 years of improvements in detector technology will give vastly improve measurements. The next Supernovae event would be exciting to see in the world’s telescopes. Gravitational wave detectors around the world would be able to measure distances smaller than the size of a proton, and will also be able to record Betelgeuse’s death knell.

Recent studies have shown that it is unlikely that the recent dimming of Betelgeuse is an indication that the star might be heading for a supernova. Occluding “large-grain circumstellar dust” may be the most likely explanation for the dimming of the star. It is likely that Betelgeuse sloughed off some material from its outer layers which is a common behavior for red super-giants. Red super-giants occasionally shed material from their surfaces, which will condense around the star as dust. As it cools and dissipates, the dust grains will absorb some of the light heading toward us and block our view.

Though Betelgeuse might just be dusty now, it will explode eventually. Astronomers expect that Betelgeuse will continue to burn the last remaining fuel for as long as 100,000 years, after which its core will collapse, and the star will undergo a Supernova. So, as exciting as it may sound, seeing Betelgeuse undergo a Supernova explosion is highly improbable during our lifetimes, however the star is still interesting to observe and study.