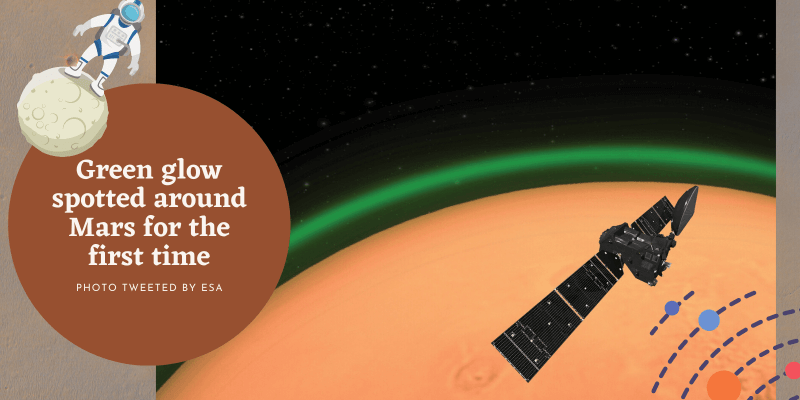 We call Mars the ‘Red Planet’, due to its coppery hue. But a European spacecraft has now detected a green glow around it. A similar glow is sometimes seen by Astronauts on the space station when they look to the Earth’s limb. As per a study published in Nature

The report says that the glow is caused by oxygen present in the planet’s atmosphere. This is the first time that such a glow has been observed on any planet other than Earth.

The glow that the TGO is seeing on Mars is an entirely different phenomenon, but it’s not unique to the Red Planet. Mars doesn’t have a strong magnetic field like Earth does, but it does have oxygen in its atmosphere. Those oxygen atoms get charged up by sunlight and then when they relax, they glow a pale shade of green.

Rather than looking straight down at a planet’s surface, it’s easier to spot this green airglow looking towards the horizon. So, the ESA team adjusted the angle of the ultraviolet and visible spectrometer (UVIS), an instrument on the TGO that’s often pointed at the ground.

Previous observations hadn’t captured any kind of green glow at Mars, so we decided to reorient the UVIS nadir channel to point at the ‘edge’ of Mars, similar to the perspective you see in images of Earth taken from the ISS

The team studied the atmosphere from this angle many times for more than seven months, scanning different altitudes between 20 and 400 km above the surface twice every four-day orbit.

The researchers also performed modelling work to better understand what’s driving the glow. Those calculations suggested the light is driven mainly by the breakup of carbon dioxide, which makes up 95% of Mars’ thin atmosphere, into carbon monoxide and oxygen. “The observations at Mars agree with previous theoretical models, but not with the actual glowing we’ve spotted around Earth, where the visible emission is far weaker,” Gerard said. This suggests we have more to learn about how oxygen atoms behave, which is hugely important for our understanding of atomic and quantum physics. “The emission was strongest at an altitude of around 80 km and varied depending on the changing distance between Mars and the Sun,” says Vandaele.

Astronauts have observed this happening around Earth, and to see it on Mars isn’t necessarily surprising, but it does offer researchers some information about the planet’s atmosphere. Predicting changes in atmospheric density is especially important for forthcoming missions.