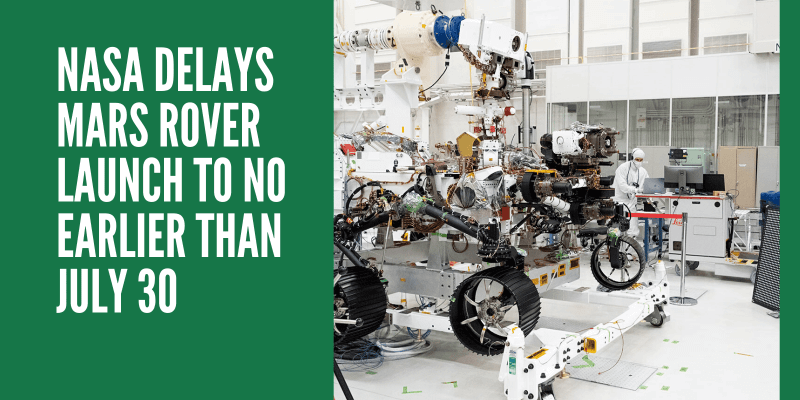 NASA delays the launch of its Perseverance rover until at least July 30 due to problems with its launch vehicle in latest setback to Mars 2020 mission.

NASA’s Mars 2020 mission has been delayed again and won’t launch until July 30 ‘at the earliest’ due to problems with the launch vehicle, according to the space agency. This is the second time the launch has been delayed in the past week – it was originally due, to set off on July 17 but this was pushed back to July 22. NASA has to get the Mars 2020 craft into space by August 15 or it will miss the ‘launch window’ for getting to Mars and will face a costly two-year delay.

“A liquid oxygen sensor line presented off-nominal data during the Wet Dress Rehearsal, and additional time is needed for the team to inspect and evaluate,” the memo read. ULA’s president and CEO, Tony Bruno, confirmed via Twitter Wednesday that it was a faulty sensor that had caused the delay.

Now, NASA is desperately hoping to avoid the same fate that befell the European Space Agency’s Mars rover, Rosalind Franklin. Thanks in part to the spread of the novel corona-virus, ESA’s rover will now lift off in the summer of 2022.  The journey to Mars is a tricky one. The orbital paths of Earth and Mars align just once every 26 months, so it’s imperative that Perseverance launch within its window to avoid a costly two-year delay.

The launch window is determined by the alignment of the Earth and Mars, with lift-off scheduled to ensure the shortest possible travel time between the two planets. Even if it is delayed until the last minute on August 15, NASA says the spacecraft and Perseverance rover will still land on Mars on February 18, 2021 at about 20:00 GMT. If it does miss the deadline and can’t launch by August 15 the $3billion cost of the Mars 2020 mission will increase by at least $500 million, NASA said.

The rover’s name, Perseverance, has taken on added meaning in the last few months, according to NASA officials, who say COVID-19 presented new hurdles. The corona-virus pandemic meant NASA scientists had to work in smaller teams, with some working from home, to meet the strict launch window deadline. The previous delay was the result of a contamination issue in the ground support lines at the NASA Payload Hazardous Servicing Facility. The original date was July 17, but due to ground system equipment problems involving a faulty crane the team pushed it to July 20 and then again to July 22.

The mission will take the Perseverance rover, along with the Ingenuity helicopter, to the Red planet to look for signs of past microscopic life and explore the geology of the Jezero Crater landing site. The Red Planet’s surface has been visited by eight NASA spacecraft and this one – the ninth – will be the first that involves gathering samples to bring back to Earth.